Chris Stapleton Lets The Music Do The Talking 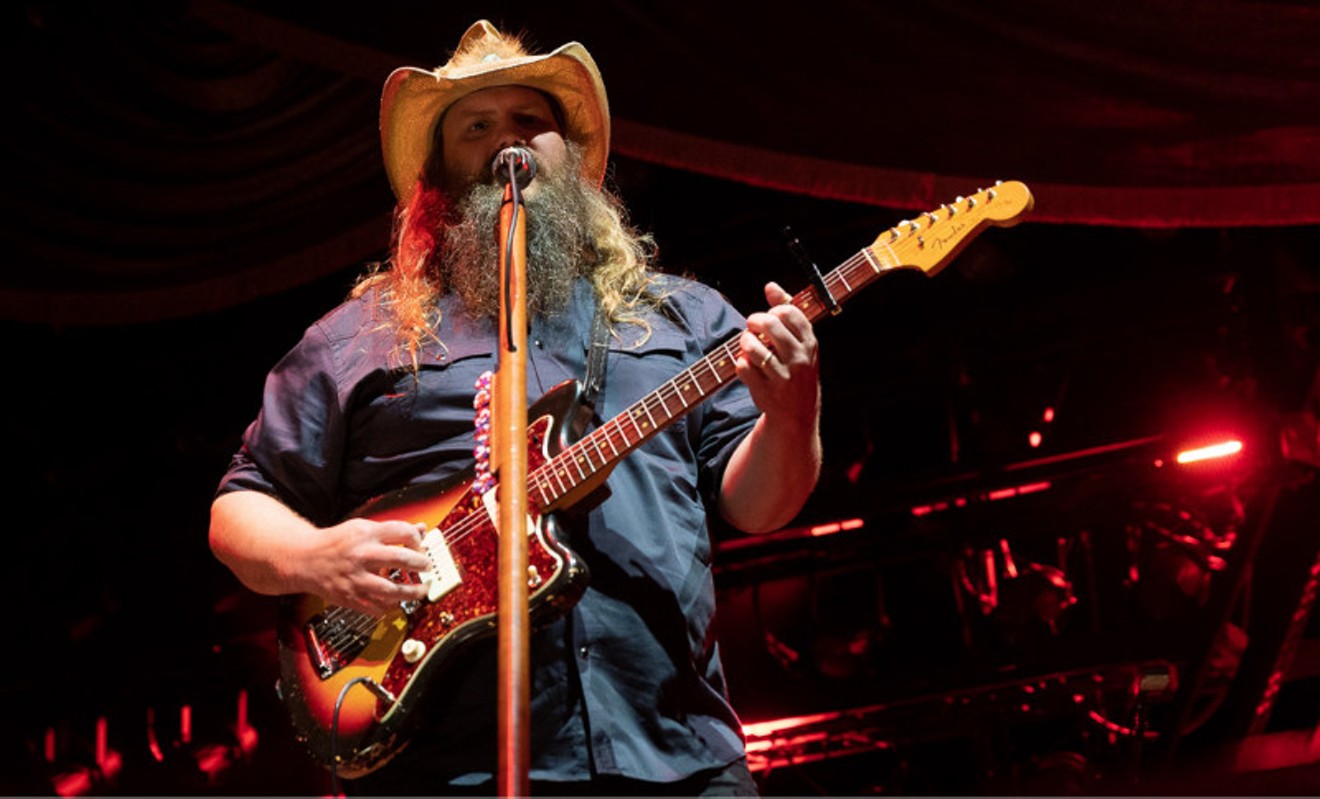 Chris Stapleton's All-American Road Show began way back in 2017, taking an understandable 18-month hiatus due the COVID-19 pandemic (during which Stapleton released his latest album, 2020's Starting Over). In 2017, of course, the Astros won the World Series.

So there's a kind of symmetry in that same tour ending its current leg on the same night as Game 1 of the Astros' latest trip to the championship. And it's a testament to Stapleton's popularity that a sold-out Woodlands Pavilion was as boisterous as it was.

Popularity, and authenticity. Stapleton's songs (last night's set drew from all four of his solo albums) are a satisfying blend of soul, bluegrass, country, and rock, delivered with an economic virtuosity that honestly renders further editorializing kind of moot. Stapleton is the opposite of a flashy performer, and doesn't need to be.

Boasting a soulful tenor to match formidable chops on both acoustic and electric guitar (makes me think of Claire the bartender's quote about country *and* western from The Blues Brothers), Stapleton does more with his minimalist stage presentation than many bands sporting twice the band members and ten times the pyro.

The set opened with a hell of a 1-2 punch: "Nobody to Blame" and "Parachute," two raucous numbers that  had a ... let's call it "festive" ... crowd engaged from the jump. Stapleton didn't even address the audiience until a few songs in, perfunctorily declaring "Hello, Texas" before admitting — as he's done at most of these shows — that he wasn't going to waste much time jawing.

Which isn't a problem when your repertoire includes songs like "Starting Over," "You Should Probably Leave" and "Traveler." The onstage ensemble ranged from the full band to solo Stapleton (a three-song selection that included "The first song I ever got on radio:" "Whiskey and You"), to a stripped down four-piece arrangement that offered some of the night's strongest cuts.

The burly, taciturn, and bearded Stapleton is far from the Platonic 21st century ideal of a concert headliner, but he doesn't have to be. Armed with musical virtuosity, a keen ear for melody, and the kind of voice that makes you contemplate day-drinking whiskey, Chris Stapleton could probably keep touring until the next time the Astros win the Series.

Which, if Game 1 was any indication, might be a very long time indeed.

The Crowd: Huge, though one suspects most are unaware Stapleton supports BLM.

Overheard In The Crowd:  "Elon Musk is the worst kind of human being."

Random Notebook Dump: "Get you someone who looks at you like Chris Stapleton looks at his wife Morgane while she's singing harmony."

SETLIST
Nobody to Blame
Parachute
Second One to Know
Starting Over
Millionaire (Kevin Welch cover)
Hard Livin'
Worry B Gone (Guy Clark cover)
What Are You Listening To?
Traveler
Whiskey and You
Arkansas
You Should Probably Leave
Midnight Train to Memphis
Might as Well Get Stoned
Cold
Free Bird / The Devil Named Music
I Was Wrong
Joy of My Life (John Fogerty cover)
Fire Away
Broken Halos
Tennessee Whiskey (David Allan Coe cover)

ENCORE
Outlaw State of Mind
KEEP THE HOUSTON PRESS FREE... Since we started the Houston Press, it has been defined as the free, independent voice of Houston, and we'd like to keep it that way. With local media under siege, it's more important than ever for us to rally support behind funding our local journalism. You can help by participating in our "I Support" program, allowing us to keep offering readers access to our incisive coverage of local news, food and culture with no paywalls.
Make a one-time donation today for as little as $1.