Love yourself. As platitudes go, it's simple to say, much harder to do. Christina Aguilera told an adoring audience last night at Smart Financial Centre it's not just one which bears frequent repeating, but it's been a central theme of the music she's wowed them with over nearly two full decades now. Judging by the good vibes of the night and the love shown to Aguilera, her “Fighters” have learned to live by that edict.

It’s been some time since Houston audiences or concert crowds anywhere have seen Aguilera live. Her last dedicated tour was for Back to Basics more than ten years ago. Back then, she performed at Toyota Center, a venue about three times the size of Smart and one that might seem more suitable for a pop star turned icon. But, she told the crowd, she’s chosen to play more intimate rooms like Smart on this tour so she could be closer to them. It wasn’t just a line. Throughout the night, she took time to thank fans for the letters they send, which she admits she reads on sleepless nights for comfort. She honored a fan’s wish for a hug, a simple gesture for her and a highlight-reel moment for the fan. She brought up an entire family for her show-closing number, the highly apropos “Let There Be Love.” The whole night was like a celebration between the therapist with the heavenly-gifted vocal range and the patients who have benefited from her advice and, in turn, enhanced her life. 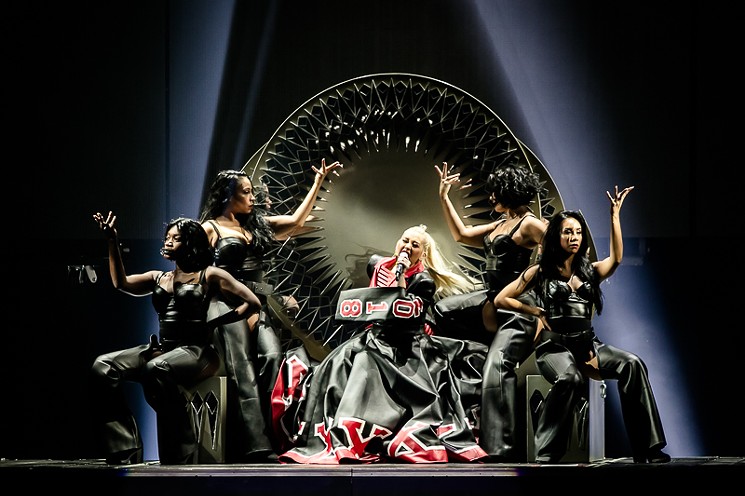 Aguilera's ready for her residency, Vegas
Photo by Violeta Alvarez

Another plus to playing smaller rooms is the whole show takes on the semblance of a Las Vegas production. We expected wardrobe changes befitting a music diva, but there were also video sequences galore to move the night along. Sometimes they set up the song, sometimes they served as a window for fans to peer back at Aguilera’s career, one which started in earnest when she was just seven years old, she reminded us. There were numerous set changes featuring everything from a high bank of stairs to a mini-Broadway scene played out by a pair of Aguilera’s dancers to her astounding take on James Brown’s “It’s a Man’s, Man’s, Man’s World.” If Aguilera is angling for a Vegas residency, the Liberation tour seems like a winning audition.

It was nice for the fans to have such proximity to her, too, of course. A young woman behind me uttered to her companion, “Oh my God, I can see her face, it’s right there,” when Aguilera descended from the (video projected) clouds and on to her place center stage for “Maria,” a track from the new album, which opened the show. It’s not like you had to be near Aguilera to enjoy the specific talent for which she’s best known and loved. When she let loose, as she did in the closing moments of “Genie In a Bottle,” high up the set list, well, you could have been outside the building and still appreciated what she was bringing.

The love fest continued through the night with Aguilera sometimes blocking songs together to recall specific albums, like a run from 2010’s Bionic, or back-to-back songs from films she’s been involved with over the years. Everything culminated with the lights up, so she could see her Fighters, and a special invite to the family of one of her dancers named Gilbert, a Houstonian. He said he’s been with Aguilera since the Stripped days and shed some actual tears during the encore, which kerfuffled Aguilera into losing her place on “Unless It’s With You.” Over all this time, though, she’s learned (and taught) it’s not necessary to be perfect to be loved. She laughed it off, resumed the song and brought Gilbert’s family onstage to dance the night away.

The Opener: It was uncertain how the crowd would respond to the ATLien attack of Big Boi. For one, he started his set about ten minutes past eight, which is a tad bit early for stank-nasty jams like “Southernplayalisticadillacmuzik.” Not only that, but show-goers may not have gotten the memo that Smart starts shows promptly. Many weren’t seated when he opened the night’s music with “ATLiens.” Then, there’s the fact that most in attendance were there to see their pop idol and not necessarily one-half of one of rap’s most influential duos. I mean, the second song of the set was “Rosa Parks” and that one barely had people in the crowd swaying.

It didn’t take long for folks to drop their inhibitions and get crunk, though. The first sign of any real dancing came during “So Fresh, So Clean” and after that Big Boi and his microphone cohort, Sleepy Brown, strutted through Outkast’s greatest hits (“Ms. Jackson,” “Elevators,” “B.O.B.”) and some of his solo work to get the party going. At one point, he had an entire H-town audience throwing up their “A’s” then he turned Pavlov and coerced the crowd into singing “Deep in the Heart of Texas” just by uttering the song’s opening line. He was so tickled by the call and response that he came back and did it a second time after show closer “Int’l Player’s Anthem” and filmed the whole thing for his IG page.

Personal Bias: My daughter is about a dozen years younger than Aguilera, so when Xtina was embarking upon her career, my kid was embarking upon her middle school years. Anyone who’s survived them knows how harrowing they can be and, though I like to think my wife and I gave our kids everything they needed to endure life’s challenges, we acknowledge and appreciate when outside forces helped along the way. Songs like “Beautiful,” the pre-encore show closer and one fans dared to sing along to, have helped my daughter and daughters and sons everywhere. Among all the self-affirming songs she’s produced, it’s the “love yourself” anthem. To get to hear it live brought a sting of tears to my eyes, thinking back on all the self-doubt any young person feels and knowing they’ve emerged safely years later. Beautiful stuff.

The Crowd: Gaga has Little Monsters. Beyonce’s got the hive. Christina Aguilera has “Fighters.” They waited a long time to get back in the ring with their champion.

Random Notebook Dump: I couldn't do this last night, decorum and all, but to the fellow who was behind me at the show telling some fellow audience members that Big Boi wasn't a central member of Outkast, please go back and read a rap history book before you hold another lecture on the subject. Thanks.

Aguilera got her Fighters going
Photo by Violeta Alvarez

So Fresh, So Clean

The Way You Move

Genie in a Bottle

What a Girl Wants

Come on Over (All I Want is You)

Keep On Singin’ My Song

Can’t Hold Us Down

Ain’t No Other Man

Unless It’s With You

Let There Be Love
KEEP THE HOUSTON PRESS FREE... Since we started the Houston Press, it has been defined as the free, independent voice of Houston, and we'd like to keep it that way. With local media under siege, it's more important than ever for us to rally support behind funding our local journalism. You can help by participating in our "I Support" program, allowing us to keep offering readers access to our incisive coverage of local news, food and culture with no paywalls.
Make a one-time donation today for as little as $1.