Chvrches Prove the Final Girl Can Be a Real Killer Live

Photos by Violeta Alvarez
At the end there was blood. The fake kind, of course, but blood all the same. Clad in a shirt and jean shorts, (fake) blood covering her arms, Lauren Mayberry had become the final girl she had worried about earlier in the set. But this was the final girl undefeated, the one who not just gets away, but makes sure whatever has been chasing her isn’t coming back.

It was the aesthetic climax to a show at White Oak Music Hall that was already a winner musically. From their earliest tours, Chvrches have always been a solid act, but with the addition of a drummer on their last few touring cycles, they’ve become a great live band. It’s not just the energy that live drums bring to the table, it’s in the freedom that all the members of the band now feel to rock out.

This is no longer a band content to stand behind their electronics, performing perfect recreations of their studio material. Much of the new material from Screen Violence shreds; not in the “play as many notes as possible” sense, but in the “intricate, The Cure-esque speed strumming” way. This is fine because the ‘80s goth/new wave synth guitar sound is the greatest guitar sound of all time.

While not all of their older material rocks as hard, a couple of their older tunes have gotten welcome updates. A mid-set highlight was a ferocious take on “Science/Visions” that felt like they might create actual electric arcs on stage from the force of their performance. And while “Recover” and “The Mother We Share” might not have had the same weight, they held their own with the newer tracks. 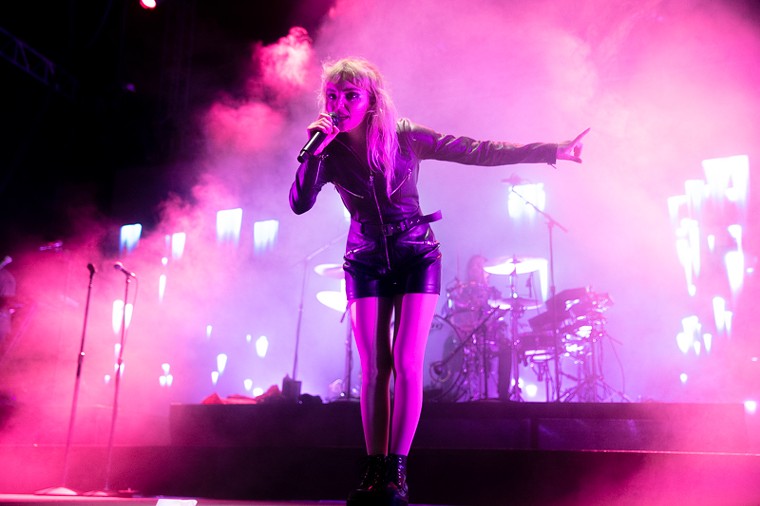 Photos by Violeta Alvarez
It feels like after a decade, Chvrches have reached their final, perfected form. They are equally adept at drawing laughs as they are generating tears, creating a show that can feel weighty without ever feeling like a burden. The song says, “There’s a final girl, and you know she should be screaming.” But maybe that scream should be one of triumph.

Personal Bias: I do not have the heart of a poet. I gravitate to songs that are straight-forward and easy to digest. I will never understand what “The Mother We Share” is about. I just know every time I hear it my heart smiles.

The Crowd: Maybe it was just my imagination, but it certainly felt like the crowd was giving each other a little more space than usual, in light of recent events.

Overheard in the Crowd: I’m not going to reveal any details because I don’t want anyone to find out how you really feel, but girl if you hate your job so much you’ve got to find a new one. No one should feel that unhappy on a show night.

Random Notebook Dump: I’m officially “my legs cramp trying to walk up the stairs after standing for a few hours” years old.

So, How Was The Opener: Donna Missal made a lot of new fans last night. She’s got a strong voice that makes her stand out in the realm of that modern synth-tinged pop; she has a second gear she can hit that a lot of vocalists would kill to have.
KEEP THE HOUSTON PRESS FREE... Since we started the Houston Press, it has been defined as the free, independent voice of Houston, and we'd like to keep it that way. With local media under siege, it's more important than ever for us to rally support behind funding our local journalism. You can help by participating in our "I Support" program, allowing us to keep offering readers access to our incisive coverage of local news, food and culture with no paywalls.
Make a one-time donation today for as little as $1.