Crunk Witch Believes in Love, Turns the Beat Up

There is music that just makes you happy to listen to it, and Crunk Witch’s self-titled fourth album is definitely on the list.

I’ve been a fan on and off for a few years of the husband-wife electro duo, who are coming to town this Sunday at Neil’s Bahr to celebrate the album’s release. Their music is instantly recognizable, but hard to quantify. It’s a sort of chip tune version of Electric Six, with the little of the headlong, unabashed dramatics of The Protomen and the playful pop of Hyperbubble thrown in for good measure. There is funk, there are beeps, there is bass and there are boops. The album is positively pulsating.

Love is the predominant lyrical theme of the album. The title of this article comes from my favorite line from “Drive,” a sentiment that comes screaming through most of the tracks. Brandon Miles and Hannah Collen must have a relationship for the ages because I can’t believe that any but the happiest couple on Planet Earth could continuously produce songs that so unabashedly celebrate simple affection against the electronic backdrop of their sound.

The must-hear track is “Sweat and Burn.” If you don’t sit up straight and plot to take over the world upon hearing it than I suggest you check your pulse to see if you’re dead. It’s a classic montage-style track that should be playing behind some old Hulk Hogan movie before the Hulkster saves the day. It’s utterly unapologetic in its sincerity and desire to lift the listener to elation on the back of nostalgia-driven pop.

I’m not going to lie; it’s candy music. As much as I love the occasional line I doubt there’s ever going to be a special edition lyric book dedicated to Crunk Witch. Cliché is a harsh way to describe the words to most of their music, but it’s also not inaccurate.

That said there are moments of transcendence. The short but sweet “Buttercup” is one of them. Have you ever found, like, the absolute perfect Hallmark card? That’s what “Buttercup” is, an ode to love that strikes a definite chord and tumbles into a lovely chaos at the end.

There’s some definite funk as well, who prefer their love a bit more physical. “Heatwave” is probably the best of those offerings. There’s a little bit of Michael Jackson lurking in the beats and all the playful sexuality of a Prince DCF track. I’m probably not allowed to specifically recommend that our readers have sex to a song, but if you’re going to bone anyway you could do a lot worse than having “Heatwave” or “Game of Love.”

Oh, and before we go, I’d like to acknowledge the H-Town love that gets dropped in the opening track, “Kings and Queens.” Crunk Witch knows that our city can bring a party, and I’m sure that’s why they’re making a stop here. As if it wasn’t already hot enough, they bring the heat on this album. 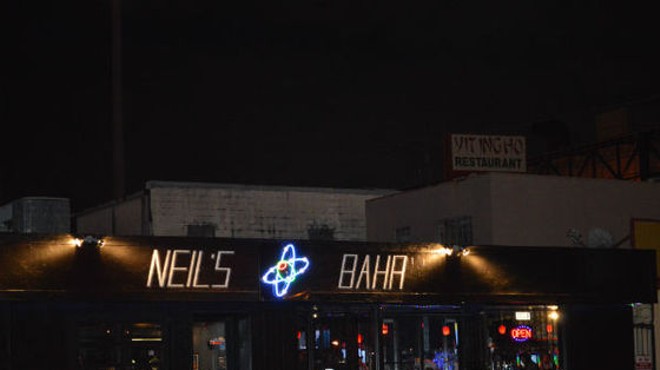 Crunk Witch plays Sunday, June 3 with Ryan Adam Wells at Neil’s Bahr. Doors open at 9 p.m. No cover.
KEEP THE HOUSTON PRESS FREE... Since we started the Houston Press, it has been defined as the free, independent voice of Houston, and we'd like to keep it that way. With local media under siege, it's more important than ever for us to rally support behind funding our local journalism. You can help by participating in our "I Support" program, allowing us to keep offering readers access to our incisive coverage of local news, food and culture with no paywalls.
Make a one-time donation today for as little as $1.