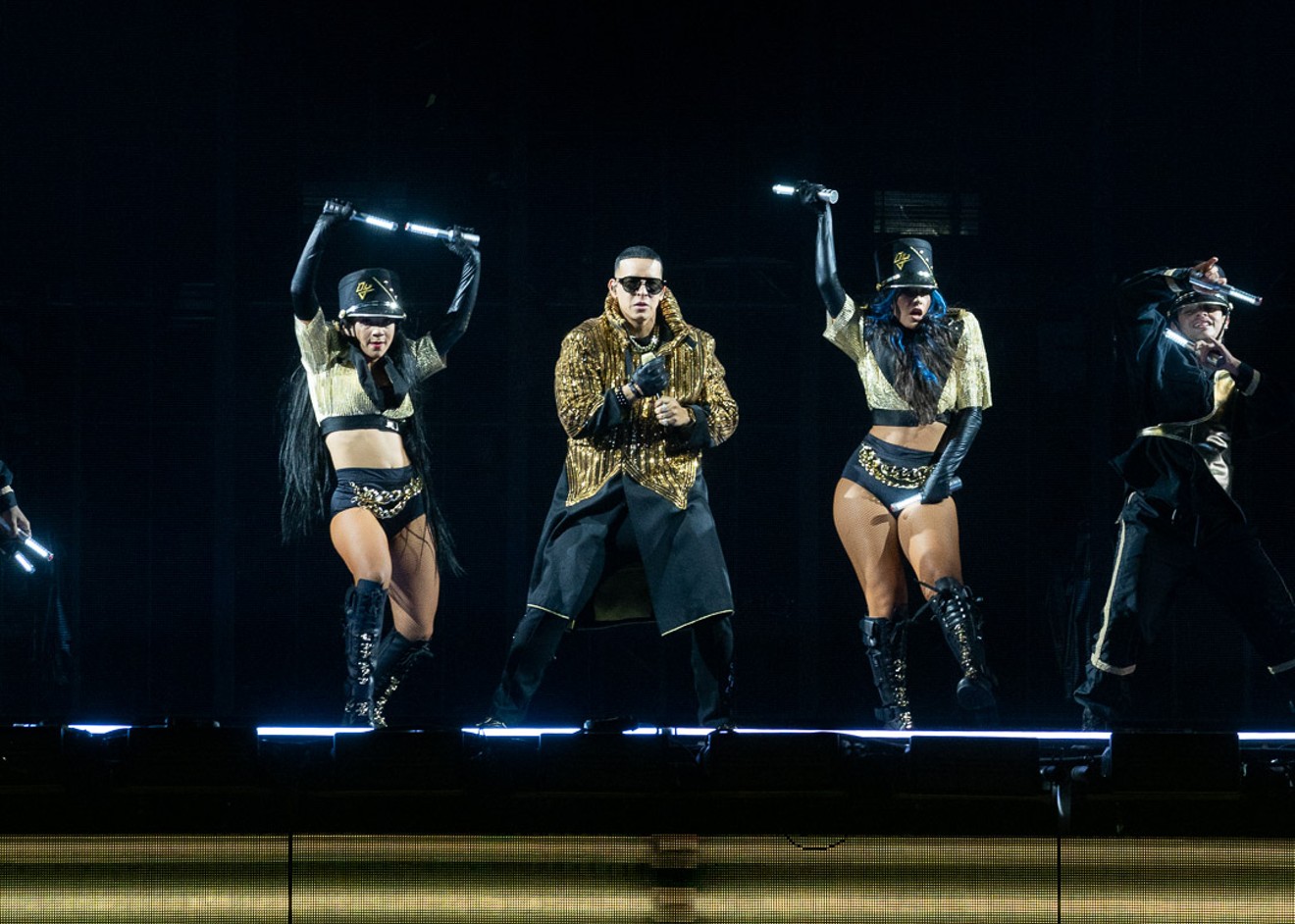 In another universe, Ramón Luis Ayala Rodriguez, known globally by his stage name Daddy Yankee, could have played third base in Major League Baseball. The former baseball prodigy from Puerto Rico was a talented prospect before a stray bullet shattered his dream of becoming a professional athlete. That bullet is still lodged in his hip, a constant reminder of what could have been.

Fortunately for fans of Latin music worldwide, Yankee focused his energy into his music, and became a legend on the stage. Not only is he widely credited as coining the term "Reggaeton", but also has elevated the genre into the large scale phenomenon that is at the top of the Latin music charts, and extending into mainstream pop music listened to by millions across the globe.

After 30 years in the music business, this will be Daddy Yankee's final as a touring artist. He is celebrating his retirement with La Última Vuelta World Tour, which stopped into downtown Houston Thursday evening. The venue was packed from the floor to the nosebleeds with fans of Yankee who were ready to dance the night away and say their farewells to the music icon. 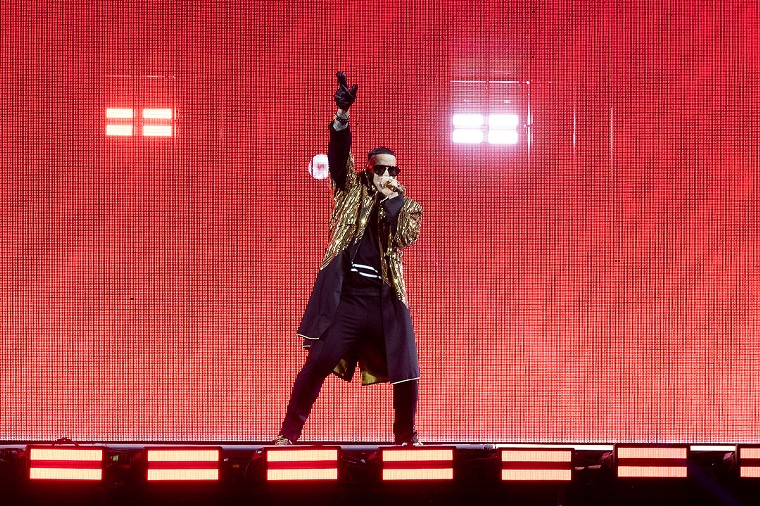 Daddy Yankee performed his hits from "Gasolina" to "Despacito" in front of a capacity crowd at Toyota Center.
Photo by Jennifer Lake
These were not the same super crazy, erratic, scantily clad fans we saw at the Bad Bunny concerts which rolled through the city earlier this month. This crowd was significantly more seasoned, with jobs and kids and responsibilities. Like myself, most of these fans were in high school and college when "Gasolina" hit the airwaves. Our formative party years were soundtracked by Daddy Yankee, and we were all here to pay our respects and show him the highest amount of praise possible.

Five minutes before 9 p.m., a countdown flashed onto the grandiose LCD screens that covered the entirety of the stage. When the countdown was over, the video board showcased a gold cargo jet that signaled the arrival of Mr. Yankee. With impressive stage design, pyrotechnics, lasers, and blinding LED lights, the night began with a literal bang and continued virtually non-stop for almost two hours.

After a trio of opening tracks that introduced us to his band, backup dancers, and his DJ, the supremely cool as ever Daddy Yankee performed "Rompe," a crowd favorite that induced fervent dancing in the aisles and smiles across the face of every fan in the arena. In fact, the first 10 tracks on the set list were highlights from his solo hits, which included "Lo Que Paso, Paso" and "Mayor Que Yo".

The rest of the evening featured the litany of collaborations that Daddy Yankee has accumulated throughout his long career. Everyone from Wisin and Yandel, Ozuna, Lunay, N.O.R.E., Ruaw Alejandro, Lil Jon, and yes.... even Bad Bunny were all displayed on the large LED screens almost like giant holograms, performing the track alongside and in sync with the headliner. 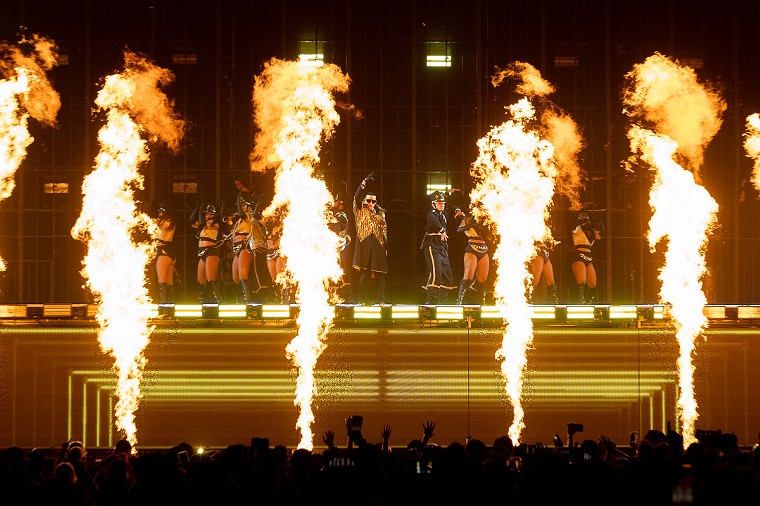 The stage production for Daddy Yankee's final tour was first rate, with blazing pyrotechnics, blinding lasers, and a giant LED screen that extended across the entirety of the stage.
Photo by Jennifer Lake
Some of the most impressive moments of the evening were the instances that featured rap freestyles from Yankee's sharp tongue. You can definitely see that he is a student of rap and hip-hop with the way he spit his rhymes in both English and Spanish, sometimes at regular speed and other times in rapid fire, 100-words-per-minute flows. He took these moments to call out all of the Latin American flags that were being waved in the crowd, from Mexico to Colombia, Peru to Puerto Rico. It really was a beautiful sight to behold, and very appropriate during the start of Hispanic Heritage Month.

Another awesome detail of the stage production was that every track was accompanied by its own art and theme that shifted from one song to the next. It started with the airplane scene, then a beach/water background, then '90s colors and lasers, and so on. One of the prevalent icons was a logo of a goat, which has been adopted as the emblem of Daddy Yankee, who many refer to as the "Greatest Of All Time", or G.O.A.T. in the realm of Reggaeton and Latin Music. Although the term "legend" gets thrown around very loosely nowadays, there is no question that Daddy Yankee is indeed the most legendary legend to ever exist in this space.

The hits kept rolling throughout the evening, with "Soltera," "Agua" and "Baila, Baila, Baila" being three of my personal favorites. I also really enjoyed his two tracks featuring Bad Bunny, which were "La Santa" and "X Ultima Vez". But we can never forget the smash hit "Despacito" with Luis Fonsi, which can certainly be considered as a "song of the decade" from 2010-2020. As much as that track gets overplayed, it definitely still bangs!

The night ended with three tracks that have earned Yankee his biggest commercial success. The first is "Con Calma," which was a huge No. 1 hit that samples and features the song "Informer" by the rapper Snow. That was followed by "Dura," which was dedicated to all the beautiful women in attendance. The final track of the night was "Gasolina," as we all expected.

I was certainly happy and excited to hear that track and see it performed live, but was a little bit sad as well. This meant that the night was over, and that this would be the final performance by Daddy Yankee in Houston before he retires from music.

All I can say is "Thank You".... for the music, the memories, and the inspiration to be a proud Latino, just like my boy Daddy Yankee. 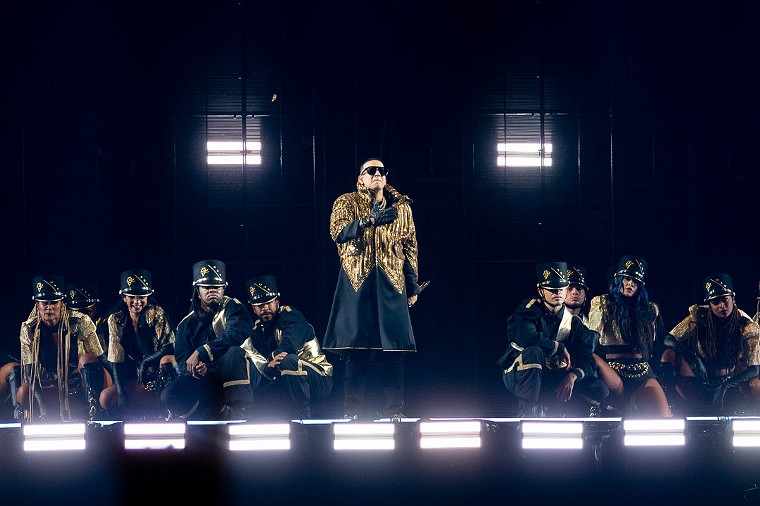 Thank you, Daddy Yankee... for the music, the memories, and the inspiration to be a proud Latino.
Photo by Jennifer Lake
KEEP THE HOUSTON PRESS FREE... Since we started the Houston Press, it has been defined as the free, independent voice of Houston, and we'd like to keep it that way. With local media under siege, it's more important than ever for us to rally support behind funding our local journalism. You can help by participating in our "I Support" program, allowing us to keep offering readers access to our incisive coverage of local news, food and culture with no paywalls.
Make a one-time donation today for as little as $1.