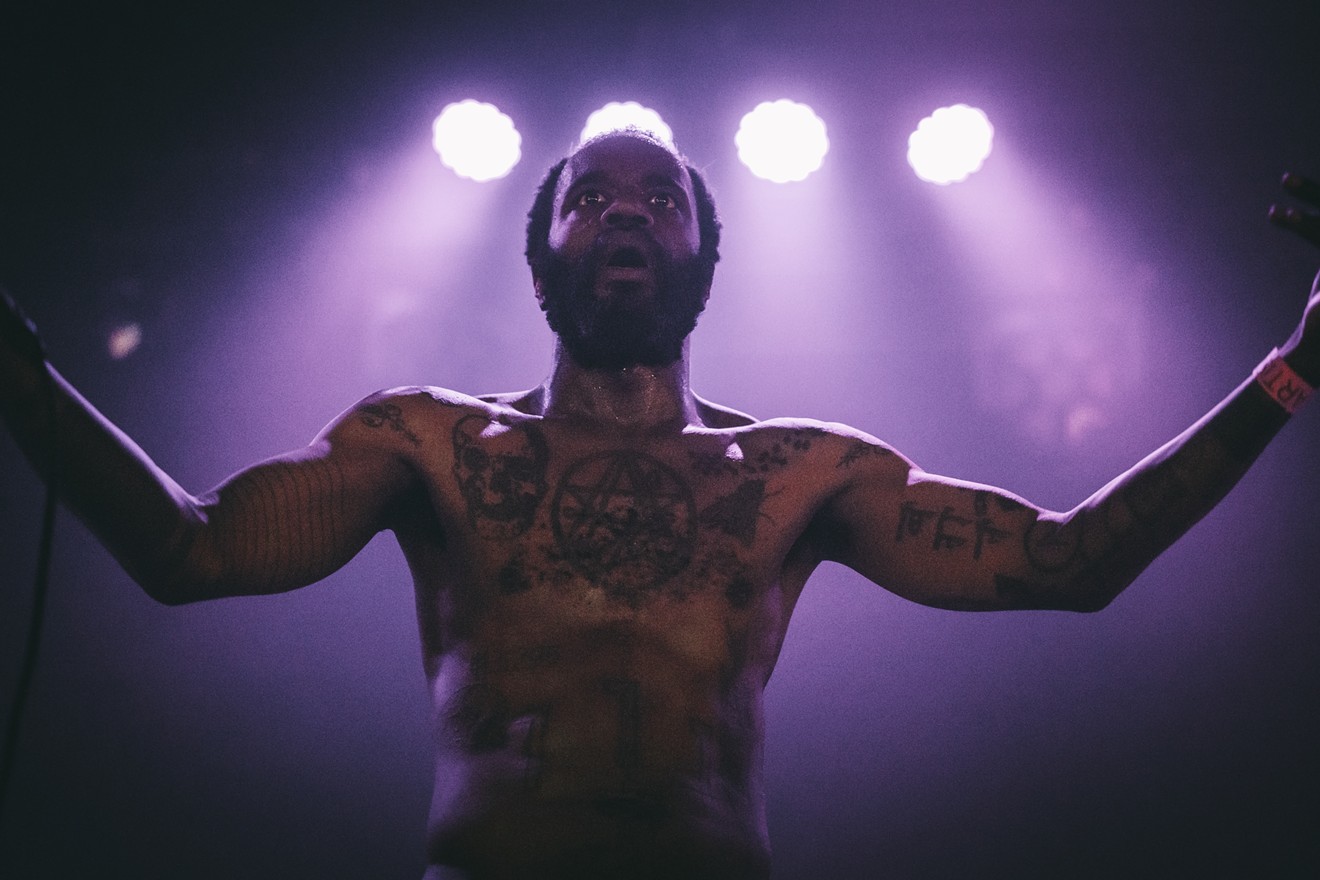 The raw energy that MC Ride and his trio brought to White Oak Music Hall had to be seen to be believed. Photo by Connor Fields
Anyone who has ever familiarized himself with the catalog of Death Grips knows their music isn’t the kind to be taken lightly. At first glance, the songs are angry and violent—crowded with an abundance of speed and confusion, taken to the extreme at every chance. This strange mix of hip-hop and nu-metal seems best suited for some kind of cinematic action scene. Or better yet, the type of music to fuel the destruction of our the sitting Commander in Chief’s Hollywood Star.

Despite the general brutality of the sound, the more you dive in, the more this noise becomes a standard for you to slowly find comfort within. This is the point where the listener can begin to truly enjoy both the surrealism and absurdism that follows this experimental hip hop group—and maybe even be moved to buy tickets when they come to town.

However, as any fellow first-timer surely learned on Saturday night, the magnitude of a Death Grips live show is something you simply cannot prepare for by merely scouring their Spotify account. From the moment this one took off, the night became a marathon of raw power and adrenaline that had to be seen to be believed.

Being part of a band infamous for bailing on shows at the drop of a hat, frontman MC Ride sent a current of energy throughout the audience simply by stepping out onto the stage. From that point on, Ride’s presence would control the audience like the sort of divine cult-like figure that he’s made out to be by the band’s rabid following. With early offerings like “I’ve Seen Footage,” Ride displayed this control by breaking the sold-out crowd into a frenzy, with the entirety of the venue either moshing, crowd-surfing, or screaming along to the wildly infectious chorus. Drummer, Zach Hill, played with an exhaustive pace that perfectly complimented the chaotic sound of Death Grips.
Photo by Connor Fields
Another aspect that played into the energy of set was the pure physicality of the trio. Despite the ill-lighted stage setup, the way in which each member could be seen moving about the stage, matched the intensity of the music coming out of them. During songs like “Get Got,” the shirtless MC Ride exhaustively whipped his spine back and forth with the drop of each downbeat. Following his lead, keyboardist Andy Morin sporadically bounced about his synth setup, while drummer Zach Hill put as much force as possible in each cymbal crash. Together, the unit transformed the stage of White Oak Music Hall into a mesmerizing display of masculinity—an intimidating but perfect setting for their diehard following to find their sweat-filled release.

Aside from the level of energy the band exuded throughout the hour-long performance, what made this particular set so intriguing was the ability of these three musicians to blend their uncommon pieces together to form such an implausible sound. For instance, accompanying the vocal attack of MC Ride was the equally aggressive synth play from Morin, which switched to and from a host of trap beats and industrial sounds. Floating in the background, was the blastbeat style of drumming of Zach Hill, whose relentlessness throughout the night was simply unfathomable. With songs like “Death Grips is Online,” this mixture of instrumentation and madness would teeter so close to the edge of being incoherent, that any resemblance of musicality was at risk of being lost.

However, what Death Grips certainly isn’t concerned with, is where they fall in terms of musicality or approachability. In fact, they and their fans crave the exact opposite, which at the end of the day is the real marvel of this group. This is a band that exists entirely in their own internet-fueled realm, where the more they do to derail their career, and the more they defy the norms of the industry, the more their mythic quality grows. After witnessing the scene they were able to create on Saturday night, it’s safe to say these tactics are paying off. After a performance like Saturday night's, don't expect Death Grips' internet-fueled world to die out anytime soon.
Photo by Connor Fields
KEEP THE HOUSTON PRESS FREE... Since we started the Houston Press, it has been defined as the free, independent voice of Houston, and we'd like to keep it that way. With local media under siege, it's more important than ever for us to rally support behind funding our local journalism. You can help by participating in our "I Support" program, allowing us to keep offering readers access to our incisive coverage of local news, food and culture with no paywalls.
Make a one-time donation today for as little as $1.