Debbie Gibson Is No Mere Nostalgia Act At House Of Blues 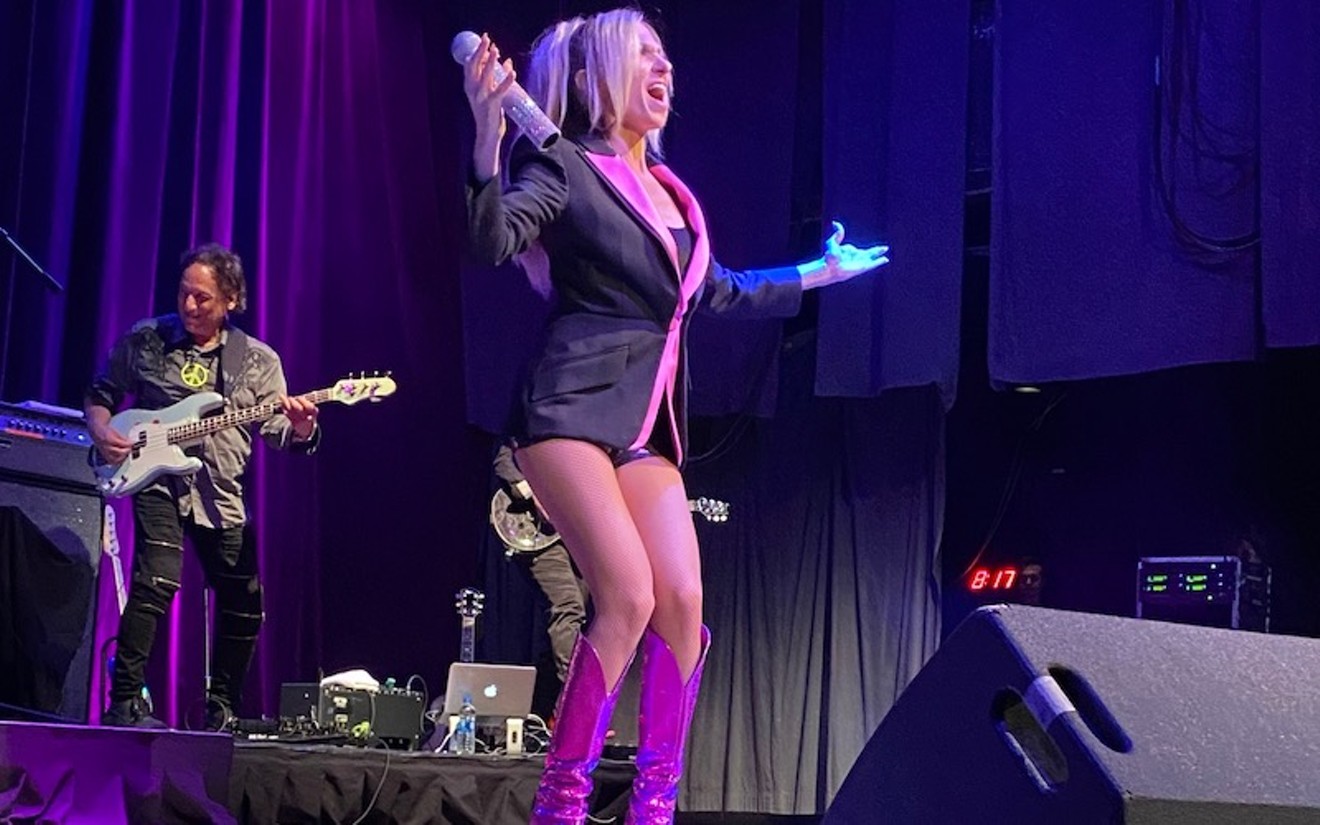 Rejoicing that there were no Mega Sharks in the crowd. Photo by Pete Vonder Haar
Debbie Gibson
House of Blues
June 18, 2022

You can't throw a limited edition Cabbage Patch Kid these days without hitting an '80s nostalgia tour. In Houston alone we just had the "Mixtape Tour" with New Kids on the Block and Salt-N-Pepa (minus Pepa), while Rick Springfield and Men At Work will be swinging through later this summer.

So perhaps you were dismissive when you heard that Debbie Gibson had scheduled a Houston stop for her The Body Remembers tour. "That girl who sang 'Electric Youth?' Is she still around?" You scoffed as you answered another Facebook personality quiz. "Is she still relevant?"

That's not for me to gauge, but I would point out her late '80s pop career was followed by a series of well-received theater roles, including Eponine in Les Misérables and Sandy in Grease, all while still releasing albums. Her most recent, The Body Remembers, came out just last year, and provided both the inspiration and a decent chunk of material for last night's House of Blues gig, which also showcased her skill as a stage performer

Gibson (and her erstwhile rival Tiffany) occupied a weird niche in pop music, situated between the libertine stylings of Madonna and the clinically packaged sexuality of Britney Spears and Christina Aguilera. Unlike those two, Gibson famously wrote the bulk of her own material. She holds the Guinness World Record for youngest female to ever write, produce, and perform a No. 1 single ("Foolish Beat"), and is still the youngest person ever to win ASCAP's Songwriter of the Year award (in 1989, when she famously tied with Bruce Springsteen).

I don't see a lot of three-hour performances on Gibson's résumé, but still. 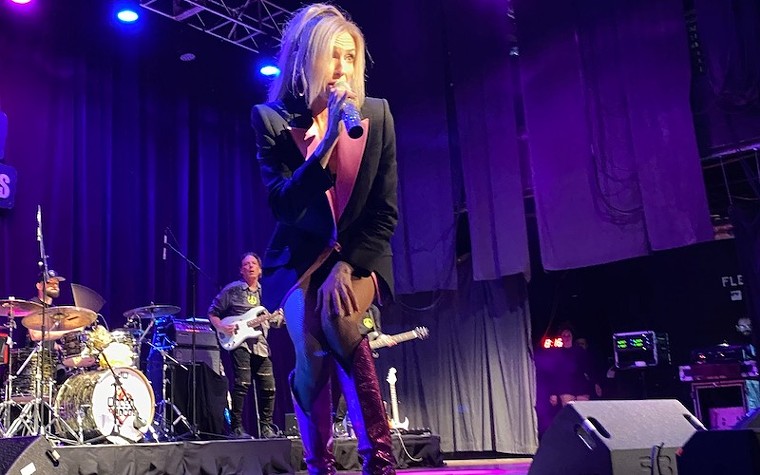 Gibson's only crime is loving "U2Much."
Photo by Pete Vonder Haar
The point is: few teenagers are going to believably write a song with lyrics like "hit me baby one more time" or "you gotta rub me the right way," but it's certainly not out of the realm of possibility for one to pen something as heart-on-your-sleeve earnest as "Foolish Beat." Gibson has always recorded and performed on her own terms, and last night's show definitely had the imprint of an artist in control of her craft.

She was up front with her audience about distancing herself from the "nostalgia act" label, asserting that, "I love doing the old hits in a new way." This included a downbeat "Shake Your Love" and "Electric Youth" mashed up with Portugal. The Man's "Feel It Still." To the crowd's credit, they were onboard with most of the experimentation while also offering appropriately wheezy Gen-X roars of approval after she introduced "Foolish Beat" as the song that hit  No. 1 as she was graduating high school.

As mentioned, Gibson's latest (The Body Remembers) figured prominently in the setlist, including "Girls Night Out" (mixed in with "Only In My Dreams"), "Runway," and the title track, which is ... not to mince words, a really good fucking song. Bouncy, uplifting, and with a killer melody, it really resonated with the  crowd.

I'm not sure why I was surprised. Call it a side effect of early onset music snob syndrome (a disease I thankfully outgrew some time in the early Aughts), but Debbie Gibson was not my jam in the late '80s. Which is too bad, because by writing and producing her own stuff, in many ways she embodied that indie ethic better than a lot of so-called punks did at the time. 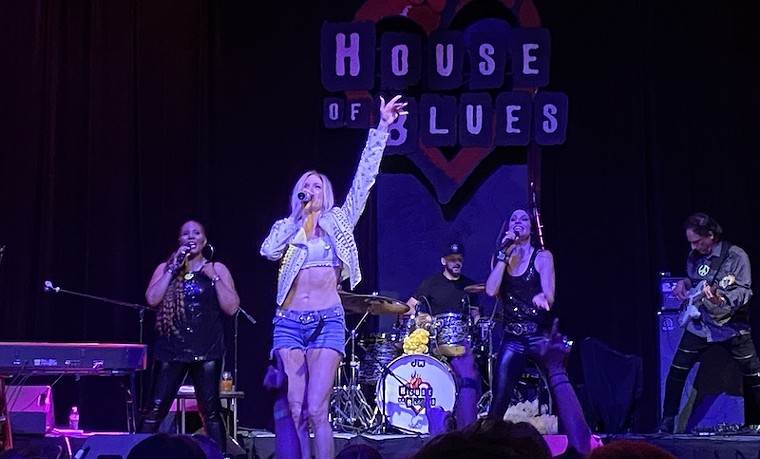 Not gonna lie, I'd wear this every day if my abs looked like that.
Photo by Pete Vonder Haar
And whatever your thoughts on her music, her affection for her fans certainly feels genuine. It often felt like she talked as much as Adele, but it was as much to thank her supporters for getting her through the last couple years (health scares and her mother's death) as it was to banter with her band (bassist Kirk Powers has been with her since her first tour) and her "Bookend Baldies" dancers, Eddie Bennett and Buddy Casimano.

Indeed, as the night went on, it really felt like being privy to a more intimate gathering. Gibson pointed out a friend in the audience whose wedding she'd recently attended and took requests ("Staying Together" and "Shock Your Mama"). At the end of the night, she brought about two dozen people on stage to sing "We Could Be Together," including a group of ladies she'd called out several times for their grotesquely neon wardrobe.

Fine, maybe she didn't use the word "grotesque."

Gibson and I are roughly the same age, but I'm clearly more of a cynic than she is, so anytime an artist invokes the idea of "music bringing us together and keeping us together," my hackles go up. But her rapport with her supporters sure feels authentic.

And maybe that's what sets her apart from the naked cash grab efforts of her so-called contemporaries, with the refusal to go the easy route contributing to her relatability. She's both a seasoned performer and someone who can sell a line like, "I really needed you tonight." 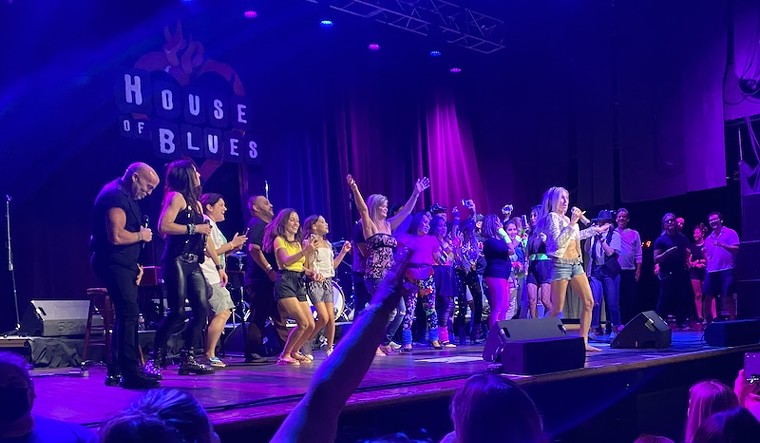 Clearly, my bowling shirt wasn't cool enough to get me invited onstage.
Photo by Pete Vonder Haar
Personal Bias: Until last night I was probably more familiar with her SyFy work than her music.

The Crowd: Outta here and feelin' fine, they're the class of '89.

Overheard In The Crowd: "What happened to 'Deborah?'"

Random Notebook Dump: "Nobody's fooled by your System of a Down T-shirt, chief."

SET LIST
LuvU2Much
I'm Still Standing (Elton John cover)
One Step Closer
Foolish Beat
Strings
Love Don't Care
Shake Your Love
Runway
Electric Youth / Feel It Still (Portugal. The Man cover)
The Body Remembers
Lost in Your Eyes
Dance 4U
Freedom
Jaded
What Are We Gonna Do?
Out of the Blue
Staying Together (audience request)
Shock Your Mama (audience request)
Legendary
Cheers
Only in My Dreams / Girls Night Out
We Could Be Together
KEEP THE HOUSTON PRESS FREE... Since we started the Houston Press, it has been defined as the free, independent voice of Houston, and we'd like to keep it that way. With local media under siege, it's more important than ever for us to rally support behind funding our local journalism. You can help by participating in our "I Support" program, allowing us to keep offering readers access to our incisive coverage of local news, food and culture with no paywalls.
Make a one-time donation today for as little as $1.