Texas Belongs to Deftones...and Rise Against

Texas belongs to Deftones. That’s not to imply that Rise Against don’t have their fair share of fans in the Lone Star State because plenty of people were singing along during their set, but when this coheadlining tour was announced there was always only one way a show in Houston could end: with Deftones on top of the bill.

To their credit, the set that Rise Against played felt every minute like a headlining one. In fact, once they finished up with the set closing “Savior”, it almost seemed weird like the crowd wasn’t heading toward the doors. It was dark, they had played over an hour, and while it wasn’t a massive production it did feel appropriately big for The Pavilion.

Rise Against wasn't perfect, but had the crowd singing along.
Jack Gorman
It was not a perfect set, but in between a few you could see the band that so often achieves greatness in smaller spaces. Part of the issue was muddy vocals, with Tim McIlrath being drowned out by the backing vocals at times. These issues were magnified when the band hit their faster songs like “Welcome to the Breakdown”, where it became hard to even catch the riffs as they played out. Still, the crowd was into it and received their mission statement and politics warmly. If any rock band could convince their fans to not bury their heads in the sand in 2017 America, it might just be Rise Against.

Deftones walked the tightrope of heavy and sexy the way that they typically do, making music that might make you want to rage one minute and grab your partner’s ass the next. They sounded absolutely massive, playing some of the biggest riffs The Pavilion is going to be home to until Houston Open Air rolls around. Musically, the band remains the tightest they’ve ever been, the set mostly flawless.

The vocals were what the vocals are typically at a Deftones’ show. You let Chino chase his vocal flights of fancy and you’ll wonder how he manages to survive a tour without mangling his vocal chords to shreds. You’ll be amazed by how beautiful he croons and you’ll cock an eyebrow when he lands in territory. Mostly it was just nice to get “” out of the way early when he had the best chance to hit most of the lyrics. 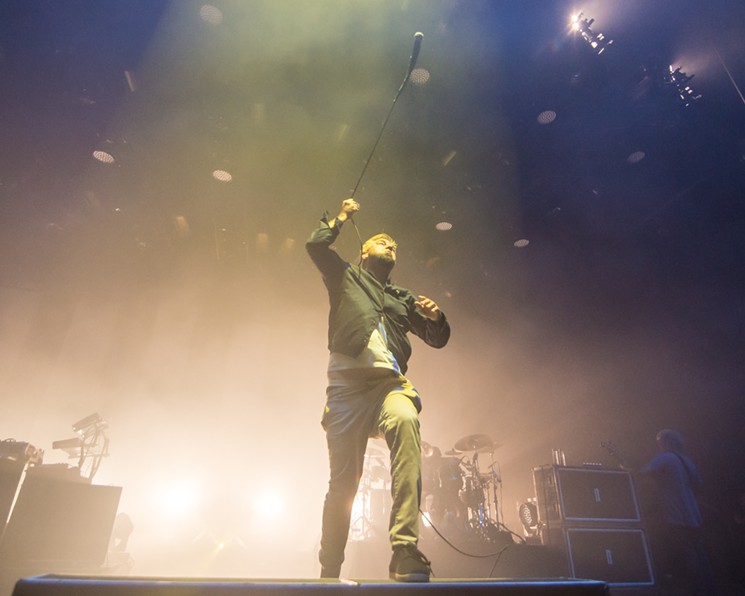 Jack Gorman
Deftones, as they told us before the tour started, took a light touch to the production side of things, mostly sticking to lights and a few motion graphics. It provided for some beautiful moments during the night, “Tempest” a highlight.

But whether they were keeping it simple with “Back to School” or stretching their songwriting skills with “Phantom Bride”, keeping it steamy with “Digital Bath” or pounding into “Swerve City”, the crowd was under their control the entire time. And why not: last time they played Revention there were so many people on the floor one could hardly move. Houston shows up for Deftones, and Deftones don’t let us down.

So, How Were the Openers: Frank Iero and The Patience have a good sense of melody but I can’t help but feel a few of their songs need more time in the oven before they’re done. Still, not a bad showing for a guy who could be headlining The Pavilion if his other band (My Chemical Romance) would get back together. I don’t know if I’ve ever heard a band at The Pavilion that sounded as good and clear as Thrice. They sounded simply majestic, and people should be throwing all the money they have to steal their sound guy away. For a band playing with the sun out, they did a good job of holding the crowd’s attention for the most part.

Personal Bias: It is perhaps unhealthy to treat art like one would treat sports, where you see the success of someone you support to be your own success. That said, as a long-time Deftones fan who has seen them so many there are tours I’ve forgotten I’ve been to, to see them on top of a bill at a venue the size of The Pavilion was personally gratifying. Rise Against are maybe my favorite singles band, in as much as there’s not a single record they’ve put out I have any interest in listening to all the way through.

The Crowd: Still plenty of us who aren’t afraid to rock our Texas White Pony Deftones’ tees.

Seen in the Crowd: The man to my left must have been made of money because he drunk himself into a stupor over the course of the night, to the point that after he fell asleep there was a serious question about whether or not he would wake up. He did, and he was everyone’s friend, in that weird way you think you’re everyone’s friend when you’re falling into them because you can’t stand up straight.

Random Notebook Dump: How we each individually process music fascinates me. When Rise Against played “Savior," I saw the following in my immediate vicinity: two bros clutching each other, jumping up and down; an older lady dancing like she was at a Stereo Live show; a woman clutching her chest, looking up at her man; and a dude with short hair, screaming the lyrics while standing like Phil from Pantera, body posture saying, “Come catch these hands.” Your humble writer simply bobbed his head with his hands in his pockets.