Turns Out Disturbed are Pretty Good Arena Rockers After All 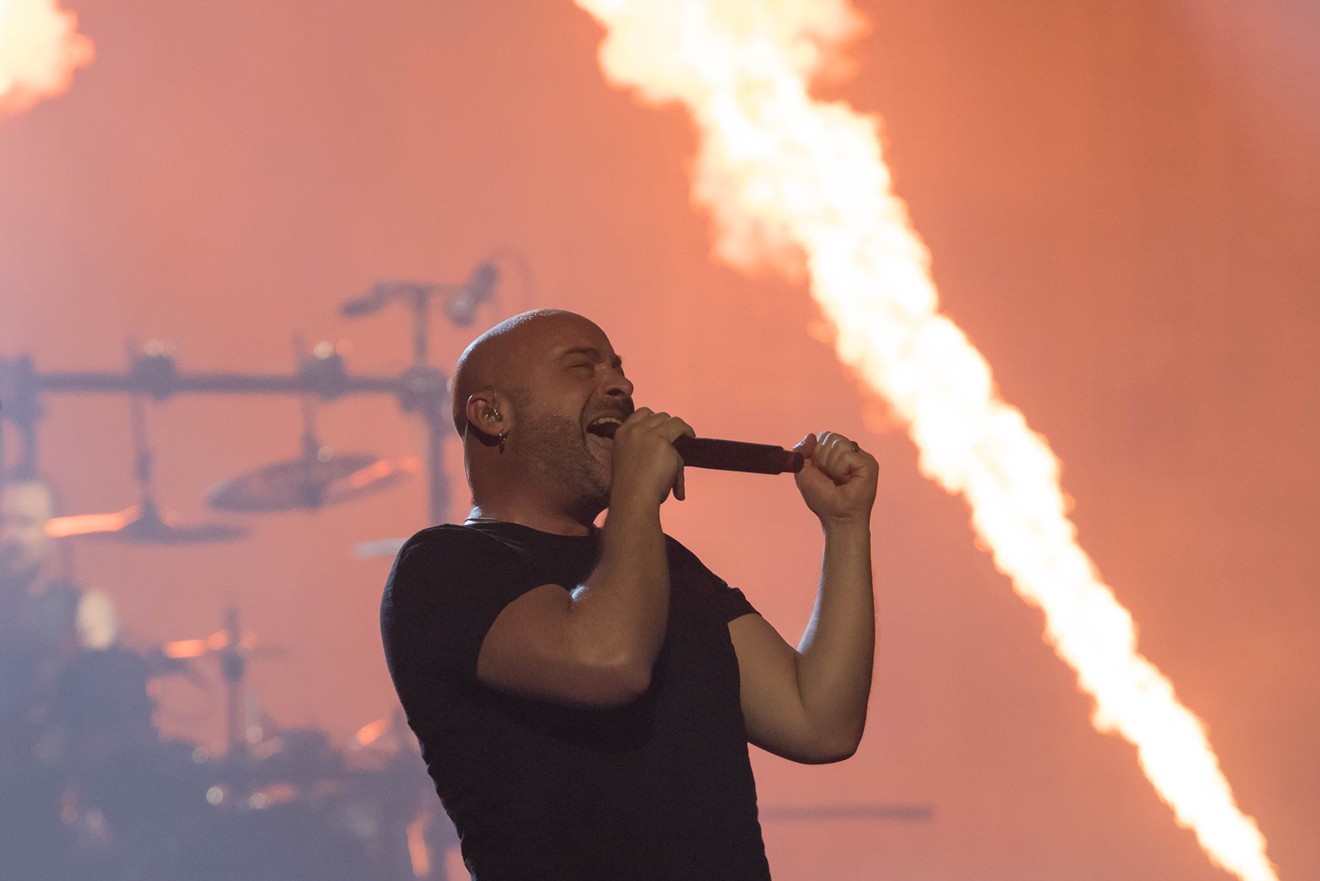 David Draiman speaks with conviction. I can’t say that I always agree with what he has to say, but the way he says it makes me want to. He’s the type of guy that could easily be a life coach if he wanted to go that route or play the slightly aloof but extremely intelligent wizard in some fantasy show. Sometimes he talks, and it’s really positive and uplifting, and then like a minute later he’s playing a song with lyrics like “I think that I could kill this time.”

But there’s less whiplash there than you might think. If the Evolution tour proves anything, it’s that Disturbed has become quite adept at being an arena rock band. Sure, over the course of their career they’ve played major shows, but as recently as 2016 they were playing just up the street at the House of Blues. Now they’re a well-oiled big rock production with pyro, a mini-stage they use for an acoustic set, and solos for all the musicians in the group. It’s the type of big rock show you only see a few times a year at Toyota Center, even rarer from acts that had a hit after the year 2000. 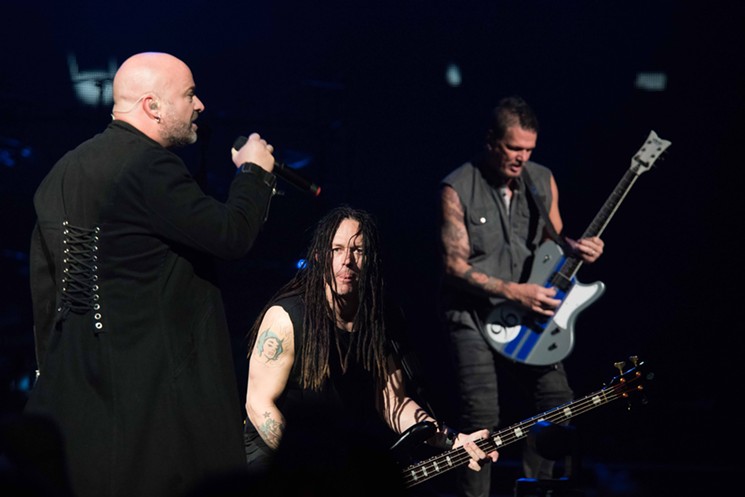 Disturbed's grooves sound tight as ever.
Photo by Jack Gorman
And so they’ve learned how to mix the dark, violent themes of their early work with their more uplifting, softer material. “Voices” is still a banger, but “Hold on to Memories” pairs with it well enough. The crowd didn’t seem to mind at all, pushing and shoving when the songs got rough, holding up their cell phones when things went light. There were people who left after they performed their version of “The Sound of Silence,” which was well before they played “Down With the Sickness,” which is a sentence that if sent back in time ten years would have made someone’s head explode.

But the important thing is that they make all of it work, from Draiman’s methodical movements across the stage to the flaming piano that would make Rammstein jealous. It’s not even that hard to imagine a version of the band that doesn’t play the really old stuff anymore. Evolution is a strange process, especially if you survived nu-metal. But if the “Oh, ah, ah, ah, ah” guy can create a safe space — not that he’d use those words, most likely — for people to talk about suicide, addiction, and depression, maybe we can finally put “Down With the Sickness” to bed.

Unless, of course, they want to celebrate 20 years of The Sickness next year. That would be pretty sweet in an arena.

So, How Was the Opener?: It’s pretty rare that a crowd chants the opening act's name, but about 3/4ths of the way through their set that happened for Three Days Grace. They’re a band pretty much engineered for big opening slots and radio festivals: enough hits that get the crowd riled up without really needing more than 45 minutes of stage time. Matt Walst fits so well into the band I didn’t realize he was the “Porn Star Dancing” guy instead of their original lead singer. Unfortunately, their new songs without Adam Gontier aren’t quite as strong as the old stuff.

Personal Bias: The Disturbed songs that were in Rock Band were crazy fun to play on the drums. I’m still a big fan of their first two records quite a bit, and I will always mourn just a tiny bit that they got rid of the more electronic elements of their sound after the first record. Clearly, it worked out well for them.

The Crowd: At one point the band asked the crowd for a moment of silence, and to their credit, about 95 percent of the audience complied. Good on everyone.

Overheard in the Crowd: “They made me throw away my pepper spray,” a woman told the child she was with. Well, yes, that tends to happen when you try to bring pepper spray to an event at the Toyota Center.

Random Notebook Dump: Thinking about Disturbed’s pivot to ballads leading to arena rock success, I will pull a muscle laughing if Weezer’s pivot to viral covers does the same for them this year.
KEEP THE HOUSTON PRESS FREE... Since we started the Houston Press, it has been defined as the free, independent voice of Houston, and we'd like to keep it that way. With local media under siege, it's more important than ever for us to rally support behind funding our local journalism. You can help by participating in our "I Support" program, allowing us to keep offering readers access to our incisive coverage of local news, food and culture with no paywalls.
Make a one-time donation today for as little as $1.