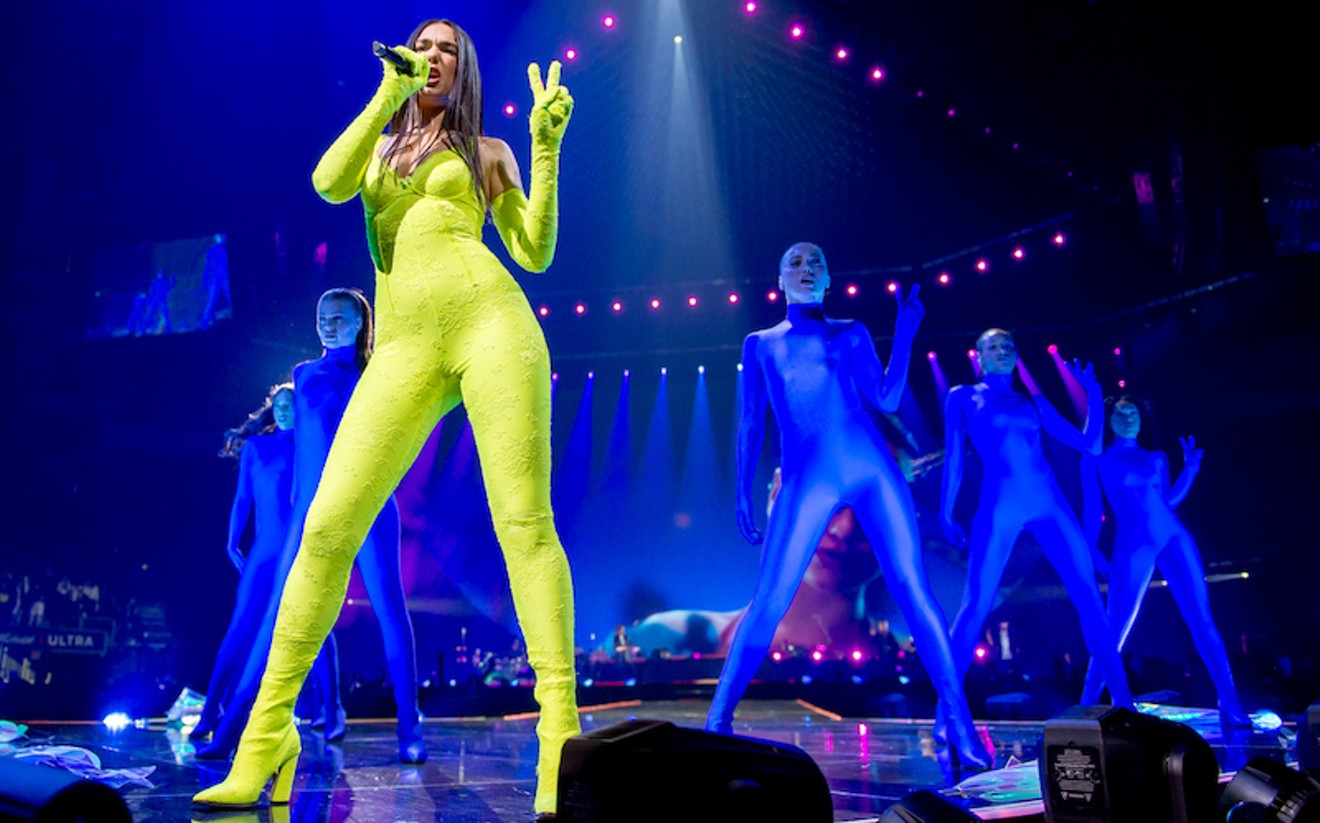 To call Dua Lipa's rise "meteoric" wouldn't be wholly inaccurate. Future Nostalgia is only her second album, after all, but was the most streamed album of 2020 on Spotify and yielded four platinum-selling singles that are nigh inescapable on radio both satellite and terrestrial.

Her tour of the same name landed at the Toyota Center last night, demonstrating both that her popularity definitely translates to a live audience, and that disco never really died.

Several years' worth of reviewing — for lack of a better expression — dad rock shows has left me out of practice for attending gigs that require multiple costume changes. Lipa had four to mark the various "acts" that made up the show. Those and the kinetic performance she puts on left me exhausted, and I was sitting on my ass most of the time.

I did get up for "Hallucinate" and "Levitating." I'm not made of stone.

A mere 26 years old, Lipa was amazingly poised and in command throughout a show that included, in no particular order, singing on a suspended platform (the aforementioned "Levitating"), a virtual duo with Elton John ("Cold Heart"), numerous dance sequences, and a chancy escape from an evil lobster.

Been reviewing concerts in this city for over a decade and I can honestly say this was the first one to feature a giant onstage crustacean. And that includes GWAR.

Laying down some "New Rules."
Photo by Jack Gorman
She also performed the entirety of her first act in a yellow unitard while her backup dancers sported blue outfits, a nod to Ukraine. A child of Kosovo Albanians, Lipa has expressed support for that country's resistance, and last night's display was a powerful one, even if it may have gone over the heads of many there.

Speaking of the audience, it was easily the most glittery Toyota Center crowd since Lady Gaga last played there. As always, massive props to those who choose a night with temperatures in the 40s to sport their reflective minidresses and booty shorts. They were treated to an impressively elaborate stage presentation and plenty of props for the LGBTQ+ community.

A self-proclaimed fan of our fair city, Lipa singled out the "people and the food and the atmosphere" while also declaring Houstonians "a lively bunch." Faint praise? Perhaps, but she did post a bunch of Instagram pics from the Johnson Space Center, so we should probably give her the benefit of the doubt.

Those unfamiliar with Dua Lipa's music might have been surprised to hear how cohesive each individual song is. She's quite masterful at tunes that build to a "wow" finish (as Rick Blaine might say). "Be the One" and encore "Don't Start Now" being perfect examples of this.

Talent, advocacy, and work ethic have definitely paid off. Dua Lipa had the Toyota Center eating out of her hand, as evidenced by the number of folks still in their seats during the encore. I'm no prognosticator, but I think this kid is going places.

Personal Bias: None, really. Took my 12-year old daughter and she had a blast. That'll do.

Overheard In The Crowd: "Now you better fucking follow me." Spoken by a 30-something dude after giving his Instagram handle to a couple of teenagers in one of the most pathetic exchanges I've ever witnessed, and I remember high school me trying to ask girls out on dates.

ENCORE
Future Nostalgia
Don't Start Now
KEEP THE HOUSTON PRESS FREE... Since we started the Houston Press, it has been defined as the free, independent voice of Houston, and we'd like to keep it that way. With local media under siege, it's more important than ever for us to rally support behind funding our local journalism. You can help by participating in our "I Support" program, allowing us to keep offering readers access to our incisive coverage of local news, food and culture with no paywalls.
Make a one-time donation today for as little as $1.