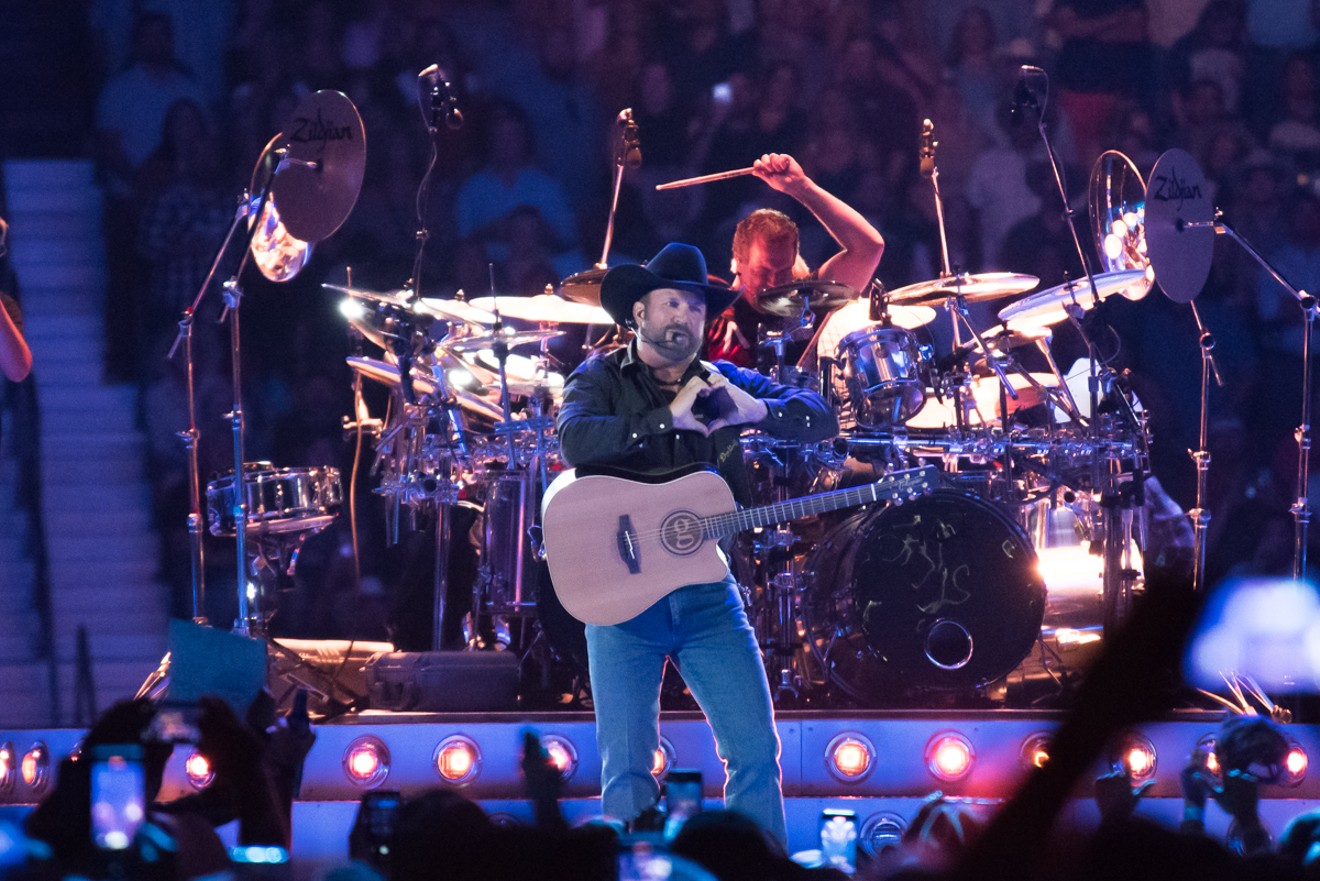 Garth Brooks ended his Stadium Tour with a night at NRG Stadium in Houston, Texas. Photo by Jack Gorman

The art of reading the room is one of the most important tools that a performer can master when executing a presentation. When we spoke to Garth Brooks at the pre-show press conference, he had the following to say about the room he was set to perform in on Saturday night in Houston.

"It's always been a guaranteed good time here, so it's fun! They know their country music and I think I am now finally in a room full of George Strait fans, so that's fantastic! Its also easier to talk to people when they're five feet in front of you than when they're across the dirt" declared Brooks, referencing his previous performances at RodeoHouston.

Saturday night was the last stop on The Stadium Tour for Garth Brooks and his crew, and he vowed to bring everything to the NRG Stadium stage and promised a once-in-a-lifetime experience for his fans.

There certainly was a palpable electricity as we walked into the arena from Kirby Drive. It was a sea of cowboy boots, lovely couples, and hardcore Garth fans who showed up to witness one of the world's greatest entertainers light the stage on fire with his No. 1 hits, deep album cuts, and several surprises throughout the evening.

After a duo of opening acts hit the stage, it was finally time for the main event. The lights dimmed low as Garth's band and backup singers moved into position. That's when we heard a familiar computer-generated voice over the speakers: 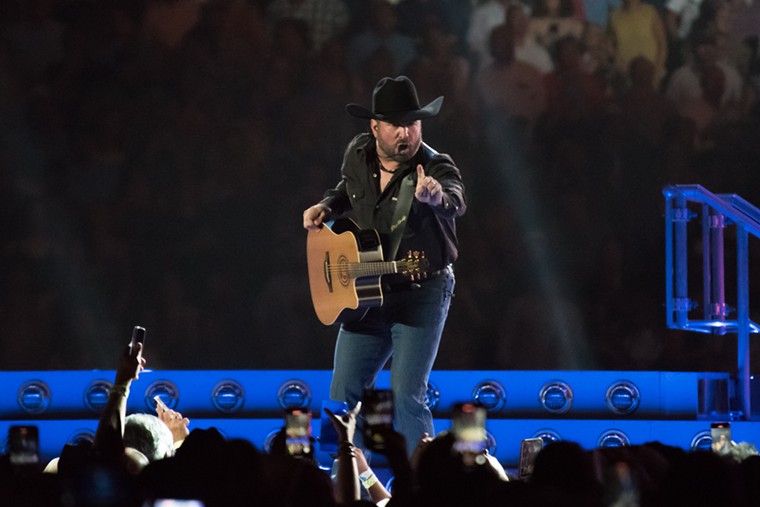 Garth Brooks is a master showman and one of the greatest entertainers of all time, delivering a stellar performance inside NRG Stadium in Houston.
Photo by Jack Gorman
"Alexa... play Garth Brooks live from Houston, Texas!"

A loud road could be heard and felt as the band rumbled the first few notes of the opening track "All Day Long". And then there he was, entering the stage in grand fashion, elevated from a hidden platform underneath the drum set in the middle of the massive stage... Mr. Garth Brooks.

"Somebody's got to start the weekend, somebody's gotta get all rowdy, and raise some hell in here!" sang Brooks as he grabbed his guitar and paced across the performance platform. Wearing his signature mouthpiece microphone, black cowboy hat and boots, the man named Garth quickly won over this crowd by displaying immense love and energy towards the capacity crowd in the arena.

"Tell me it's going to be like this all night long!" yelled Brooks as he waved at the crowd, blowing kisses and making the heart gesture with his hands as he thanked everyone for the love. He completed the opening trio of songs with "Rodeo" and "The Beaches Of Cheyanne".

There a thing that Garth does at his shows where he acknowledges his fans in the crowd and reads their handmade signs, and if those signs have a song request on them, he will venture off-script and entertain that request. He did this several times during last night's show, the first time was for the fan favorite ballad "She's Every Woman."

After that number, Brooks smiled and laughed with a super wide grin. "If we're just going to throw the set list away, then I guess we better start now!" He then proceeded to perform a heartfelt cover of "Amarillo By Morning" by George Strait, standing side by side with his fiddle player on one of the stage runways, illuminated by three spotlights beaming down from the rafters.

It was supremely noticeable that Garth was enjoying every second of the evening, soaking in the moments and reciprocating the energy that his fans dedicated his way. He thanked the Lord for the ability to play this last show inside an air-conditioned stadium, not having to worry about the weather.

"I am the captain of this ship" he said with a chuckle. "I could do this every night! Its my turn to dictate the weather, and I say let the thunder roll!" And yes, that's exactly when he performed extended version of his all-time hit "The Thunder Rolls."

Garth Brooks and his all star band provided Houston with one of the best concerts in the 20-year history of NRG Stadium.
Photo by Jack Gorman
This moment occurred 10 songs into the night, and there was still 20 more songs on the set list! He was definitely prepared to pay any overtime penalties if the show ran overtime. He began right around 9:15pm, and the last notes from his guitar stopped vibrating at 11:36pm.

"Some of these songs are older than most of you in this stadium" he laughed as he played "If Tomorrow Never Comes," "Everytime That It Rains" and "The Dance" from his debut album from the year 1989.

The last song before the two encores was the ultimate Garth Brooks fan favorite "Friends In Low Places". Now I'm sure we've all sung this track before... in the car, at karaoke, at a wedding. They have even made it a habit to play it in between innings at the Houston Astros games, which is always a fun time.

But let me tell you what (in my most country, Southern drawl)... this song live is an absolute masterpiece. The set up, the punchline, the payoff, and that third verse. Houston really showed out last night, singing along as loud as I've ever heard a crowd do so inside NRG. The ground shook and the walls vibrated due to how hard and loud everybody sang along. It was truly a magical moment.

And just as you thought the show was winding down, a certain Mrs. Trisha Yearwood joined her husband onstage to sing a cover of "Shallow" from the movie A Star Is Born. She was bedazzling in a pantsuit covered in rainbow sparkles with a microphone to match. The audience went absolutely wild to see her on stage, and cheered with immense joy when she followed with "She's In Love With The Boy".

Encore No. 1 ended with appropriately with "Standing Outside The Fire." After his band retired to the dressing rooms and Garth took a quick break, he appeared once again front and center. He picked up his guitar and played a trio of acoustic covers that punctuated the night perfectly. 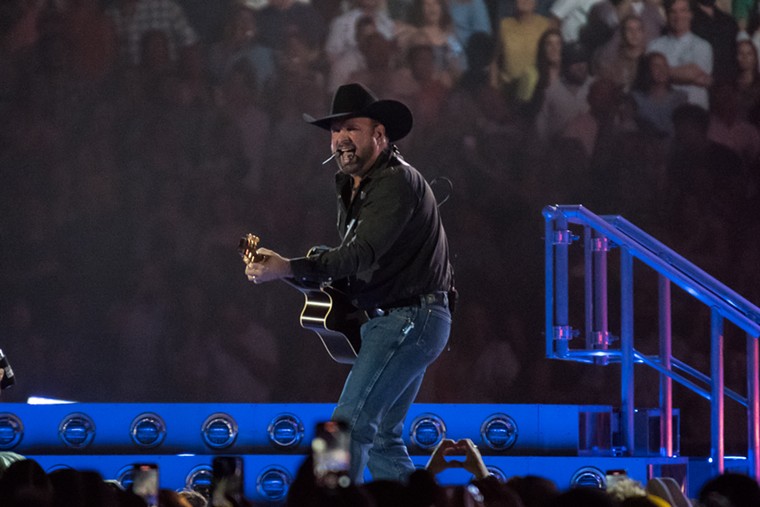 From "Friends In Low Places" to "Standing Outside The Fire" and everything in between, Garth Brooks gave his fans an abundance of energy all night long.
Photo by Jack Gorman
First up was "Piano Man" by Billy Joel. Even without the harmonica solo, Garth showed us why the track is an all-time classic composition of American music history. He followed that with the third verse of the country music standard "You Never Even Called Me By My Name" by Steve Goodman, although most fans are most familiar with the David Allen Coe version.

The final song of the night was "American Pie" by Don McLean. Heartfelt, emotional, and a perfect way to say goodbye.

Thank you Mr. Brooks for an absolutely fantastic evening. There have certainly been a few amazing performances throughout the 20-year history of NRG Stadium, but this show on this night was probably the best I've ever seen. It was an honor to be inside the building and singing along with almost 100,000 Houstonians that will never forget this night.

As we walked out of the stadium down the long hallways and into the hot summer air, the fans didn't want the party to end. A group of friends began to sing "Friends In Low Places" a cappella, and that led to everyone around them singing along. A beautiful way to end an equally beautiful night.
KEEP THE HOUSTON PRESS FREE... Since we started the Houston Press, it has been defined as the free, independent voice of Houston, and we'd like to keep it that way. With local media under siege, it's more important than ever for us to rally support behind funding our local journalism. You can help by participating in our "I Support" program, allowing us to keep offering readers access to our incisive coverage of local news, food and culture with no paywalls.
Make a one-time donation today for as little as $1.