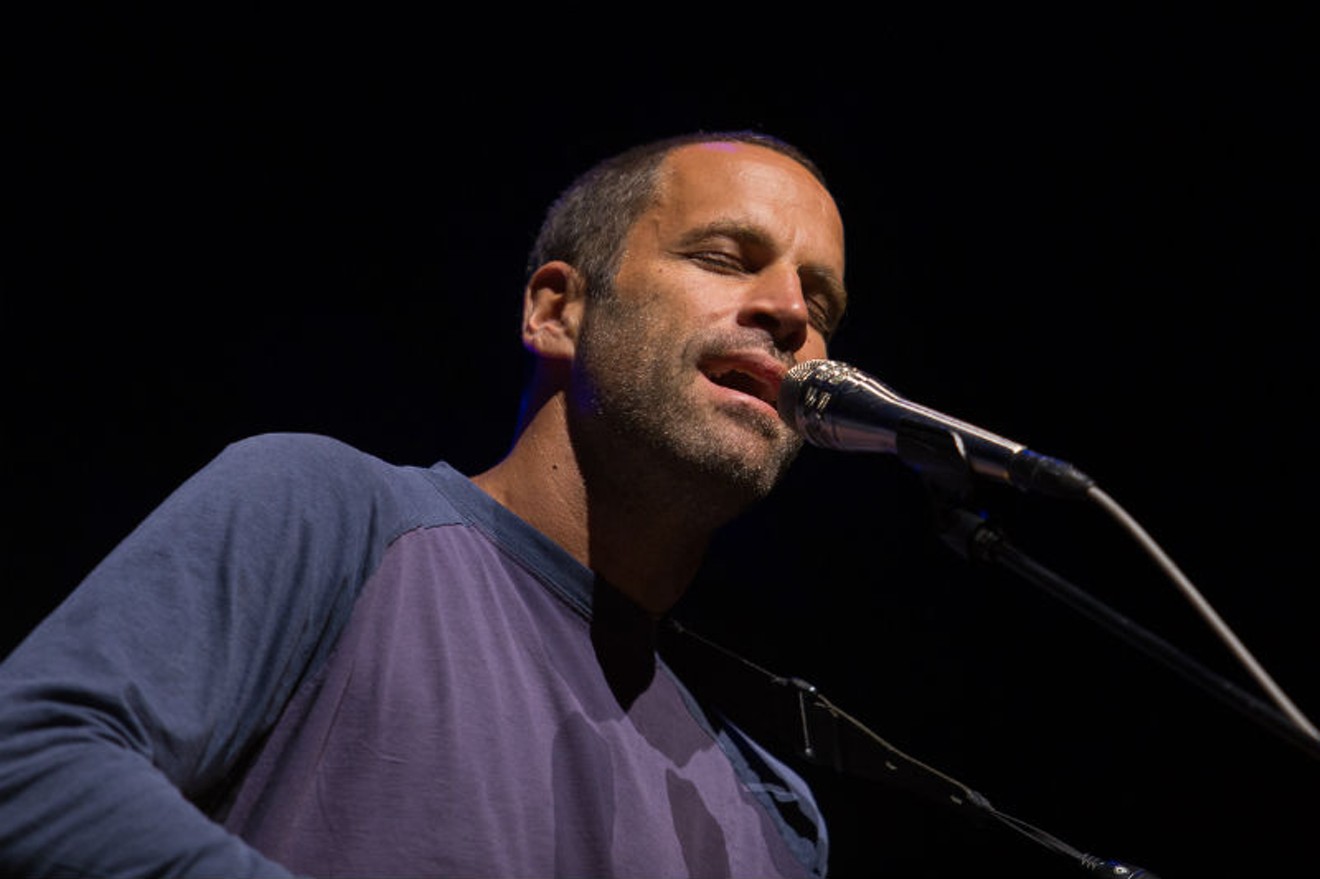 Jack Johnson told the devotees who met him at Cynthia Woods Mitchell Pavilion last night that his wife made the trip to Houston with him. He said she was strolling the Pavilion grounds before the show and witnessed a marriage proposal. There are some dubious places to pop the question. Baseball games surrounded by nacho-eating strangers or at someone else's wedding come to mind. But proposing under a bright moon on a cool, clear spring night in the middle of the woods and with Johnson teed up to serenade you with poetic musings on life and love for two hours? Well, that's just genius.

Mazel tov to the happy couple. They were just one of many, many twosomes on hand for Johnson's return visit to the area, his first since 2010 by our count. Coupled, single, out with friends or family, everyone was treated to a luau of sorts. The stage lighting mimicked ocean waves and tiki lights were strung out over the audience. The rhythmic sway of those fans grooving to nearly 30 songs he delivered must have reminded Johnson of palm trees in the breeze back home in Hawaii.

That's not to say Johnson didn't appreciate being exactly where he was. His set had a definite Texas/Gulf Coast flair about it. In between dreamy renditions of favorites like "Angel" and the show opener, "Do You Remember," Johnson summoned Buddy Holly and sang about the night Willie Nelson smoked him out and taught him an unforgettable (and song-worthy) poker lesson. That tune is dubbed "Willie Got Me Stoned" and is based on a true story, according to Johnson. Being bamboozled by the Red Headed Stranger sounds as awesome in song as it must have been in real life and certainly Johnson harbors no ill-will, as he closes the witty tune with the line "Would I really take a toke if they rolled Willie up and they smoked him? Hell yes, I would,..."  That sent the crowd into a frenzy.

Johnson strummed up some romance for his fans last night.
Photo by Eric Sauseda

You don't sell millions of albums and forge a 20 year career on rugged good looks and easy vibes alone and Johnson showcased the strength of his songwriting in the set. His gift is taking what sounds like soft rock and peppering it with lyrics and themes that make you consider this modern life. For instance, "Gone," which was a fan favorite, speaks in gentle tones to wastefulness and unchecked materialism. It sounds pretty, but there are some notions being delivered that beg for more consideration and action from us all. "Good People," which he's called his most cynical song, was also a crowd pleaser. "Big Sur" - one of the few songs to make the set list from Johnson's latest, All The Light Above It Too - was introduced as a sing-around-the-fire song and even featured some friends, the opening act, Fruition. But its lyrics focus heavily on the natural joys we wake up to daily and there's a hint that we should do all we can to conserve them to keep enjoying them.

The world needs the rage of authority-snubbing punk rock music. We need woke rap artists to call out injustice and create activists. But there’s room too for the tender mercies of Jack Johnson’s songs and time and again he’s proven his laid-back brand can be as powerful on a socially-conscious level as Crass or Kendrick.

Maybe it was the promise of pending nuptials or just the beauty of the evening, but Johnson steered clear of those songs, for the most part, and tended to matters of the heart. From the tender apology of "Tomorrow Morning" to seeing to what matters at "Home" and others, the night was one for lovers. He bumped "Upside Down" up in the set for those who brought kids hooked by the Curious George soundtrack and saved his best-loved heart warmer, "Better Together" for the final song of the night.  By the time he finished that one, we'd all had a chance to contemplate this world and the people with which we share it. There's no denying, it's much better when we're together.

Personal Bias:  “Banana Pancakes,” because my daughter was in middle school when the song debuted. She fell in love with it and kept stealing my copy of In Between Dreams, so I burned her a CD (how long has it been since you read those words?) with just two songs repeated over the disc’s 80 minutes. One was “Stars,” by Bobby McFerrin and Yo-Yo Ma. The other was “Banana Pancakes.” She’d listen to it start to finish and played that CD and its pair of songs that entire school year. I'm sure it's one of the songs that encouraged her to learn guitar.

Last night, the pancakes had a tasty Gulf Coast flavor to them, with keyboardist Zach Gill working the squeezebox to it. Gill was heavily featured on several songs and when Johnson asked the crowd if it minded Gill singing a verse of "Bubble Toes," someone had the audacity to say no.

"Aw, what?  I'll fight you, man!" Johnson said with a grin to the protester. Then Gill broke the song down with a soulful vocal run.

The Crowd: Well-dressed but also ready for casual Friday.  No one was as unassuming as the fella at center stage, who wore flip flops and a wrinkled tee with a hole in the shoulder to the show.

Random Notebook Dump: If you didn't get to the show early, you missed a nice and unexpected treat in Fruition. You may have been kicking yourself when they joined Johnson (who was on the uke!) for a rousing version of "Breakdown."  The Portland, Oregon based band is rootsy and bluesy, with multiple members who can easily lead on vocals. For me, its revelation is Mimi Naja, the lone woman in the band, whose voice cuts clearly through anything else happening onstage. And, she shreds on guitar and rocked the mandolin on "Breakdown" alongside Johnson.

Better together: Jack Johnson and band
Photo by Eric Sauseda

If I Had Eyes

You Can't Control It

Not Fade Away (Buddy Holly cover)

Willie Got Me Stoned

Better Together
KEEP THE HOUSTON PRESS FREE... Since we started the Houston Press, it has been defined as the free, independent voice of Houston, and we'd like to keep it that way. With local media under siege, it's more important than ever for us to rally support behind funding our local journalism. You can help by participating in our "I Support" program, allowing us to keep offering readers access to our incisive coverage of local news, food and culture with no paywalls.
Make a one-time donation today for as little as $1.