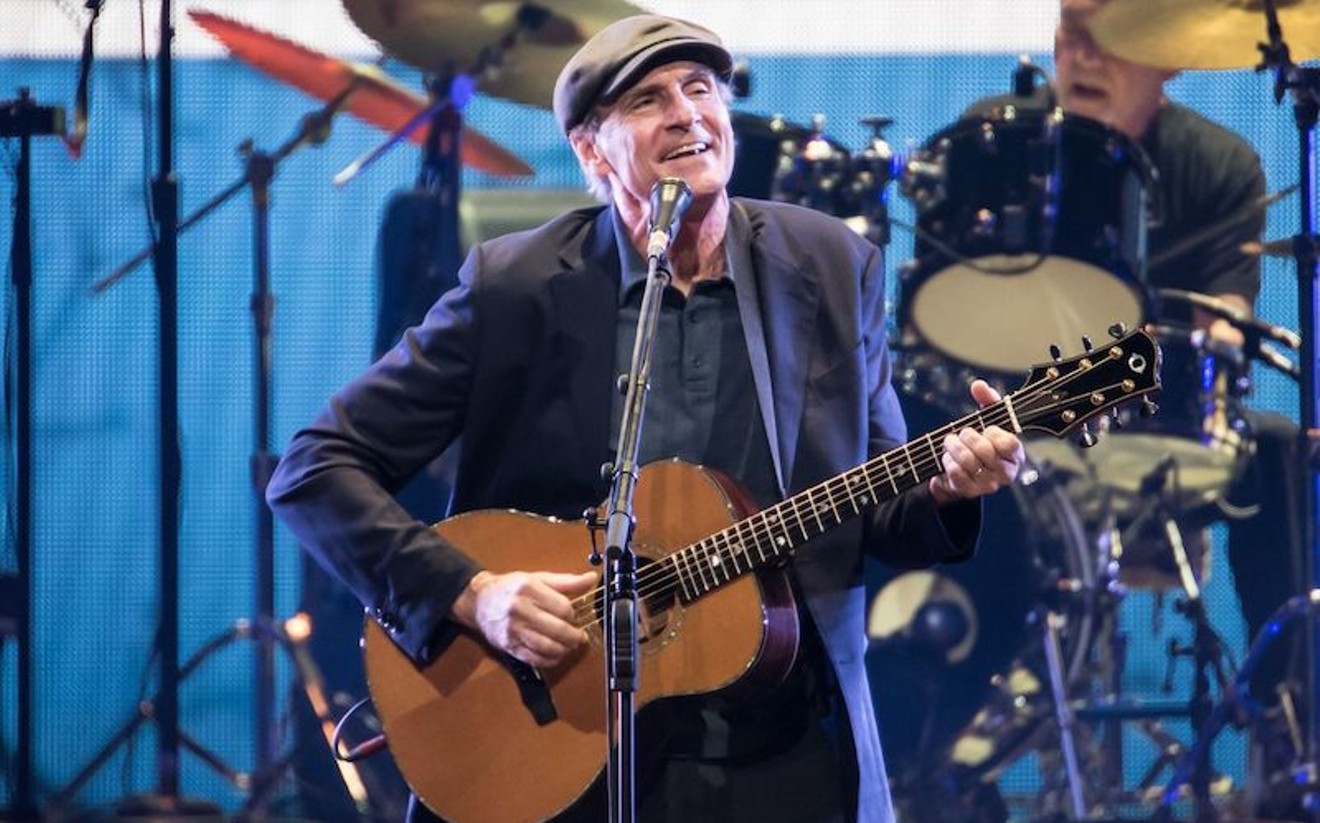 For GenX-ers like myself, now is truly the twilight of the artists who were more or less ubiquitous when we were growing up. It isn't just that half the Beatles are long dead, or that our only recollections of Hendrix, Joplin, and Morrison are via ancient footage, but also how many of our favorite acts of yore are packing it in once and for all.

It's a topic I touched upon in my review of Paul Simon's farewell show, but the phenomenon has snowballed in recent years. Understandably so, given the aging of these Boomer stalwarts. In addition to Simon, recent years have seen/will see the retirements of Joan Baez, Bob Seger, Genesis, Lynyrd Skynyrd Elton John, and KISS(?)

But don't put James Taylor or Jackson Browne in that category. The two, both in their 70s, have released albums recently (Browne's Downhill from Everywhere came out this year, Taylor American Standard in 2020) and show no signs of calling it quits. That point was made — if not emphatically so — last night at the Toyota Center, where each singer-songwriter leaned heavily on the nostalgia factor in front of a [ - ] Sunday night crowd.

Browne has over 50 years of songs to draw upon, and was actually the headliner the last time he came through town. His set list this time was necessarily more abrupt, but even an arena environment can't dilute the urgency of his more powerful message songs, or the melancholy of his (many) songs about failed love.

He took the stage noting this concert had been "a long time comin'," not coincidentally leading into "I'm Alive," from the 1993 album of the same name. The set was a bit abbreviated, as befits the opener, and Browne himself remarked how "spooky" quiet the crowd was.

Blame that on his tendency to be democratic in his song choices (I'd like to hear "Lawyers in Love" performed live, just one time). Or perhaps it's how he's always managed to camouflage his darker themes in pop trappings, themes that take on an added poignancy as he (and his crowd) ages.

Into the cool of the evening strolls the Pretender.
Photo by Jack Gorman
The crowd certainly perked up when Taylor emerged to join Browne for "The Pretender," setting the tone for the rest of the evening. Last night's opener has always struck more of a chord with me personally, while Taylor seemed to come across as more of an elder statesman. Blame Browne's perceived Los Angeles insouciance against what Garry Trudeau once described as "that Martha's Vineyard sound," or how Taylor's music seems lodged squarely in the 1970s.

If it ain't broke, as the saying goes, don't fix it. Taylor and his All-Star Band (including "Blue" Lou Marini on sax, Michito Sanchez and Steve Gadd on percussion/drums, and Taylor's son Henry on backing vocals) eased through a familiar set, punctuated liberally with the expected hits while only showcasing one cut off American Standard (the Johnnie "Scat" Davis cover "As Easy as Rolling Off a Log").

The show was a little front-loaded with anecdotes, as Taylor set a scene for "You Make it Easy" (a smoky bar at 2:30 a.m., when one's judgment is always at its finest), or talking about his Carolina upbringing for — wait for it — "Copperline." Maybe I've missed out, but surely there are stories to tell about the big hits? The back half of his set seemed almost rushed by comparison.

And then there was "Steamroller."

It's been a staple of his live sets since 1969, but traditions aren't always a good thing. Kind of awkward back then, Taylor's grimacing and mugging last night threatened to discombobulate the entire affair. Fortunately, "Fire and Rain," "Carolina in My Mind," and the others were right around the corner.

Taylor's production was surprisingly elaborate, with an engaging video presentation and a giant oak tree that loomed over the stage with multi-colored lanterns that dipped and rose as the music required. It served its purpose, conferring a pastoral, comforting presence on music that's already pretty soothing.

The singer also enjoyed some back and forth with the audience, responding to repeated cries of "I love you" with reminders that he's happily married (third time's a charm) and wisely not pursuing a conversational thread about his Red Sox and the Astros.

But this wasn't a crowd spoiling for a fight. Indeed, judging by the reaction to the closing numbers, and to Browne joining for an encore that included "Take It Easy" and "You've Got A Friend," both artists proved they still have what it takes to bring the house down. Not that there's any way to tell how much of that was a reaction to finally getting to see this show after it was postponed twice due to COVID.

Judging by the attendees, a lingering pandemic was less of a priority than filming large chunks of the show with the flashlight app on full blast.

James Taylor and his Large Band.
Photo by Jack Gorman
Personal Bias: My parents had a copy of Sweet Baby James, as required by the Articles of Boomer Confederation. I still prefer his Simpsons appearance.

The Crowd: Old and bald enough it could've been a James Taylor cosplay convention.

Overheard In The Crowd: "Free Bird!"

JACKSON BROWNE SET LIST
I'm Alive
Rock Me on the Water
Long Way Around
Fountain of Sorrow
Downhill from Everywhere
The Dreamer
Call It A Loan
Doctor, My Eyes
The Pretender
Running On Empty

ENCORE
Shed a Little Light
Take It Easy (Eagles cover)
You've Got a Friend (Carole King cover)
You Can Close Your Eyes
KEEP THE HOUSTON PRESS FREE... Since we started the Houston Press, it has been defined as the free, independent voice of Houston, and we'd like to keep it that way. With local media under siege, it's more important than ever for us to rally support behind funding our local journalism. You can help by participating in our "I Support" program, allowing us to keep offering readers access to our incisive coverage of local news, food and culture with no paywalls.
Make a one-time donation today for as little as $1.