You've probably noticed that "emo" has been experiencing a revival in recent years.

All of which is to say that the elder statesmen of the genre deserve their accolades.

In support of their latest offerings, All The Truth That I Can Tell and Surviving, Dashboard Confessional and Jimmy Eat World brought their "Surviving The Truth" tour to 713 Music Hall on Tuesday.

Calling it a reunion tour wouldn't be accurate, because both acts have remained fairly prolific over the past two decades. Since The Places You Have Come To Fear The Most and Bleed American - both of which were released in 2001 - they have put out six records apiece.

Still, both groups are best known for their greatest hits - "Screaming Infidelities," "The Middle" and a handful of other tracks. While this might be frustrating from a creative standpoint, it lent itself to one hell of a fun show last night. 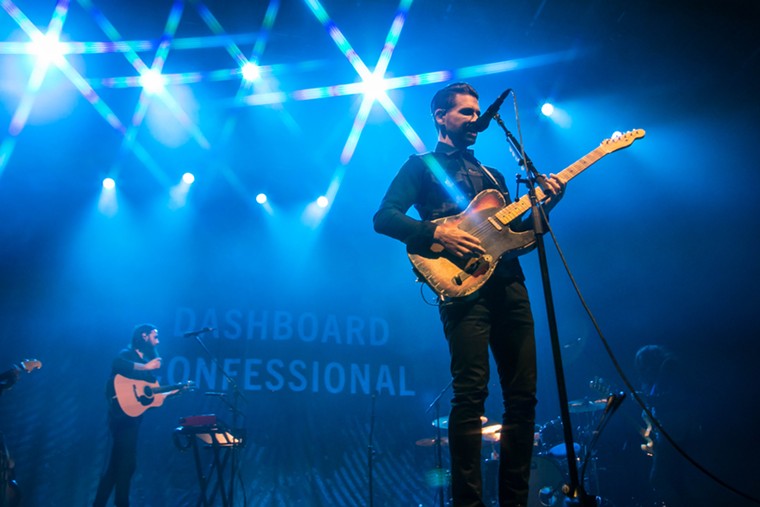 Dashboard Confessional
Photo by Robyn Tuazon
713 Music Hall was packed to the gills, with longtime fans chanting along to just about every song the two iconic outfits performed on the last date of their co-headlining tour.

Some folks from the audience will probably see both acts again when they reunite for "When We Were Young Fest" alongside Paramore, My Chemical Romance, The Used and more. But for those of us who can't make the trek to Las Vegas in October, last night served as a reminder of why we were so engrossed by Dashboard Confessional and Jimmy Eat World in the first place.

When Chris Carrabba performed "Vindicated" and "Hands Down," fans could feel the venue shaking below their feet. And when Jim Adkins sang the opening lines of "Sweetness," the crowd's response — whoa oh-oh-oh-oh — was so loud that it drowned out the band onstage.

The show relied heavily on older material, with both acts eschewing their newer cuts for fan-favorites. Dashboard Confessional's "The Better Of Me" and Jimmy Eat World's "All The Way (Stay)" were the only tracks from their latest releases to make the set list.

Otherwise, the evening was a callback to an earlier time, a time when most of us were still kids in search of music that could help us put words to all the emotions we were experiencing. And for a few hours on Tuesday night, two of the biggest names from the early 2000s successfully made a crowd of 30- and 40-somethings feel collectively young again.

For me, it was heaven.