A 40th anniversary could be a solemn moment in one’s life. Any event designed to look back on decades of triumphs and failures might veer into something too sober to really celebrate. Joe Jackson and his bandmates, who came to Cullen Theater at Wortham Center last night as part of Jackson’s “Four Decade Tour,” ensured the evening never devolved into anything quite as serious as, well, Jackson’s own tune titled “40 Years Ago.”

That song, from 1986’s Big World album, did not crack the set list, but its melody and the line, “But it was 40 years ago,” must have been running through the minds of true Jackson fans in attendance. Instead of songs about mistrust between the United States and its allies (when was this song written again??), Jackson and company covered 40 years in 20 songs, leaping through time for a couple of hours.

“Forty years, if you can believe that,” Jackson said on his first address to the audience, following show openers “Alchemy” and “One More Time,” which, he noted, are the last track from the new album and the first track from the first album.

“Alchemy is kind of an underlying theme of everything we do, trying to turn crap into gold,” Jackson said.

Bassist Graham Maby (right) has been with Jackson since 1979's Look Sharp!
Photo by Violeta Alvarez

The joke set the tone for an evening of playful but skilled and acutely precise playing by Jackson and his bandmates. Bassist Graham Maby, who’s been there right from Jackson’s acclaimed debut record Look Sharp! got a deserved ovation on the first notes he plucked. Guitarist Teddy Kumpel and drummer Doug Yowell rounded out the quartet, the same outfit Jackson toured with when he played UH’s Cullen Performance Hall in 2015, his last Houston show.

The night wasn’t a nostalgic look back at a stalled career, thankfully, since Jackson continues to create new and interesting music. The evening was part showcase for songs from his latest record, Fool, which released in January. “Fabulously Absolute,” from the album, was high in the set list and sounded like punk-era Jackson. “Strange Land,” he said, was about alienation and disorientation, themes that recalled “Chinatown” from his smash record Night and Day.

Over the years, Jackson’s re-arranged some of his biggest hits just to keep them fresh and compelling to play. You might arrive for a show and hear “Is She Really Going Out With Him?” performed acapella or only on percussive instruments (he delivered it straight last night). So, he told the gathered that playing his biggest hit, “Steppin’ Out,” “exactly as it was recorded” was no simple task. He had a stage hand bring out the original drum machine he used to backbeat the MTV hit song and the fellow marched it onstage cautiously, carrying the instrument (a rare Korg Rhythm 55) with gloved hands. The pomp and circumstance of it all fell away as Jackson and the group launched into Jackson’s highest charting U.S. single.

The Night and Day tracks were high points of the night. Hearing “Another World,” the album opener, was like sitting in 1950s Birdland, where Jackson’s jazz vibe would have been dug by ‘Trane, Monk, Lester Young and any other musician who held court there. During “Real Men,” the missus (seeing her third Jackson show in 33 years) leaned over and remarked how Jackson's voice hasn't faltered over the decades.

The band didn’t forget to have a good time. After all, it was a 40th year celebration. When Jackson sang “If you wanna know how to play guitar,” on “Sunday Papers,” Kumpel did something silly that made Jackson laugh so hard he had to stop playing to regain composure. He’s stoic about music but he’s not above playing the fool. The new album’s title track gave him a chance to share something he’s learned over these four decades with his fans.

“Fool” starts with a carnival beat because the fool is the king of the carnival and someone Jackson said is “kind of my favorite super hero. It’s really about the importance of keeping a sense of humor. Because without that, especially as you get older, you’re fucked,” he said to an all-too-knowing crowd’s applause.

Personal Bias: A few years ago when I followed the footsteps of some of my idols, namely Houston music writers Bob Claypool and Marty Racine, and first reviewed a local Joe Jackson show, I mentioned in this very segment how I'd have loved to have heard just one track from Beat Crazy. That one's probably my favorite Jackson album because it's start-to-end packed with hectic music and urgent messages (messages that, sadly, are still being ignored nearly 40 years on - listen to the record's closer "Fit" and tell me I'm wrong).

But, also because it's the first Jackson album I heard, thanks to an old friend named John. In 1981, I was a transfer into the all-boys' Catholic school and mostly out of my element. By junior year, friendships there had already been cemented over freshman and sophomore seasons, so it was tough being the new guy. John didn't care that I'd just arrived, he learned that I liked music, so we had something to talk about. As it often is, music was a gateway for a friendship. He got me hip to Pretenders and Kim Wilde and, most notably, Joe Jackson. The first time I saw Jackson was at the long-gone Houston Music Hall and John was there with me. Pretty sure that was for 1984's Body and Soul tour. A lot of time has passed since then and we drifted off toward what came next, but I am fairly certain John went onto a pretty successful professional career and made lots of other, closer friends since. Whenever I hear tracks from Beat Crazy, I remember how those songs helped me feel a little more stable, confident even, in an uncertain time and place. So, thanks John. And you too, Joe. P.s. - nope, I didn't hear a track from Beat Crazy last night. Sigh. 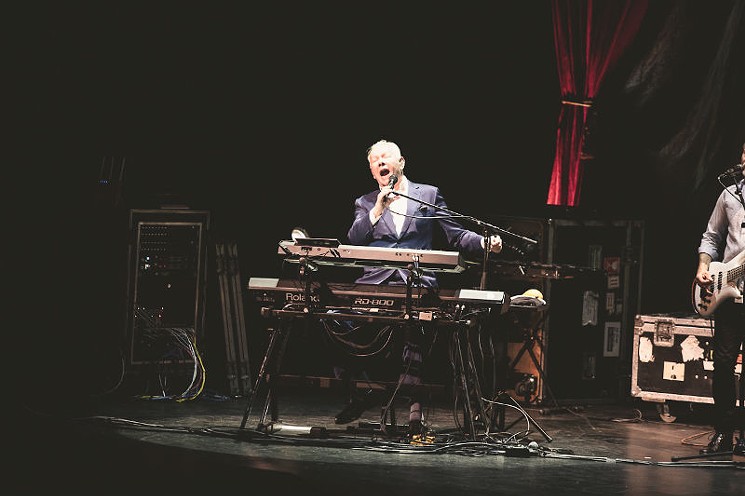 The Crowd: Herky-jerked in their very plush seats during ragers like “Got the Time” and “Sunday Papers” but otherwise remained relaxed and settled in for listening rather than dancing. God bless you, lone woman in a white blazer in the first few rows, for getting up and thrashing during “I’m the Man.” You danced like no one was watching, but we all saw you and, quite honestly, you killed!

Overheard in the Crowd: “They made the rules so we can break them!” – woman with plastic champagne flute who never lost her punk spirit of rebellion and was ready to ignite its fire right there at the Wortham Center, if necessary.

“Joe Jackson sings a song called “How Long Must I Wait for You,” said a man to woman impatiently awaiting the start of show and she deadpanned, “He needs to play that song first.”

Random Notebook Dump: I’ve somehow missed shows at Cullen Theater at Wortham Center until last night and it was the perfect room for hosting Jackson in his 40th year of performing. On June 4, 1984, nearly 35 years to the day from last night’s show, Jackson played the Houston Music Hall. He chastised security for making a woman (the same blazer-clad lady as last night?) return to her seat from dancing in the aisles. In July 1986, he played Southern Star Amphitheater, possibly the worst Houston venue he could have booked into since restless AstroWorld kids meandered over from Greezed Lightinin’ to yell “Wooo!” and “Alllllright!!” which irked the music-forward musician. The Cullen set the right framework for a night of music made by earnest musicians for earnest music fans.

Is She Really Going Out With Him?

Alchemy (reprise)
KEEP THE HOUSTON PRESS FREE... Since we started the Houston Press, it has been defined as the free, independent voice of Houston, and we'd like to keep it that way. With local media under siege, it's more important than ever for us to rally support behind funding our local journalism. You can help by participating in our "I Support" program, allowing us to keep offering readers access to our incisive coverage of local news, food and culture with no paywalls.
Make a one-time donation today for as little as $1.