KISS Shouts It Out Loud One Last Time At Toyota Center

At this point, it’s probably easier to count musical acts that haven’t embarked on farewell tours than those that have. The Rolling Stones and Bruce Springsteen, for example, seem to trust the gods of rock and roll immortality to keep them going, throat surgery and heart valve replacements notwithstanding.

Then you’ve got pretty much everybody else. The Who (coming to town later this month) have been on the verge of disbanding since 1982, to hear Pete Townshend tell it. Hell, Mötley Crüe had something like three farewell tours, which were surely the result of heartfelt soul searching and not the inevitable outcome of a profit-maximizing long con.

Which brings us to KISS, who’ve reunited almost a dozen times already since their so-called “Farewell Tour” in 2000 (later retconned to mean the band’s final performances with the "original lineup"). The third leg of their “End of the Road” campaign brought them to Toyota Center last night, and if this is really the last time the Knights in Satan’s Service visit Houston, then at least we saw them go out on their own terms.

If not Peter Criss and Ace Frehley's. 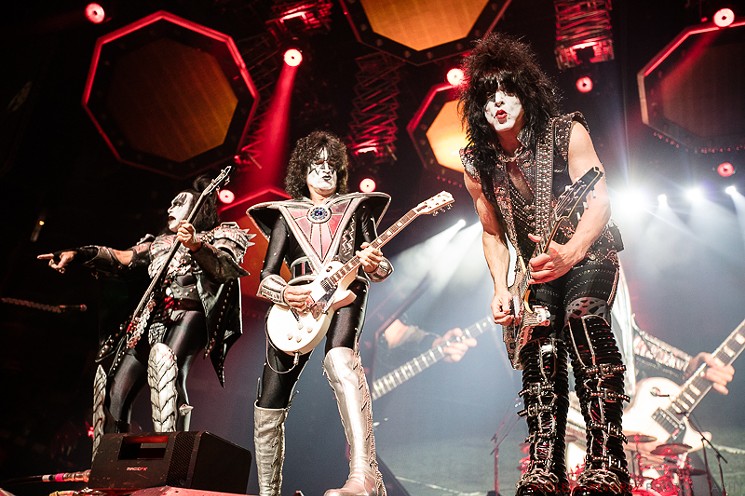 The band stuck to its tried and proven set list.
Photo by Violeta Alvarez
Musically, last night's set list varied little from most of the last decade’s shows. If you were frozen back in 1987 like Ash in Evil Dead 2 and woke up to hear this concert, the only songs you wouldn’t recognize would be “Say Yeah,” from 2009’s Sonic Boom, and “Psycho Circus” (that’s if you were even paying attention after you found out who was President). And just like last time, they played four songs each off Destroyer and the band’s 1974 debut album.

And I don't say that to bury KISS, but to (sort of) praise them, "Detroit Rock City" still features one of their nastier riffs, and "Deuce" is always sleazy fun (and featured cool footage from past shows). Though some of the mainstays make less sense: "Say Yeah?" Okay. And all I can tell about "War Machine" from the video accompaniment is that armies of the future will battle dragons created by University of Phoenix graphics design students.

The venerable "100,000 Years" lets "new" drummer Eric Singer strut his stuff, and gives Paul and Gene a breather, while guitarist Tommy Thayer got to show his chops during "Cold Gin." I'm not sure why "Psycho Circus" is still there, though knowing Gene there's some kind of contractual snafu with Todd McFarlane.

Likewise, the shtick – Gene spitting fire and blood, Paul zip-lining above the crowd, the makeup, the boots – makes for familiar comfort. In an era of fear and uncertainty, there’s something reassuring about experiencing something that's barely changed in 40 years. It’s also to be expected that a couple old dudes (Simmons is 70, Stanley 67) wouldn’t want to revisit the mistakes of the past (taking off the makeup, hiring Mark St. John, recording Music from “The Elder”).

Not that the audience cared. It was hard to gauge how many believed this was really the band's last hurrah, but it might have explained the number of children in attendance. Now that I think about it, KISS is pretty much the ideal metal show for kids. You've got pyro, dudes in hilarious costumes, and mild horror (Gene spitting blood is the musical equivalent of Grandpa playing with his dentures at the dinner table). Take the tykes for a potty break during "Lick It Up" and you're golden.

In the end, as with so many of their other shows, the band was unsentimental and workmanlike, and there were few references to the fact this was to be their (allegedly) final show in Houston. Aside from a few references to playing at the Music Hall and the Summit, there weren't any pauses to soak up the adulation. Maybe it hasn't truly sunk in for them, either. Or maybe it's all BS.

Personal Bias: Dressed as Ace Frehley for 3rd grade Halloween. I think that's all that needs to be said.

The Crowd: The "creatures of the night" sure do favor those vented Cabela's shirts these days.

Overheard In The Crowd: "Do you need to sit down, dude?"

ENCORE
Beth
Crazy Crazy Nights
Rock and Roll All Nite
KEEP THE HOUSTON PRESS FREE... Since we started the Houston Press, it has been defined as the free, independent voice of Houston, and we'd like to keep it that way. With local media under siege, it's more important than ever for us to rally support behind funding our local journalism. You can help by participating in our "I Support" program, allowing us to keep offering readers access to our incisive coverage of local news, food and culture with no paywalls.
Make a one-time donation today for as little as $1.