Last Night: Lamb of God and Megadeth On Fire in The Woodlands

Randy Blythe of Lamb of God. Photo by Jennifer Lake
As the sun set on several hours of metal Sunday, co-headliner Lamb of God took the stage at Cynthia Woods Mitchell Pavilion, the first notes of "Memento Mori" trickling out. A silhouette of front man Randy Blythe shone through the curtain and as the acapella start of the song ended, an explosion was set off, the curtain fell to the ground, revealing the band in all its metal glory.

Aptly named, the Metal Tour of the Year featuring legendary band Megadeth and Lamb of God, gave devoted metal heads (about a third of whom were wearing masks, which were more in evidence in the concession stand and merch lines) a hefty dose of old and new school hardcore rock.

“Houston it’s hot out here, are you ready to go on a walk with me?” Blythe called out as flames shot out from all around the stage. “We came here to Texas to one thing, and one thing only, fuck this shit up!” The energy in the pavilion doubled as Blythe set up the third song, "Walk with Me in Hell."

Blythe demanded a circle pit then went into "Now You've Got Something to Die For" He took time to encourage the crowd to follow their own path in the world, holding high his signature nonalcoholic beer. The singer has had his past struggles with alcohol abuse and now promotes a cleaner lifestyle. Those in attendance could purchase the beer at the concession stands, along with a special edition Megadeth beer. 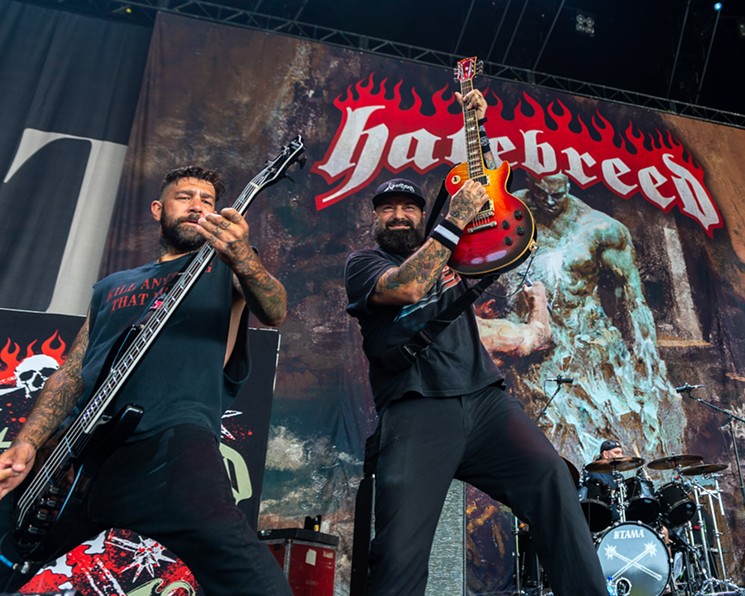 Chris Beattie (Bass) and Frank Novinec (Guitar) of Hatebreed.
Photo by Jennifer Lake,
Earlier in the night, Hatebreed opened with an assault of chunky, heavy, hardcore riffs, catering to old school metalheads. With the guitarist repping a ZZ-Top shirt, and Jamy Jasta, one of the undisputed reigning voices of metal, host of 00’s era MTV’s Headbangers Ball, fronting the act, they got the crowd going early.

“This isn’t officially a metal show unless I see an old school circle pit.” Gesturing to the crowd, acknowledging the absence of lawn seating. “I don’t care if there's 10 of you, fuck that shit up!” said Jasta. The small portion of the crowd that was in the pit dutifully formed a circle and typical metal mayhem ensured.

Next up was Trivium, a band with a different take on metal.  Front-man Matt Heafy has become a well-known figure in the technological community with his success in Twitch streaming during the pandemic to stay in touch with fans.  Now on tour he’s been using the platform to give his followers a behind-the-scenes look at tour life.

By the time Lamb of God hit the stage, it was a crowd singalong as the band played all of their most popular songs as the audience belted out the lyrics. The band exited the stage after only 40 minutes, but quickly returned to finish their hour, closing out their set with their 2006 hit, 'Redneck,' coinciding with the 15th anniversary of their album Sacrament.

“I was scared this was never going to happen again, take a moment to look around. Look at you all! Put your hands together for yourselves god damnit!” Blythe called out. 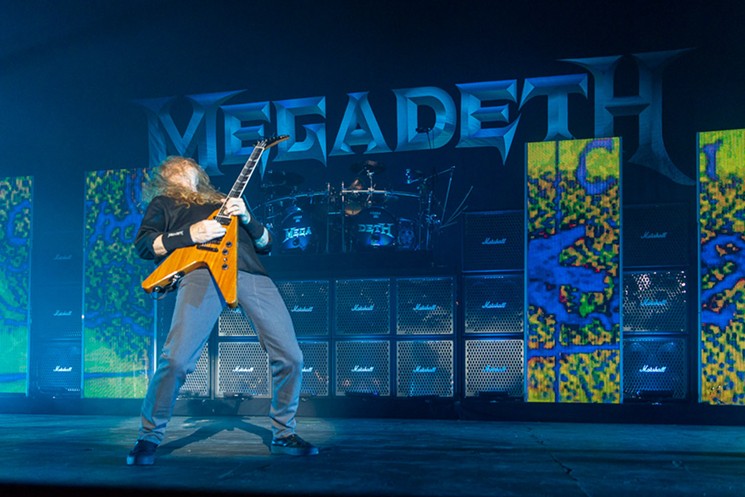 Megadeth frontman Dave Mustaine in front of the wall of amps.
Photo by Jennifer Lake,
The crowd thickened as co-headliner Megadeth's set grew closer. Megadeth is considered one of the Big Four in metal, Metallica, Slayer, Megadeth, and Anthrax. The crowd was electric with anticipation.

Starting off strong with "Hangar 18," the five minute-plus song consisting of mostly back-to-back guitar solos, was the perfect start to the last set of the night. Backed by a wall of guitar amplifiers, the old school band took over, running up a collection of classic metal hits including, "Sweating Bullets," "Holy Wars" and "Peace Sells..."

As the night came to an end, Dave Mustaine thanked all the bands that performed earlier in the night, “but most of all I want to thank all of you!” The band joined hands in the air and took a bow before waving goodbye. 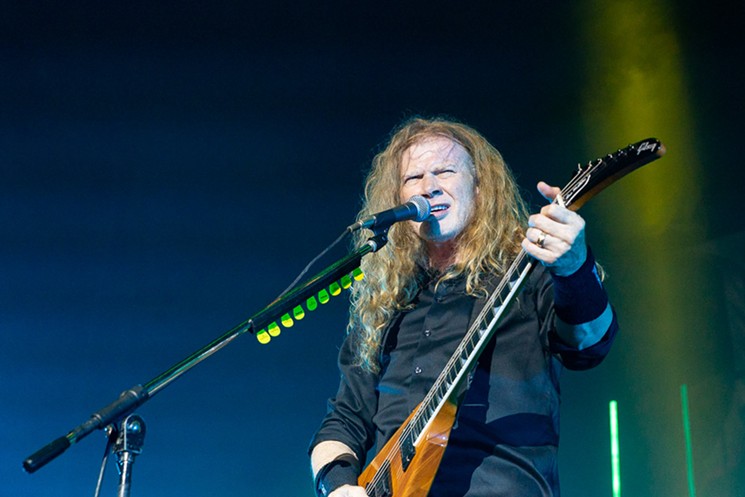 Dave Mustaine of Megadeth.
Photo by Jennifer Lake,
KEEP THE HOUSTON PRESS FREE... Since we started the Houston Press, it has been defined as the free, independent voice of Houston, and we'd like to keep it that way. With local media under siege, it's more important than ever for us to rally support behind funding our local journalism. You can help by participating in our "I Support" program, allowing us to keep offering readers access to our incisive coverage of local news, food and culture with no paywalls.
Make a one-time donation today for as little as $1.