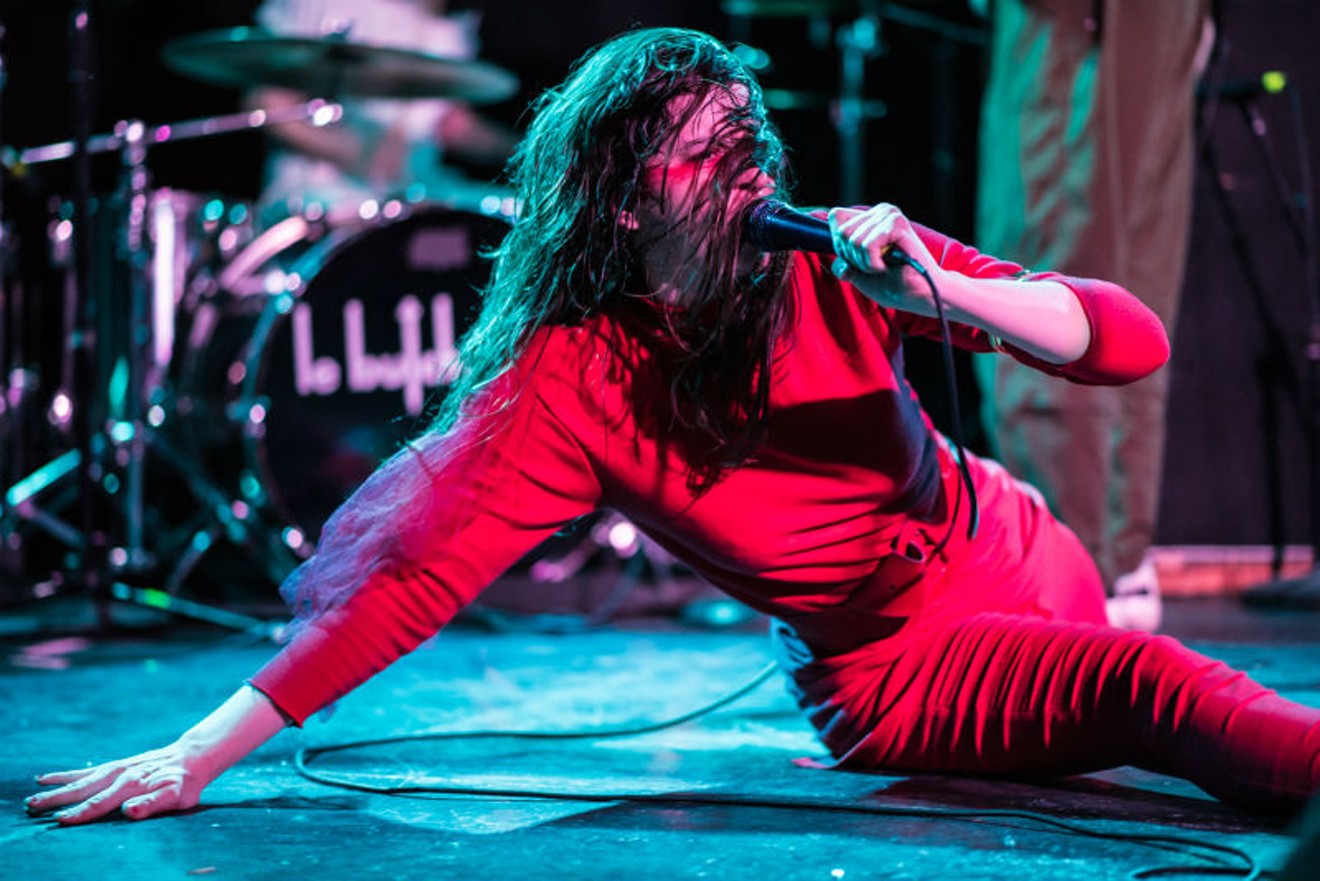 It was an unfortunate (and quickly remedied) moment in Le Butcherettes’ show at Warehouse Live last night when the microphone died during the band’s first number, “Burn the Scab.” Vocalist Teri Gender Bender appeared to be shouting at the audience from miles away, though anyone at the show was merely feet from her and the stage in the venue’s intimate Studio space.

It was purely coincidental that the fierce female singer was momentarily silenced on International Women’s Day 2019 before an audience that was predominantly male. Like many of her peers being celebrated yesterday, she was unfazed and just kept shouting her message until it was heard.

Up to now, the message in Le Butcherettes’ brand of garage punk has arguably been more artistic than political or social, but a new album, bi/MENTAL, has changed that. The record released just a month ago and last night’s show for a smallish Houston audience was an introduction of sorts to the new tracks. As Teri Gender Bender (née Teresa Suárez Cosío) told us in an interview ahead of the performance, the album weaves a heavy tapestry covering mental illness, addiction and family. It chronicles her emotions during her mother’s mental breakdown, which was aggravated by alcoholism.

Songs like “spider/WAVES,” which followed the opening tune, feature lyrics like “Injuries are slashed deep open, Messiahs hold them still,” and indicate the wounds are still fresh from the fallout in this artist’s personal life. Her frenetic delivery of the song wasn’t just part of the act. You could sense something curative about it. Dressed in red, with a matching headdress and a thin strip of tribal face paint, she was like a curandera, using the music to rid herself of the toxic spirits around her.

The set was built primarily from the new album’s songs, though she did ask the band (Alejandra Robles Luna, Rikardo Rodriguez-Lopez and Marfred Rodriguez-Lopez) to reach back to 2010’s Sin Sin Sin for a crowd favorite, “The Leibniz Language.” The look she shot drummer Robles Luna after playing the opening notes to the song on keys suggested this one wasn’t on the set list. They launched into it and the crowd responded, chanting the line “Bruno was a classic!” with verve. By then, the gathered had already witnessed Gender Bender climb atop the venue’s bar and snake into the audience more than once. Though the room was only about two-thirds full, the crowd was game when it was called into action.

When the evils are driven from the possessed in those horror films, there’s always a shell of a human left behind, someone whose body appears exhausted from being ravaged by demons. In Teri Gender Bender’s case, the opposite happens. When she reached the halfway point of the 12-song set, she cranked up the volume and her energy for “La Uva,” a track from 2015’s A Raw Youth. She rattled with tremors and went full Linda Blair on us, eyeballs rolling back into her head. This wasn’t Pazuzu invading, though, it was the artist exorcising her devils. The balance of the set was her continued journey to be demon-free. The power of music compels you!

The Openers: We missed a brief set from openers, Houston’s own The Raccoon Gang (look for their first single, set to drop March 23) but arrived in time for Stars At Night. Teri Gender Bender touted the quartet ahead of the show and they didn’t disappoint, offering guitar-laden body movers and being fronted by dynamo vocalist Janelle Obert. The group follows in the tradition of kickass Los Angeles-based, all-women punk acts like L7 and Go Betty Go and their International Women’s Day set was full of femme-powerment, from a gritty version of Cyndi Lauper’s “Girls Just Want to Have Fun” to a song which featured the repeated chorus, “I got the bomb ass pussy.” The band’s unabashed glee at playing the song for a dude-heavy room wasn’t just fun (and funny), it was also a link back to female punk pioneers like Debbie Harry, Siouxsie Sioux and Kathleen Hanna. They led the way so bands like Stars At Night could follow and, in turn, shine a path for even newer and bolder women acts to follow.

Personal Bias: I’ve seen Le Butcherettes a couple of times now and my two lasting impressions are: 1) this band deserves a bigger following. After all, it is churning out gutsy, provocative music. It features a compelling front person. And, it’s aligned with some heavy hitters in the punk and rock genres, acts like At the Drive-In, Iggy Pop and Jello Biafra. I was a little disappointed more Houston music fans weren’t at Warehouse Live on a Friday night for new music from this thrilling band; and, 2) I still haven’t heard “Bang!”, my favorite Le B song, live. Maybe next time.

The Crowd: As mentioned a couple of times now, the room was majority male for these women-fronted acts. We didn’t poll the men in the room to ask why they purchased tickets, but let’s not kid ourselves, at least a handful where there just to gaze upon Le Butcherettes’ Teri Gender Bender, who is a classic beauty by most standards. When Stars At Night’s Janelle Obert said, “Houston, I have a crush on you,” you could almost hear the fellas sigh. But, whatever the reason the audience was drawn to the show, (and, I'll suggest it's primarily the punk rock punch of the music), the result was the same for the bands. So long as the microphones were working, they delivered a loud and clear message about women empowered by music and empowering others with it.

Random Notebook Dump: There were tickets to next weekend’s Laura Jane Grace show at Warehouse Live available for the taking last night. The freebies were situated around The Studio’s bar, so we nabbed a couple. Good for us, but let’s hope this isn’t a sign that another badass woman is going to play to another smallish crowd on a second consecutive weekend in Houston.
KEEP THE HOUSTON PRESS FREE... Since we started the Houston Press, it has been defined as the free, independent voice of Houston, and we'd like to keep it that way. With local media under siege, it's more important than ever for us to rally support behind funding our local journalism. You can help by participating in our "I Support" program, allowing us to keep offering readers access to our incisive coverage of local news, food and culture with no paywalls.
Make a one-time donation today for as little as $1.