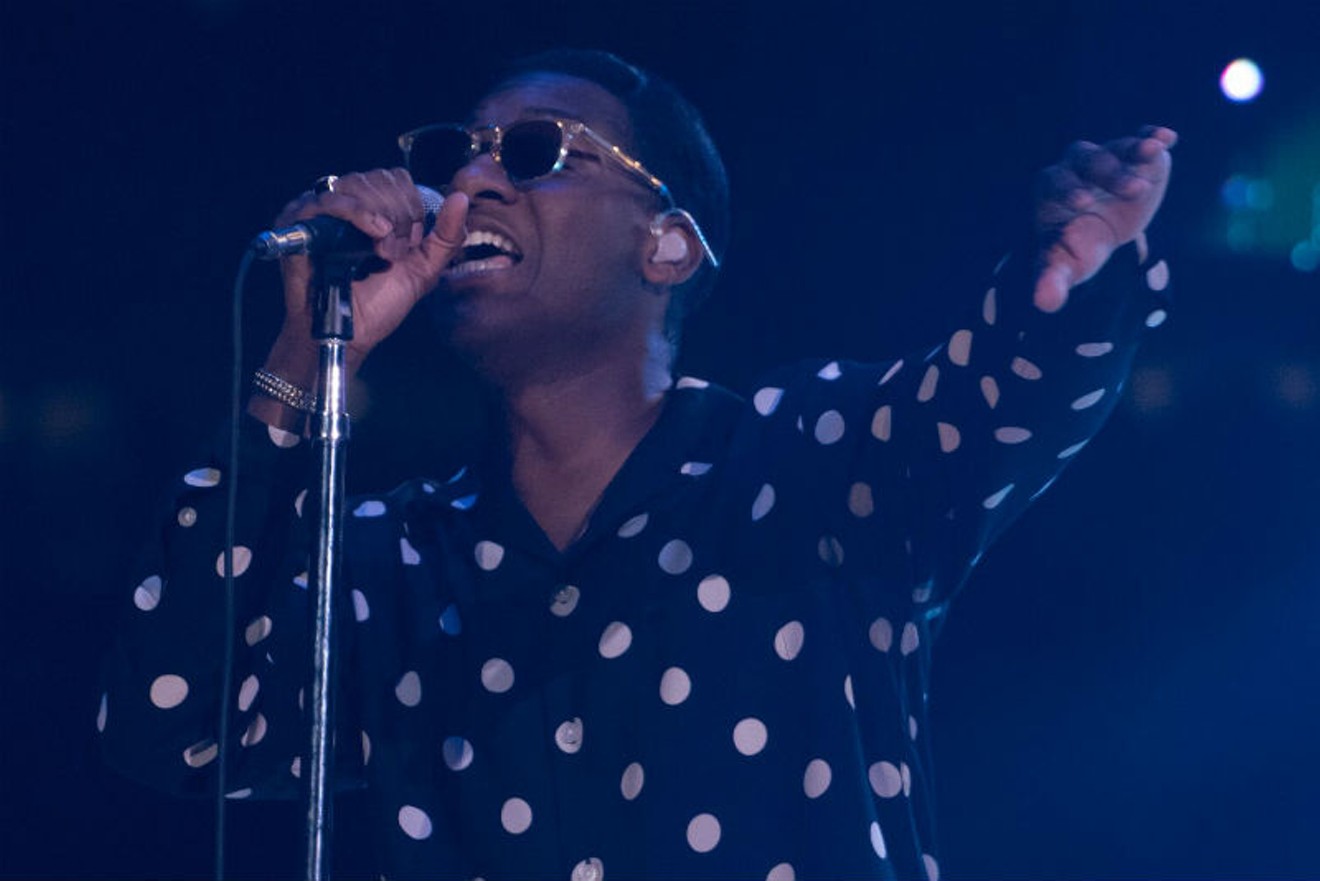 Leon Bridges on stage at RodeoHouston was solid. Photo courtesy of the Houston Livestock Show and Rodeo

The question was never whether Leon Bridges would perform well, but if that’s one you need an answer to, then just know he was solid. He and his band delivered an hour’s worth of throwback soul music at RodeoHouston last night that thrilled his established fans and earned him some new ones.

The only question of note going into the show was whether anyone would be on hand to hear the Fort Worth crooner’s smooth-as-silk vocals. Technically, the answer is yes, some listeners were there grooving. Those who showed were even treated to Bridges tag-teaming with Bun B for a classic UGK song. Having Bun onstage with you is akin to getting an endorsement from the mayor of Houston music.

But, the honest and telling answer is that of the paid attendance of 51,000-plus – already a low figure for any night of RodeoHouston – many fewer than that bothered to fill their paid seats. There’s no point in guessing how many actual listeners were on hand, but even the most populous sections of the stadium were really just a swath of show-goers here, another swath there and barren seats between them.

Bridges came out at 9 o’clock wearing a snazzy casual Friday look that included a pair of dark sunshades. Someone joked he may have been wearing them so he didn’t have to see all the vacant seats in the building. The low attendance was expected as his booking on the traditional Black Heritage Day drew the ire of potential ticket buyers. They took to social media in droves with their complaints, which see-sawed between two arguments. Some felt his music – which has been compared to the likes of Otis Redding and Sam Cooke – is too hipster or too white for Black Heritage Day. Others claimed they’d just never heard of him, despite a Saturday Night Live appearance, ubiquitous play of his breakthrough hit, “Coming Home,” and a Grammy nomination.

That’s who Bridges played for last night, the fans he’s yet to meet. His only commentary on the entire kerfuffle was directed to that group.

Bridges went uptempo (and perhaps a little tongue-in-cheek?) with his opener, “Smooth Sailin.’” That set an easy, jaunty tone and by the third song he was at home enough to lose the shades. The set was book-ended by “Mississippi Kisses,” which also has a groovy, fun vibe and brought the hour full circle.

Midway through the set Bridges launched into “Coming Home.” Appropriately, the stage lighting went solid gold for the song, which had most of the press box listeners singing, or at least humming, along. He followed it with “Better Man,” another of his best-known songs. The audience favorite seemed to be “River,” which one person within earshot called “the Sam Cooke song.”

“Is this a Sam Cooke song?” their companion asked.

“No, they just say it sounds like Sam Cooke.”

About 40 minutes in, Bridges asked, “H-town, you still with me?” and if anyone wasn’t, then they missed a cool moment when Bun B was called up. They did UGK’s “One Day,” with Bun’s verbal acuity complemented perfectly by Bridges butter-like vocals on the well-known refrain. At the end of the song, there was a shared hug between them that reminded us these are Texas artists. If they’re from here, boast talent that sets them apart and create uplifting music it’s difficult to understand why anyone wouldn’t support that, especially fellow Texans.

Personal Bias: I’d pay good money to see Leon Bridges sing that way at a packed festival, a mostly-empty sports arena or backwoods shack. I hope he keeps growing his brand so his next RodeoHouston outing comes along with a fight to find tickets. It could happen. We chatted with a couple after the show – middle-aged, African-American, cowboy hat-wearing Texans by way of Chicago – who told us they’d heard of Bridges but weren’t too familiar with his work. They loved the set and said they’d seen Bruno Mars at the Rodeo and reminded us that there was a time when even the mighty Bruno was largely unknown to listeners. They felt Bridges’ talent is considerable enough to send him along the same sort of path.

The Crowd: Small, enthusiastic and supportive.

Overheard in the Crowd: NRG elevator operator: "Are y'all excited about tonight's performer?"

General unanimous yes from 8 or 10 riders.

"I heard he was a one-hit wonder," says one rider.

Mutton Bustin’ Update, Day 4: Cory Garcia provided updates on one of the rodeo’s favorite events in his reviews of Garth Brooks and Blake Shelton, so I fought the carnival crowds to get to my seat in time for the action. I’m glad I did, as its outcome provided a few moments of appreciated levity. Following her victorious ride (if one can call clinging to a sheep for dear life a ride), the winner gave the crowd the secret to her success (“Because I was holding on really tight”) and her preparation routine (“I practiced on my dad”). When she was asked what she’d like to do when she grows up, she said she wanted to be a doctor. When asked which kind of doctor she wanted to be, she said, “A nurse.”

Random Notebook Dump: Y’all can keep frying pickles, Twinkies, Mars bars and whatever else you wanna grab from the grocery shelf, there’s still nothing better to eat at RodeoHouston than an airy, sugar-dusted, hot- outta-the-grease funnel cake.