Lizzo Loves You And You Should Love You, Too 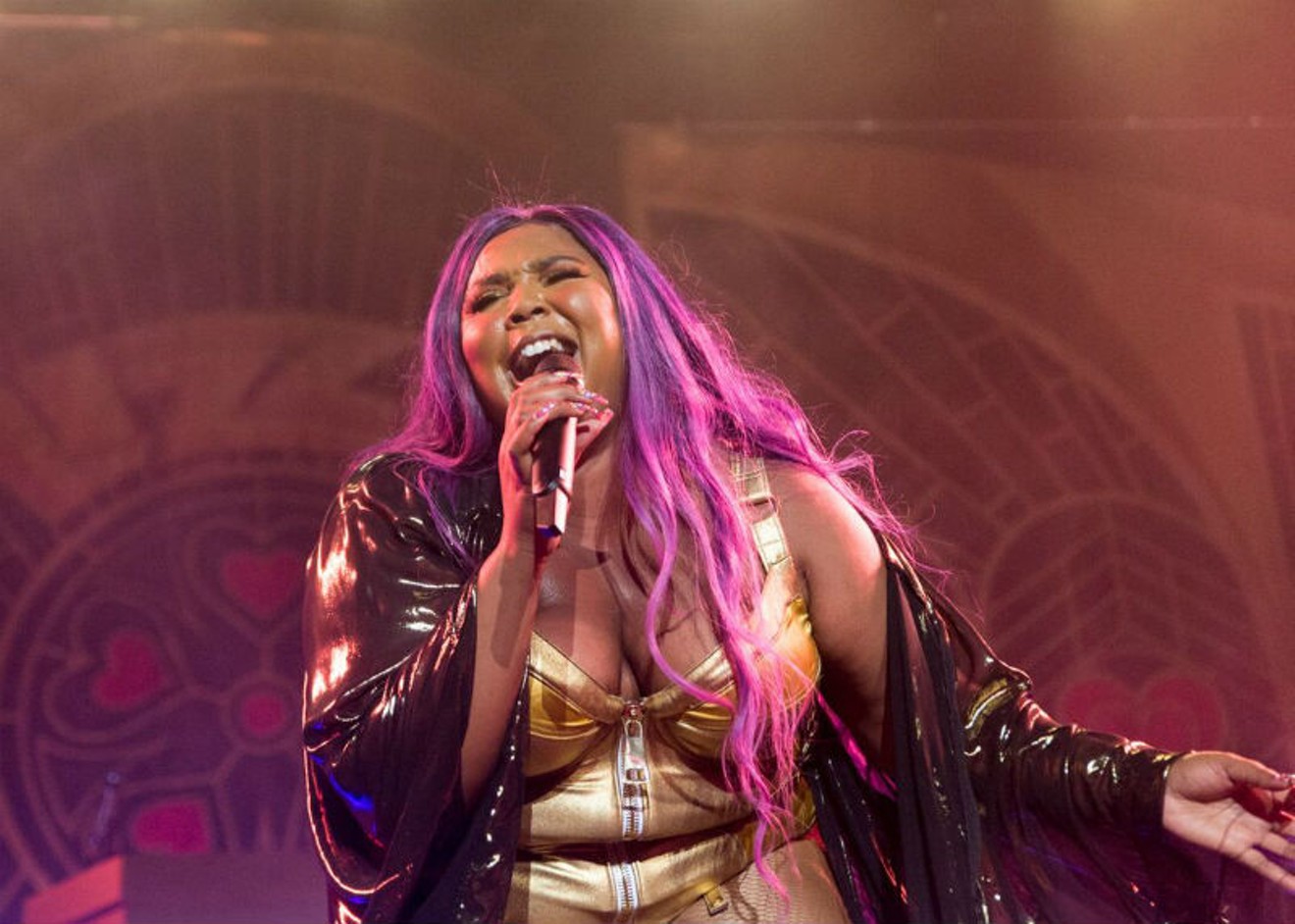 “We call it Cuz I Love You Too because I know you love me,” she coyly told the sold-out crowd at Revention Music Center.

That acknowledgment came early in her 90-minute set, after an ear-splitting ovation from the fans who packed Revention’s floor and stood shoulder to shoulder from the foot of the stage to the back wall and long-ways across the hall (it was a bad night for claustrophobes, y’all). The full balcony was on its feet from the beginning and stayed that way for the entirety of the show, even though they’d purchased balcony seating so they could, you know, sit. The cheering lasted nearly a full minute and the woman of the moment soaked it in, occasionally batting her eyes or feigning disbelief at the adoration. Except for maybe Azealia Banks, in 2019 practically everyone loves Lizzo. And by everyone we especially mean women, particularly white women in the 20 to 40 age range, if last night’s show was a microcosm of her global audience. 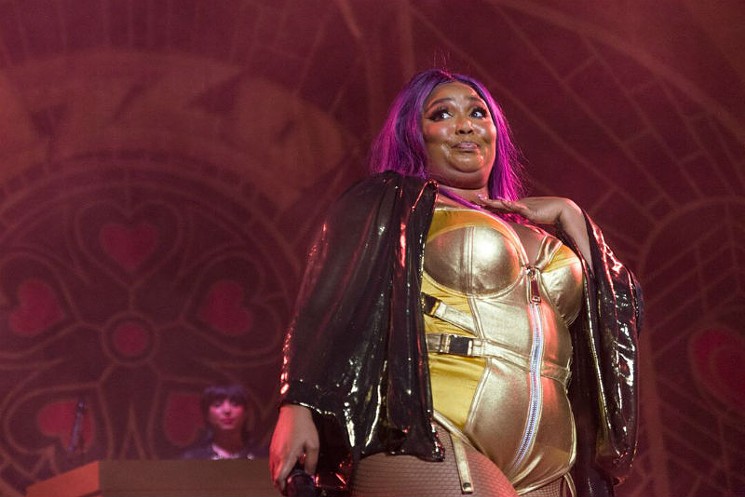 That was really the last moment Lizzo spoke about how much her fans love her. The rest of the night was about how much they ought to love themselves, a message at the center of Cuz I Love You and preached all night long. Lizzo came prepared to deliver a personal sermon. She opened with tone-setters “Heaven Help Me” and “Worship.” She first appeared before a backdrop designed to resemble stained glass, wearing what looked like a clergy robe and standing in a pulpit (which would transform to the booth for DJ Sophia Eris). The pulpit boasted Lizzo’s name in lights, so anyone unfamiliar with her proselytizing may have mistaken just what was being praised. The throngs who packed the room and knew every word to “Like a Girl” or “Soulmate,” the latter of which literally extols the virtues of being in love with “that bitch in the mirror,” knew the message.

There were at least three extended monologues on this topic from Lizzo, offered long after her robe had been stripped away and left her exposed in a golden corset. Nearly bare and baring her soul, these forays into “self-love” might have become tiresome in some other place and time. But Lizzo is a big, black woman whose choice to appear nude on her major label debut album cover has been seen as a bold move to promote body positivity. And, as she told the audience last night, there’s a whole faction of people in this country suddenly feeling empowered enough to shame and hate others for their size, race, gender or sexual orientation. If Lizzo needs to sermonize against that between body-movin' songs to help others take her uplifting message to the streets and to heart, then stand back and let her preach.

It wasn’t all preaching. It takes a full squad of backup dancers – The Big Grrrls – to match Lizzo’s energy and they were spotlighted doing the “Jigalow game” like the coolest Girl Scout troop ever before “Like a Girl.” DJ Sophia Eris, who opened the night with a deejay set, stood in the booth nonchalantly fanning her face during the intro to “Jerome.” In the intro, Lizzo went on a diatribe about "fuckboys," with which far too many of the women in the crowd could identify. There were plenty of these choreographed but bonding moments between Lizzo and her stage mates and all that sisterhood spilled into the crowd.

Lizzo and The Big Grrrls
Photo by Jennifer Lake Reister

The message is also delivered in the form of music, of course. Some of the musical highlights included the title track “Cuz I Love You,” which allows Lizzo to show off some impressive pipes. After she held a note for Mariah Carey lengths, the crowd erupted. During the cheers, Lizzo mouthed “Was that me?” acting impressed by her own vocal prowess. “Worship” included the “R-E-S-P-E-C-T” stanza of the Aretha Franklin song and that one had undertones of Prince and Carlos Santana in the music. “Boys” was a disco romp that had the crowd singing and dancing and, after receiving an Elsik High T-shirt from an audience member (a nod to her roots in Alief), she invited the gathered to sing along to the number one song in the country, “Truth Hurts,” and naturally we all obliged.

Just ahead of show-closer “Juice,” Lizzo treated the audience to a flute solo. No one since Alyson Hannigan in American Pie has made the instrument seem as cool as Lizzo. As she wailed on, it became apparent that this force of a woman must have at one time been an insecure youth. If you looked closely enough, you could almost imagine her as an uneasy kid practicing the instrument. She seems superhuman now but she had to have had doubts once, in her younger band nerd days. But now, with a whole world as her pulpit and a timely message worth delivering, she has the ability to make sure others don’t get derailed by self-doubt. That’s a sermon worthy of a hearty “Amen.”

The Opener: Lizzo preached self-love on the heels of opener Ari Lennox’s set, during which Lennox asked the crowd, “How many of y’all have been fucked in the back seat of a car before?” That was the lead into the track “Backseat.” There’s no mystery what the song is about, and it’s the subject of lots of songs from Lennox’s debut album. The J. Cole protegee was not messing around last night. Her songs are made for love with other selves and her sultry voice carries her own message home in its own provocative way, especially on songs like “BMO” and “Shea Butter Baby.” The latter is the title track to Lennox’s debut LP and it conjures two lovers lost in an alley and making love by a trash can. You know you’ve gotta have skills to make that scenario sound sexy. 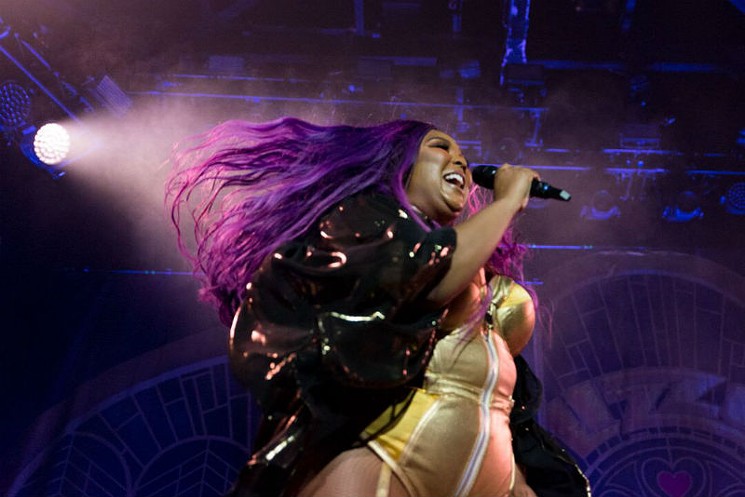 Personal Bias: Five years ago when Free Press Summer Fest was still a thing, it boasted a ridiculously talented lineup. Some of us were tasked with naming the “best surprise” of the festival, which included Jack White, Ms. Lauryn Hill, Childish Gambino and Cage the Elephant. My pick was Lizzo, who played an early afternoon set on the smallish Jupiter Stage (damn, don’t y'all miss FPSF?!). That afternoon she told the gathered that, as far as she was concerned, the satellite stage was the main stage. As a one-time Houstonian whose music was informed by what she heard here, she longed to play the festival. Even back then, it was apparent she had the talent to become main stage material. Here’s hoping her ongoing efforts keep her headlining, where she belongs.

Random Notebook Dump: You can learn a lot about a crowd by observing its reaction to the house music in between sets. Last night, there was a massive group sing-along to “I Write Sins Not Tragedies” and hardly anyone rapping along to “Mo City Don.”  Also, some of you were under the impression we couldn’t see you in the shadows and far-off distance, but we saw y’all backing that azz up, up there in the balcony.

Cuz I Love You

Exactly How I Feel 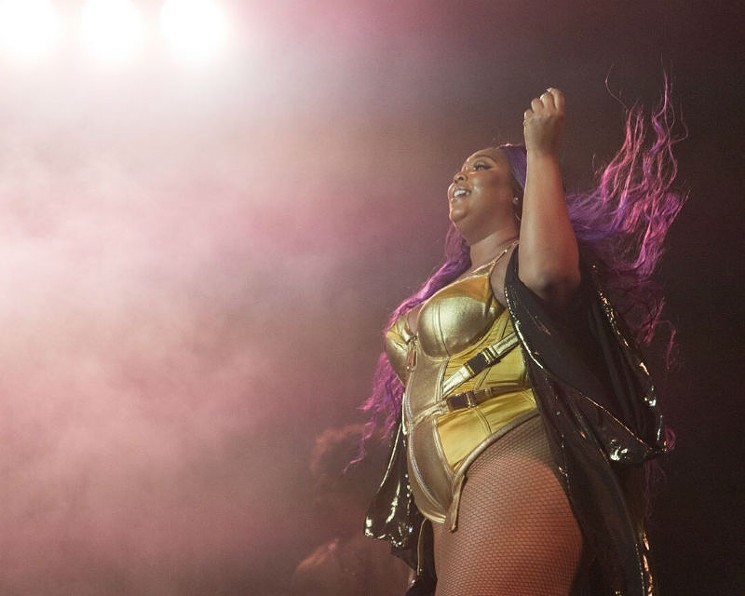 Juice
KEEP THE HOUSTON PRESS FREE... Since we started the Houston Press, it has been defined as the free, independent voice of Houston, and we'd like to keep it that way. With local media under siege, it's more important than ever for us to rally support behind funding our local journalism. You can help by participating in our "I Support" program, allowing us to keep offering readers access to our incisive coverage of local news, food and culture with no paywalls.
Make a one-time donation today for as little as $1.