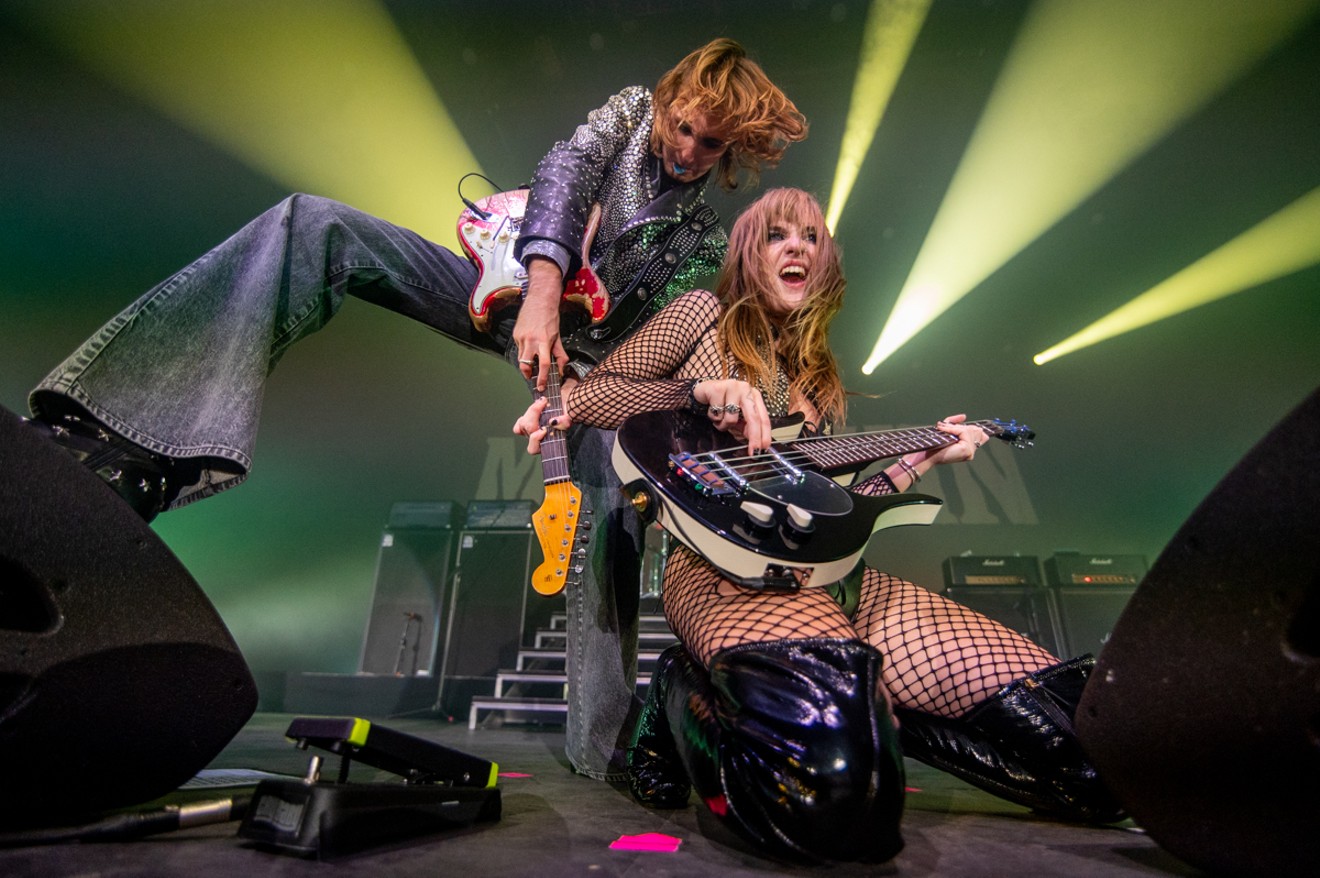 Thomas Raggi and Victoria De Angelis crush the sold-out 713 Music Hall. Photo by Jack Gorman
The Italian rock band Måneskin stopped in Houston Monday riding a wave of momentum after playing Rock in Rio in September and starting the U.S. leg of The Loud Kids Tour the following month. Originally scheduled at Bayou Music Center, the sold-out concert was moved to the larger 713 Music Hall.

The night began in an odd manner as venue lights and emergency warnings came on at 8:50 p.m. and a recording played asking everyone to calmly leave the building. As people hesitantly looked at each other, security quickly announced that it was a false alarm. Two minutes later, the show started.

Thomas Raggi plays in the middle of the crowd at 713 Music Hall.
Photo by Jack Gorman
It is not often that a venue sells out a Monday night show especially when school in is session. Some fans were overheard talking about when they arrived early so they could be first up against the barricade when the doors opened. Many fans held up signs — the most memorable with beautifully lettered words that said, “Spit on Me.” Thankfully that did not happen as far as we know.

Red lights were trained on the group as the quartet burst onto the stage breaking into “Kool Kids.” Through the night they jumped from one genre to another — punk, pop, metal, ballads — and sang in both Italian and English. Vocalist Damiano David, guitarist Thomas Raggi and bassist Victoria De Angelis criss-crossed the stage, at times narrowly avoiding colliding with each other's bodies or instruments. 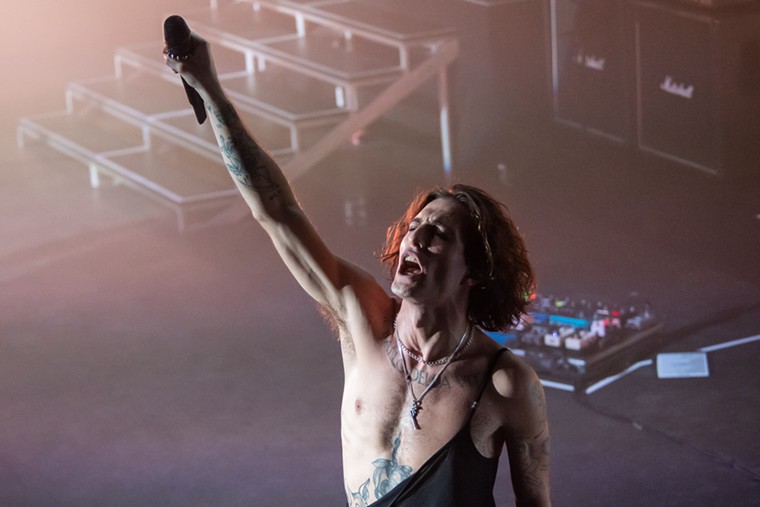 Damiano David takes in the crowd at 713 Music Hall.
Photo by Jack Gorman
Drummer Ethan Torchio kept the troupe on point. His bandmates regularly walked up the stairs to play along with him up on the drum risers. 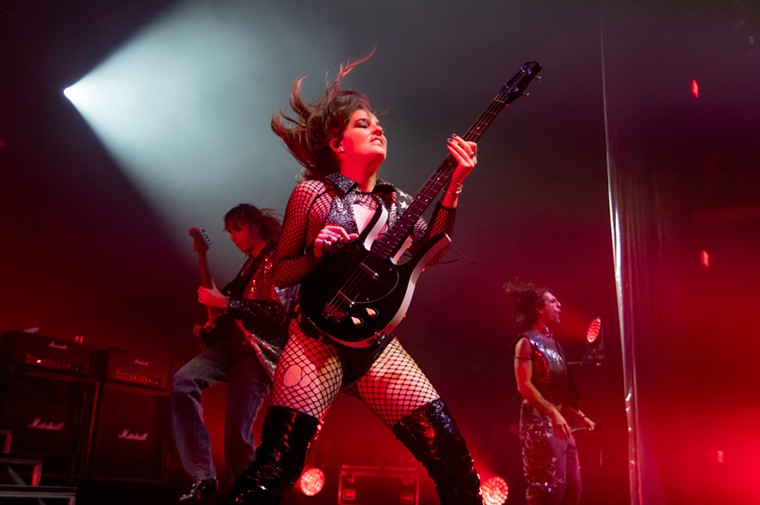 Måneskin play 713 Music Hall during The Loud Kids Tour.
Photo by Jack Gorman
Raggi and De Angelis ventured into the crowd multiple times while playing. She did slip and fall hard onto the concrete floor when she made her way back around to the security railing to go back on stage. The hard thud must have been exceptionally painful and will definitely leave a mark that fans in Dallas will no doubt see. The spill had no effect on her remaining performance.

David came down to sing on the barricade steps to the appropriately titled, “Touch Me.” During the last song before the encore a large group of fans selected earlier in the show were brought up on stage to be up close and personal with these true to life rockstars. Måneskin (which means "moonlight" in Danish) has already reached superstar levels of fame across Europe. The packed crowd at the old Barbara Jordan Post Office knows they deserve it. It is time for the rest of the United States to get on board too. 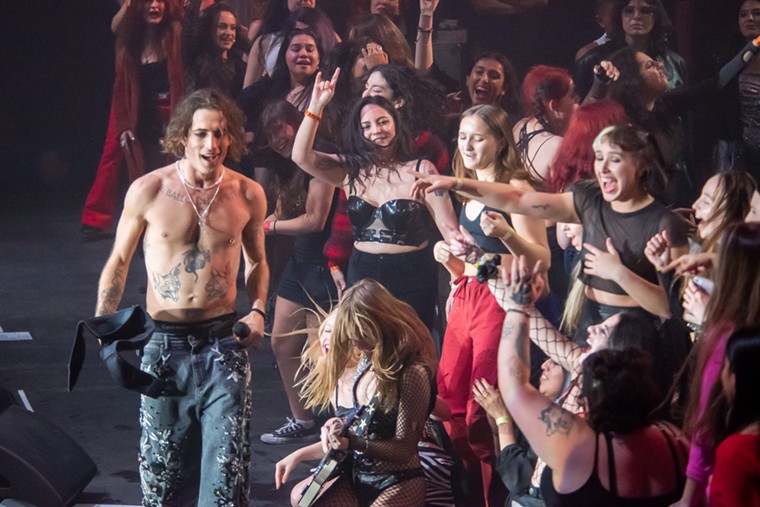 Måneskin enjoying their Houston fans up close.
Photo by Jack Gorman
Setlist
KOOL KIDS
ZITTI E BOUNI
IN NOME DEL PADRE
SUPERMODEL
Close to the Top
CORALINE
Beggin’
I WANNA BE YOUR SLAVE
FOR YOUR LOVE
I Wanna Be Your Dog
VENT’ANNI
Gasoline
Touch Me
My Generation
MAMMAMIA
LIVIDI SUI GOMITI
THE LONELIEST
WANNA BE YOUR SLAVE 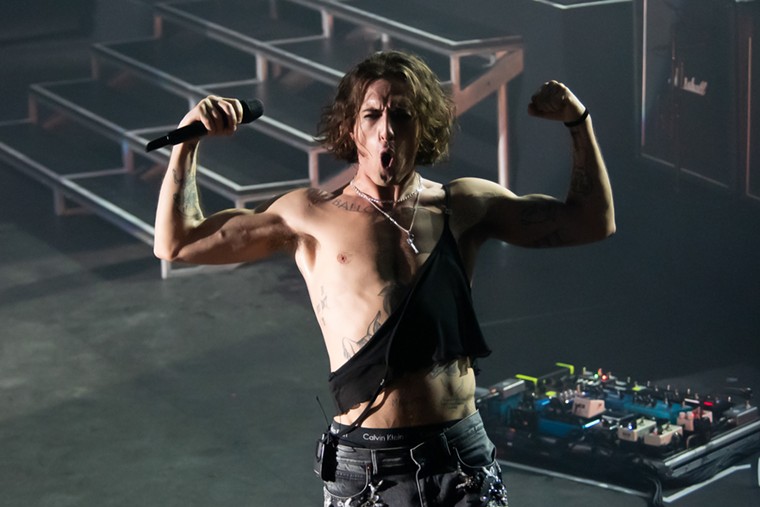 Damiano David shows his rockstar flex at 713 Music Hall.
Photo by Jack Gorman
KEEP THE HOUSTON PRESS FREE... Since we started the Houston Press, it has been defined as the free, independent voice of Houston, and we'd like to keep it that way. With local media under siege, it's more important than ever for us to rally support behind funding our local journalism. You can help by participating in our "I Support" program, allowing us to keep offering readers access to our incisive coverage of local news, food and culture with no paywalls.
Make a one-time donation today for as little as $1.