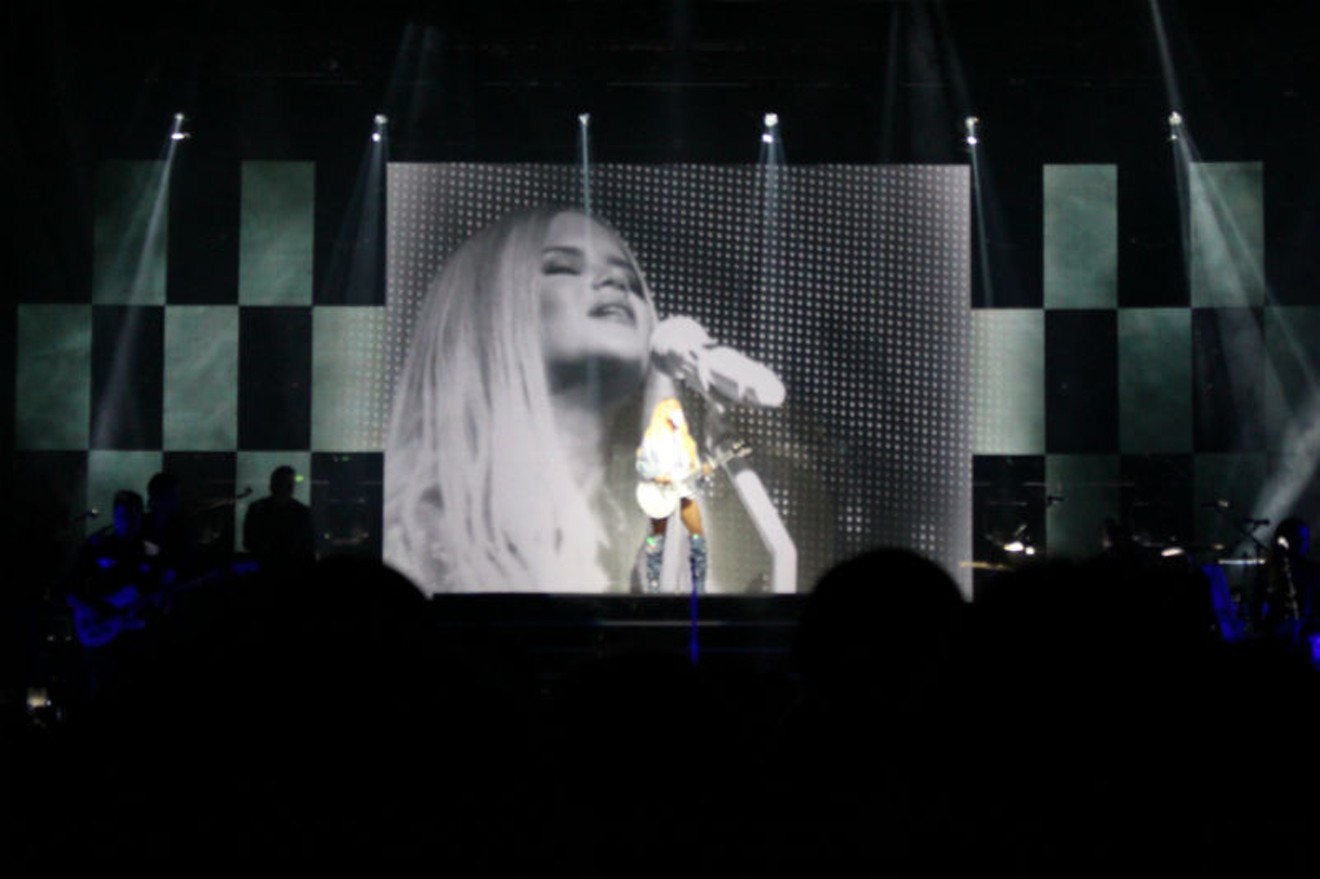 Maren Morris devotes much of her new album, Girl, and most of her current live set to female empowerment and her campaign has clearly reached its target audience. Leaving her sold out Houston show last night at Revention Music Center, we followed some fans down Texas Avenue to our respective parking spaces and spied evidence for just how resonant the message is.

A gay couple held hands and chatted about the show and walked ahead of a fellow excited fan who wore a T-shirt to the show which read, “I Stand for the Flag and Kneel for the Cross.” These fans, seemingly divergent in philosophies and lifestyles, were all in Morris’s key demographic of women under 40. They also seemed entirely comfortable expressing their truths, just as Morris preaches. Drawing a broad swath from traditionally liberal fans with the generally conservative "God and Country" crowd says a lot about Morris’s impactful songwriting and the voice which delivers its words.

If the pop country phenom from Arlington was selling snake oil, she’d probably still have plenty of buyers. After all, her voice is incredible. Like the best hucksters, she could simply employ it to charm her captivated consumers and convince them she had the right medicine for whatever was ailing them. But, moments during  last night’s 19-song set proved what she’s peddling is no placebo. She offered examples for how she healed herself by trusting her gut when someone – usually a man – thought they knew better.

For instance, her label advised against touring so soon on the heels of a new release. Better to let the album create some traction and familiarity for ticket sales. But, she said, she wanted to play the songs live for fans as soon as possible. And so there she was, standing before a sold-out Houston crowd, one filled with fans who helped Morris break the record for the highest number of streams by a female country artist the first week of a new release. Girl was dialed up nearly 24 million times the week it debuted in early March.

While introducing “I Could Use a Love Song,” one of her biggest hits, she reflected back on the success of the prior release, “80s Mercedes,” both from the debut album Hero.

“I was trying to think of what the next move would be and I remember talking to this program director at a radio station, not here in Texas but it another state,” she began. “I gave him my idea, I’d kind of like (the follow-up) to be this song because it’s a really meaningful song to me and he was like, ‘No, no, no, no. People do not want to hear sad women on the radio.’”

Jeers from the crowd.

“So, I did not take his advice and I put this on the radio anyway and I watched it climb each week,” she said. “And it took 42 weeks but that guy lost his job and I got my first No. 1 song."

Cheers from the crowd.

Stories like that, coupled with video segments to reinforce the notion, set the tone for the audience, which by guesstimate was two-thirds women. Many crowded near the stage to get an up close and personal view, but lots hung near the back of the hall so they could dance with abandon to favorites like “All My Favorite People” and “Rich.” The crowd got to sing an entire verse of that one and was lauded by Morris, who said, “Hey! That was good! All right, Houston, y’all can sing.”

Yeah, maybe, but Morris can really sing. The new album is a showcase for her versatility. Listen to “Gold Love” and you hear R&B. On “Common,” she goes a bit gospel, despite the questioning and poignant theme of the song and the line, “If I’m being honest, I don’t know what God is.” She’s jazzy on the sizzler “Make Out With Me,” which she sang effortlessly while lying on her back to amp up the vamp. Her pop sensibilities are firmly entrenched now, thanks to the global success of “The Middle,” the night’s closing song and one she said changed her life last year. There’s even a hint of reggae in “Flavor,” the self-esteem booster that also sounds like an episode of your favorite TV cooking show.

Morris’s voice alone could be the antidote if you’re feeling weak. But her songwriting and living example make her cure full-strength. Near the end of her set, she remembered toiling away in music's lonely laboratories and how important it’s been for her to receive some therapeutic love, too.

“A lot of people in the crowd have watched me grow up here in Texas playing shows for literally nobody,” she said. “I’ve been doing this since I was ten, playing in bars and shit, and like 20 years later I’m still getting to do it and I still feel very much at the front end of it. So, thank you for giving that to me.”

Morris has been performing since she was ten and now sells out shows worldwide
Photo by Jesse Sendejas Jr.

The Opener:  Baytown’s own RaeLynn made it a night of talented Texas women onstage and the former The Voice contestant was clear about her role. She was there to prime the audience for “the queen,” as she put it. And, she handled those duties with a set that reflected Morris’s, with pauses for personal tales about the songs (“Love Triangle”), familiar, crowd-pleasing toe-tappers (“Tailgate”) and party-starters (“Rowdy”). Because she’s from right up the road – but obviously headed places – she knew Houston would get wild on a Thursday night. “Rowdy” closed her set and she returned during Morris’s to join up for “All My Favorite People,” which must have carried extra meaning for her playing a show before so many friends and family members.

Personal Bias: True story – yesterday morning, I hit snooze on my alarm and was rocked back to sleep by the early thunderstorms. I dreamed that I was fighting a guy. For some reason, he was in a leather jacket but I don’t believe that’s why we were brawling. Rather than one of those melodramatic instrumentals from '70s action shows like Starsky & Hutch, Morris’s song “Girl” was the soundtrack for this action sequence. I’m no Jung, but here’s my analysis: the song is a perfect anthem for a struggle. In the dream, I was fighting for something or against some adversary, so “Girl” was the fight song. In waking life, I read through its lyrics and found that its plea to plug on through the fortitude can apply to nearly any difficulty. It is, of course, given so much more power by Morris’s expressive voice, which is both urgent and reassuring in this mega-hit. I’m not prone to real-life violence, but if I’m ever in a tussle, I’ll pick “Girl” over “Gonna Fly Now” from the Rocky movies or Drowning Pool’s “Bodies.”

The Crowd: Girls, women, lots of people on date night at Revention and one Jake Gyllenhaal doppelganger wearing an Astros cap.

Random Notebook Dump: The beauty of music is we get to share it, when we find artists and songs we admire we pass them on to others. Shout out to my sister-in-law Tisha who first got me hip to Maren Morris and is my go-to expert for all things country music. I've returned the favor once or twice, introducing her to Austin's Ameripolitan princess Whitney Rose and having her drive her '80s Mercedes down to Continental Club for Houston's own Xanadudes. I know you couldn't make it last night, sis, but trust me, your “Girl” killed.

A Song for Everything

All My Favorite People

I Could Use a Love Song

Make Out with Me

The Middle
KEEP THE HOUSTON PRESS FREE... Since we started the Houston Press, it has been defined as the free, independent voice of Houston, and we'd like to keep it that way. With local media under siege, it's more important than ever for us to rally support behind funding our local journalism. You can help by participating in our "I Support" program, allowing us to keep offering readers access to our incisive coverage of local news, food and culture with no paywalls.
Make a one-time donation today for as little as $1.