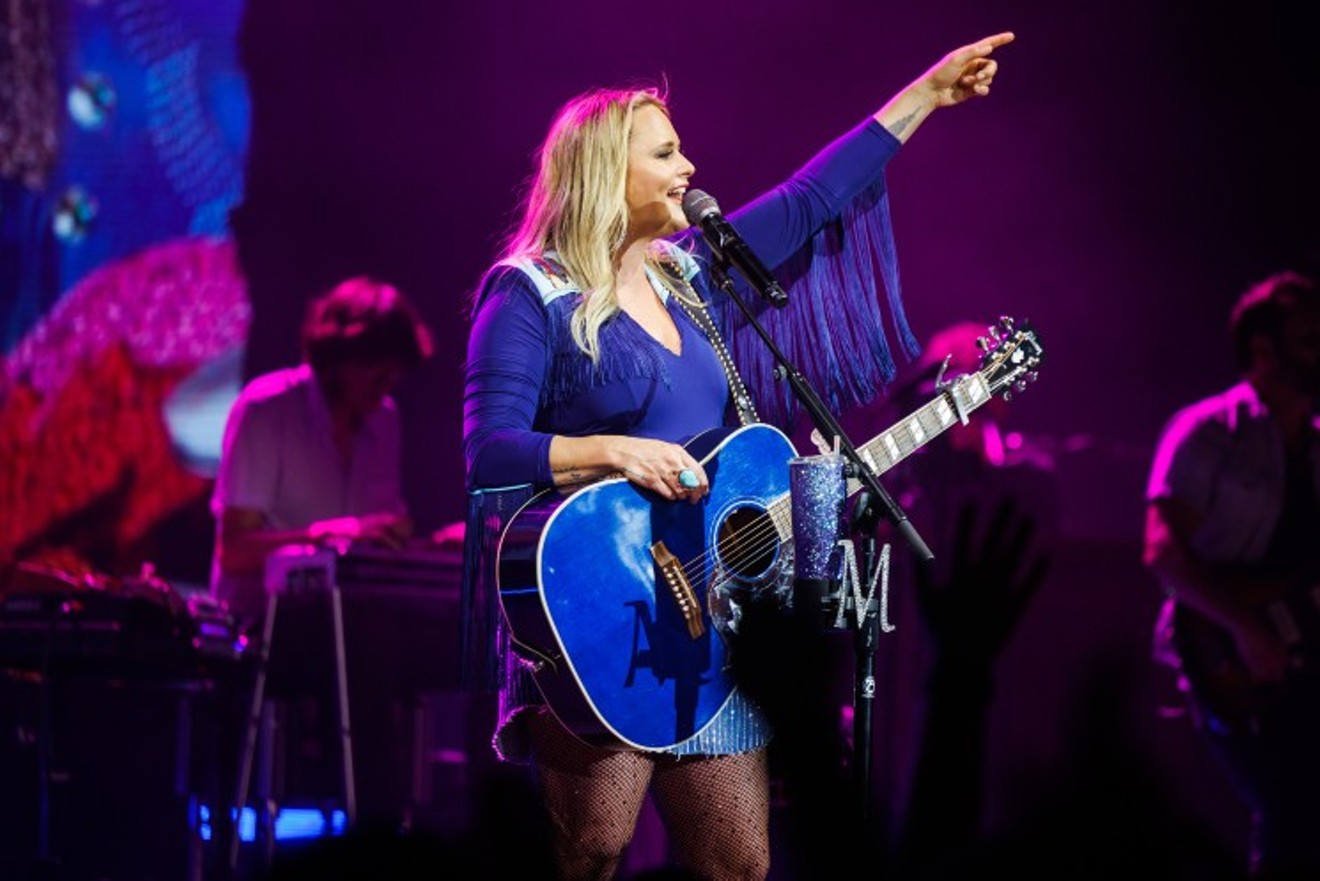 Miranda Lambert Photo by Evan De Stefano
The theme to last night’s Houston stop of the Bandwagon Tour — featuring co-headliners Miranda Lambert and Little Big Town — was nearly, almost, just about captured perfectly when Little Big Town added a touch of The Beatles to “I’m With the Band,” one of their hit songs.

That vibe was shared by besties taking in the show together, big groups out for girls’ night out, as well as sisters and mothers and daughters who all had tickets and a good time. Those who earnestly tried to live up to the lyrics of Lambert’s recent megahit “Drunk (And I Don’t Wanna Go Home)” were chaperoned and chauffeured by the women in their company. They were overheard sharing relationship tips and just encouraging each other to let loose and have fun.

That vibe emanated from the stage at Cynthia Woods Mitchell Pavilion, where the spotlight was big enough for Lambert and Little Big Town vocalists Karen Fairchild and Kimberly Schlapman to comfortably share it. Country music giants in each’s own right, they thrilled a packed Pavilion with hits from their long careers, nearly 40 in all performed over just a few hours. Some of the best moments were those they shared together to close out the night’s music.

The co-headliners began their sets a few minutes after 8 o’clock, with Little Big Town taking the stage to “Next to You,” the opening track from 2020’s Nightfall. This portion of the set included 13 songs spanning the band’s Grammy, AMA, CMA, ACM and Emmy (yes, Emmy) award-winning career. If there was an indicator as to how things might go, it could have been in the fashion choices made by Schlapman and Fairchild. The former wore a black skirt dotted with yellow smiley faces. Aside from the many show-goers near us who remarked on its cuteness, it suited the upbeat feel of the night. Folks were at a concert together, breathing the shared air, singing along to songs like “Day Drinking” and “Rollin’” that reminded us of pre-pandemic fun times. Smiley faces on the skirt and in the crowd.

Fairchild chose a top emblazoned with a tiger, which was also fitting. Songs like “Self Made” and the newer “Hell Yeah” showed some ferocity in the band’s lyrics and stage presence. The tiger prowled hard for “The Daughters,” a call to female empowerment not lost on the many women in attendance. Everyone in the seats and on the hill roared (yeah, like a tiger) when Fairchild sang, “Damn, I look good in this dress.” All of this fashion talk is just to make the point that well-written songs and a quartet of skilled singers is something that hardly goes out of style. Little Big Town was first on the runway and they strutted magnificently.

Lambert and Little Big Town performed more than three dozen songs on opening night of their Bandwagon Tour
Photo by Evan De Stefano
Lambert started her solo set with “Actin’ Up,” a track from Palomino, her newest album and the eighth studio record of her now legendary career. It was the perfect set up for the set, which bounced between tenderhearted, vulnerable tunes like “Bluebird” and “The House That Built Me” and the stuff she truly excels at, songs which allow her to be a complete and total badass. In this section, she offered to burn it all down with “Kerosene,” to redefine the definition on “If I Was a Cowboy” and to settle things with “Gunpowder & Lead.” Seeing her don a smirk and lean into the aggressive lyrics on those songs made it worth the price of admission.

It took only a few songs to learn that Lambert’s voice was already in midseason form. Like Diana Taurasi on a roll, she hit every shot she took, sinking our hearts on a sparse version of “Tin Man” and slam-dunking the drink-slamming favorite “Tequila Does.”

Little Big Town returned to the stage to close out “Tin Man” with Lambert and the groups joined forces for the balance of the show, showcasing big hits with fun placement, keeping the crowd on its feet and singing lustfully to “Little White Church” and then “Little Red Wagon.” The pre-encore tunes ended with crowd favorite “Drunk (And I Don’t Wanna Go Home), Lambert’s 2021 hit with Elle King. The spotlight widened for her and Little Big Town’s ladies, who handled King’s vocal parts. And it kept expanding into the encore when the bands saluted Naomi Judd with “Grandpa (Tell Me ‘Bout the Good Old Days)" and followed with The Beatles “Let It Be.” That one had everyone — the women and the men, onstage and in the crowd — singing together to end a successful opening night of tour.

Personal Bias: Two of the first Miranda songs I ever heard were “Mama’s Broken Heart” and “Little Red Wagon” thanks to my sister-in-law, who is a huge Lambert fan and also a huge karaoke fan. My brother and sister-in-law joined us for last night’s show so it was sort of a full circle moment getting to hear Miranda sing those favorites from our karaoke nights live and in-person.

The Openers: The Cadillac Three opened the show while the sun was still blazing in the summertime sky (Oh, it’s not summertime? Sure felt like it). We’d have needed a NASA rocket built by those Hidden Figures women to zoom past the Pavilion’s incoming traffic to have caught their set. We watched the Southern rock band with a bit of FOMO on the screens in the concession area from outside the venue’s gates. The trio is fronted by guitarist/vocalist Jaren Johnston who has written for Keith Urban, Tim McGraw and others and he exuded cool playing a Flying V and wearing a Springsteen T-shirt and a ballcap that read “Cannabis Cowboy.” We didn’t hear much but what we heard we liked and they were a perfect set up for all the rock and roll nods that were to come in a night of country music.

The Crowd: Girl crushes who are just like you — Only Prettier.

Overheard in the Crowd: “I’ve never heard of The Cadillac Three. They sound pretty cool. I bet they’d be good to see in a small venue.”

“Let me pee, let me pee,” sang a fellow at a urinal to the tune of the Beatles “Let It Be,” moments after the bands closed with an emotional cover of the classic rock classic. Sometimes men are dumb.

“He’s talking about ‘My heina, my ruca’ and all that other shit,” a cowboy hat-wearing woman told her two girlfriends as she rolled her eyes about some guy.

The tour is now headed for 14 additional cities in the US and Canada
Photo by Scott Shaver
Random Notebook Dump: Lambert is not just a music superstar, she’s also a superstar in the animal rescue world. She founded MuttNation more than a dozen years ago to promote the adoption of shelter dogs and the importance of spaying and neutering. Ahead of the show, in the cozy and fully air-conditioned Pavilion Lounge, we caught several ads for the non-profit organization between sets and surfed over to its website. There’s lots of good, valuable information on the site about its critical subject matter. If you live in Houston, you’re fully aware of the city’s stray dog overpopulation. There are many essential rescues and organizations doing the everyday hard work on this problem in Houston. If you’re a Miranda Lambert fan and share her love for dogs, check out the foundation’s page and learn more about the organizations in this city providing these needed services.

Miranda Lambert with Little Big Town Set List
Tin Man
Better Man
Music City Queen
Boondocks
Wine, Beer, Whiskey
White Liar
Little White Church
Little Red Wagon
Drunk (And I Don’t Wanna Go Home)
Grandpa (Tell Me ‘Bout the Good Old Days)
Let it Be
KEEP THE HOUSTON PRESS FREE... Since we started the Houston Press, it has been defined as the free, independent voice of Houston, and we'd like to keep it that way. With local media under siege, it's more important than ever for us to rally support behind funding our local journalism. You can help by participating in our "I Support" program, allowing us to keep offering readers access to our incisive coverage of local news, food and culture with no paywalls.
Make a one-time donation today for as little as $1.