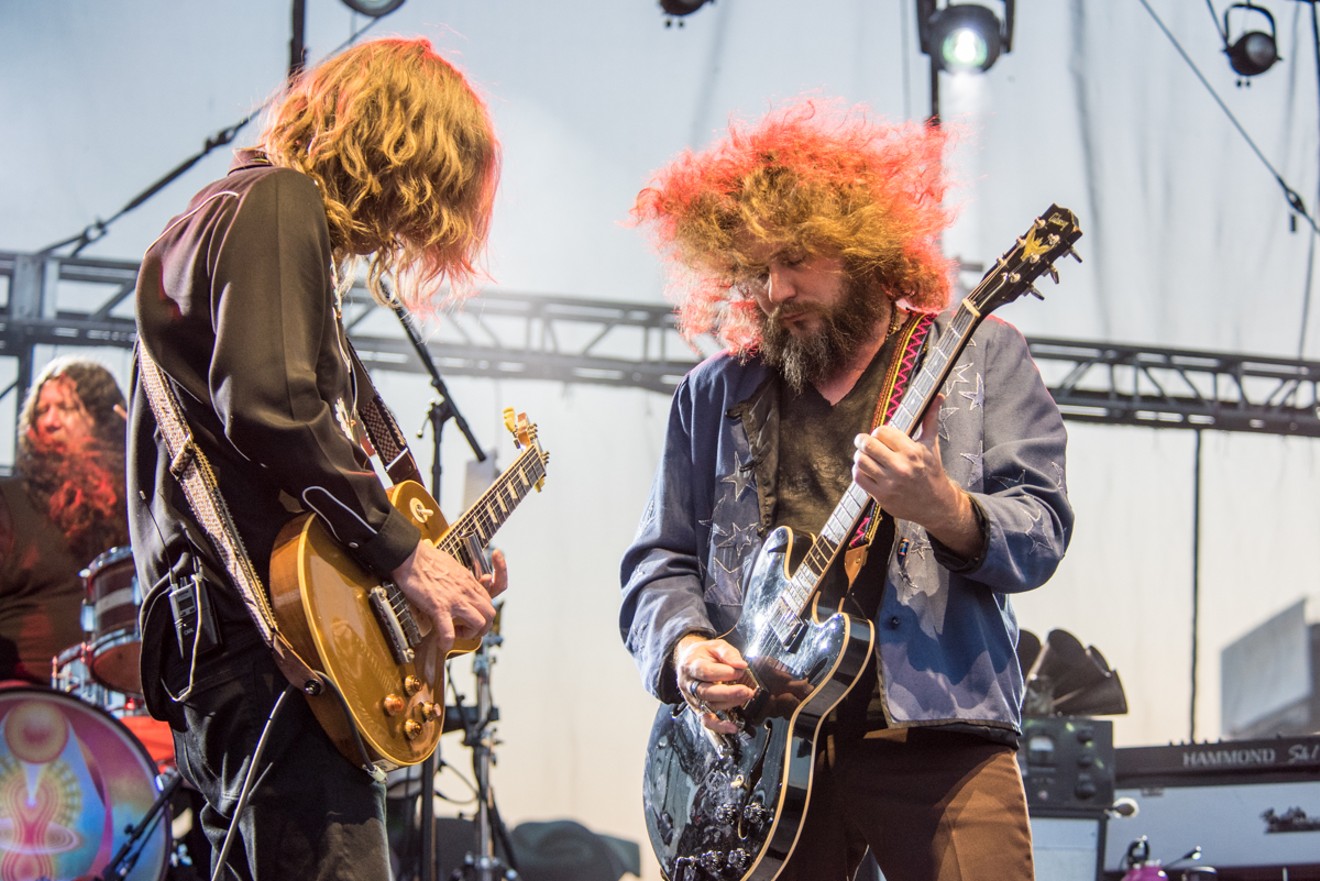 Jim James and Carl Broemel jam at WOMH. Photo by Jack Gorman
It was a perfect evening for a midweek concert with My Morning Jacket on the Lawn at White Oak Music Hall. The Chamber of Commerce weather of 76 degrees, clear skies and a slight breeze provided a superb backdrop. The band walked on stage at the at 7:30 sharp to a group of fans singing “Happy Birthday” to frontman Jim James and drummer Patrick Hallahan.

A younger generation lined up and wrapped along the sidewalk of North Street waited to be checked for security for the Molchat Doma show inside WOMH and were serenaded by James’ impeccable vocals free of charge. The quintet jammed out to songs spanning their expansive catalog that would have appeased the most hardcore MMJ fan. When the band was not rocking the neighborhood, the reverb of James’ voice and Carl Broemel’s slide guitar emanated a spacey and flowy vibe to many of the songs.

Jim James demonstrating his craft.
Photo by Jack Gorman
The timing of “Victory Dance” may have been coincidence or brilliantly planned in that the sun lowered below the trees as James sang the chorus of “Hope to watch the victory dance in the evening’s setting sun.” As the night sky darkened, the stage lights began to become more pronounced and the vibe shifted from feeling like a daytime festival stage to the standard stage.

Interestingly, the cover art of the band’s self-titled LP was prominently featured on Hallahan’s kick drum and it seemed that the light shown on it would change from song to song signifying the album the particular song was from. For instance, a shade of blue, the prominent color from the cover art of Z, illuminated the drum when “Wordless Chorus” was played and a deep shade of green covered it during “Victory Dance” from Circuital.

Drummer Patrick Hallahan and bassist Tom Blankenship provide the foundation for MMJ's groove.
Photo by Jack Gorman
A night to night changing of the setlist is a tactic that not many artists employ this day in age. Often fans can view a band's setlist online and know exactly what is going to be played a month or more before it is played live in front of them. More artists should do this to prevent their craft from becoming stale for themselves and the fans.

James and crew plowed through their hits and refrained from the banter between songs. But any talk from the frontman to the crowd was filled with sentiments about Houston being a wonderful place and his thanks to everyone there for coming.

The band’s instrumental precision was on point through out the evening, but really stood out during the encore of “Touch Me I’m Going to Scream, Part 2” as mid-song the music fades to a near silence and then comes back intensely to complete the song.

The lawn at White Oak Music Hall is arguably the best venue to watch a concert in town, especially when the weather is great. On top of the superior sound and lighting, the show was sold close to capacity and there was ample space to move about along with multiple spots to quickly grab a drink and plenty of bathrooms. The midweek show was perfect all around. MMJ superbly played for two hours and 20 minutes and got home to watch the last inning of the Astros game.

Personal bias
It Still Moves played in the background while I pitched woo to my future wife while sitting in completely stopped in I-10 traffic between Houston and San Antonio. The band has a special place in our hearts.

Encore
Wordless Chorus
Touch Me I’m Going to Scream, Pt. 1
Touch Me I’m Going to Scream, Pt. 2
Mahgeetah
KEEP THE HOUSTON PRESS FREE... Since we started the Houston Press, it has been defined as the free, independent voice of Houston, and we'd like to keep it that way. With local media under siege, it's more important than ever for us to rally support behind funding our local journalism. You can help by participating in our "I Support" program, allowing us to keep offering readers access to our incisive coverage of local news, food and culture with no paywalls.
Make a one-time donation today for as little as $1.