Austin Richard Post is renowned for wearing his heart on his sleeve.

Better known by his stage name Post Malone, the chart-topping singer-songwriter has made a name for himself by combining elements of pop and rap music, with an emphasis on sentimental lyricism. It wouldn't be fair to dismiss him as the second coming of Drake, but it wouldn't be too far off either.

For each pensive bar about an ex who did him wrong, the Dallas native is wont to make a boastful proclamation, taking jabs at would-be critics and barely sidestepping the designation of "sad-boy." It's a balancing act few expected him to be able to maintain early in his career, but with every new release Post's star has only gotten brighter.

On tour in support of his third record, Hollywood's Bleeding - the most-listened-to album of 2019, according to Nielson data - Post brought the “Runaway Tour” to Toyota Center on Monday for his second performance in the Bayou City in just four months.

"I'm here to play y'all some shitty fucking songs and get fucked up while I do it," Post told the crowd just five minutes into the show. And to his credit, he made good on both declarations.

The evening began with the titular track from his latest outing. Like so many of Post's songs, it started calm and moody before building into an erratic, upbeat anthem that was so catchy, it was as if he was daring listeners to try to remain still. 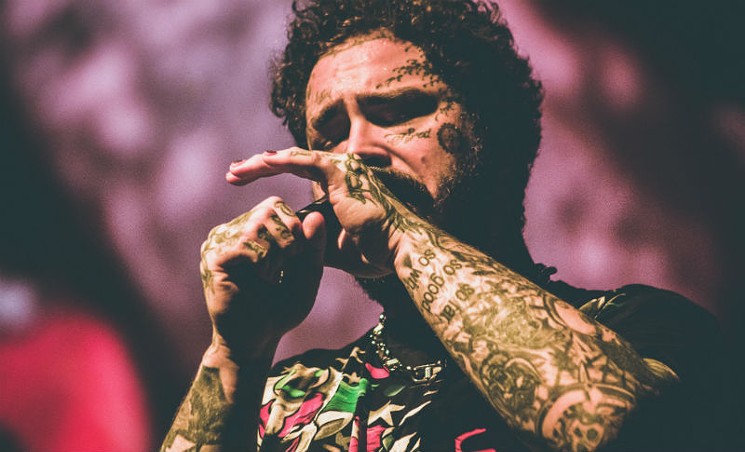 Specializing in heartbreak
Photo by Robyn Tuazon
From there, Post launched into one of the best heartbreak anthems of the 2010s, "Better Now," which bemoans the end of a relation and yet - somehow - manages to feel like a celebration. Later, he lamented his inability to say goodbye to unhealthy relationships and shared his propensity for paranoia.

In between, he honored his Texas roots on "Candy Paint," boasted about an expensive wristwatch on "Psycho" and talked about memorable nights out on "Go Flex." Somehow, despite all the melancholy, every aspect of the concert felt triumphant as fans danced, sang along and screamed their adoration for one of the hottest contemporary artists of any genre.

Post Malone doesn't write music to ruminate on. His lyrics are straightforward to a fault, but he taps into one of the most unifying emotions in the world: heartbreak. And on Monday night he managed to espouse a state of mind that fans could relate to without feeling too despondent.

With every bit of new music and every show, Post seems to be developing into a better songwriter, a better singer and, above all, a better performer. And maybe his resilience in the face of everyone who predicted his downfall years ago - coupled with a willingness to try new things and penchant for catchy hooks - is the trick to selling out Toyota Center twice in a single year.

Here's betting he does it again within the next 12 months.