Prince Royce Turns Up The Heat at RodeoHouston To some, performing inside the cavernous NRG Stadium is akin to performing on the moon. The stage is as large as a space craft, and the audience is seated way far away on the horizon. The performers are literally placed at the 50-yard line, trying to throw a Hail Mary with every song, hoping and praying for a miracle touchdown to win over the crowd.

Great performers take on this daunting task head on, not allowing the location to get the best of them. Last night at RodeoHouston, Bronx native and Latin Pop superstar Prince Royce owned the stage.

While most Rodeo acts stay hidden behind the microphone, Royce let loose, running all around the star shaped contraption and even climbing on the fences, kissing fans, serving them drinks, giving out roses to the ladies, and shaking hands with all his fans.

"This place is freaking huge!" he yelled in amazement as he took a breather from running around the venue. "Everything is definitely bigger in Texas!" 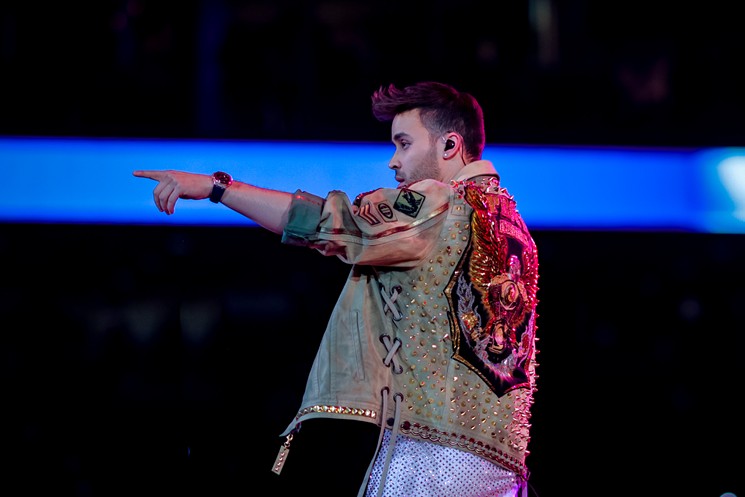 Roses for the ladies and beers for the fellas, Prince Royce's performance was all-inclusive.
Photo by Marco Torres

Royce also urged everyone to take a moment to appreciate their friends and family. He paused while the crowd hugged their loved ones, reminding them that life and love is precious, and should be cherished.

The first set of songs included his Spanish cover of "Stand By Me" which was an early hit in his career, followed by the more contemporary track "Bubalu" with Anuel AA and Becky G.

Then, for the second night in a row, the Rodeo headliner performed a cover of Queen Selena Quintanilla. Royce slowed the tempo way down and sang "No Me Queda Mas" while illuminated by thousands of cell phone lights from the massive crowd.

Twenty four years ago to the day was when Selena last performed on the legendary Rodeo stage before her untimely death. It certainly is amazing how her music and charisma continues to make an impact on today's artists. The 29-year-old Bronx native made himself at home at NRG Stadium.
Photo by Marco Torres

"Adicto", "Sensualidad", and "El Clavo" filled out the rest of the set list, followed by an encore of "Ven Conmigo" and "Darte Un Beso".

"Es un placer estar aqui!" he thanked the crowd, letting everyone know that he was so happy to be at RodeoHouston.

He left with a simple request for everyone in the audience, or more of a wish...

(Health, sweetness, love, and family for all!) 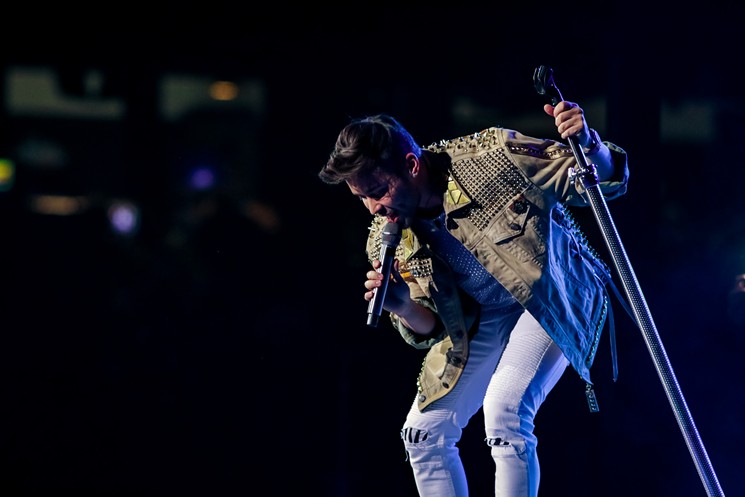 Songs about love and lust sounded so sweet coming from the baby-faced Latin Pop star.
Photo by Marco Torres
click to enlarge

For a second night in a row, RodeoHouston was treated to a cover of one of Selena's biggest hits.
Photo by Marco Torres
KEEP THE HOUSTON PRESS FREE... Since we started the Houston Press, it has been defined as the free, independent voice of Houston, and we'd like to keep it that way. With local media under siege, it's more important than ever for us to rally support behind funding our local journalism. You can help by participating in our "I Support" program, allowing us to keep offering readers access to our incisive coverage of local news, food and culture with no paywalls.
Make a one-time donation today for as little as $1.