Scorpions Give Us A Mercifully Hurricane-Free Rocking At Toyota Center 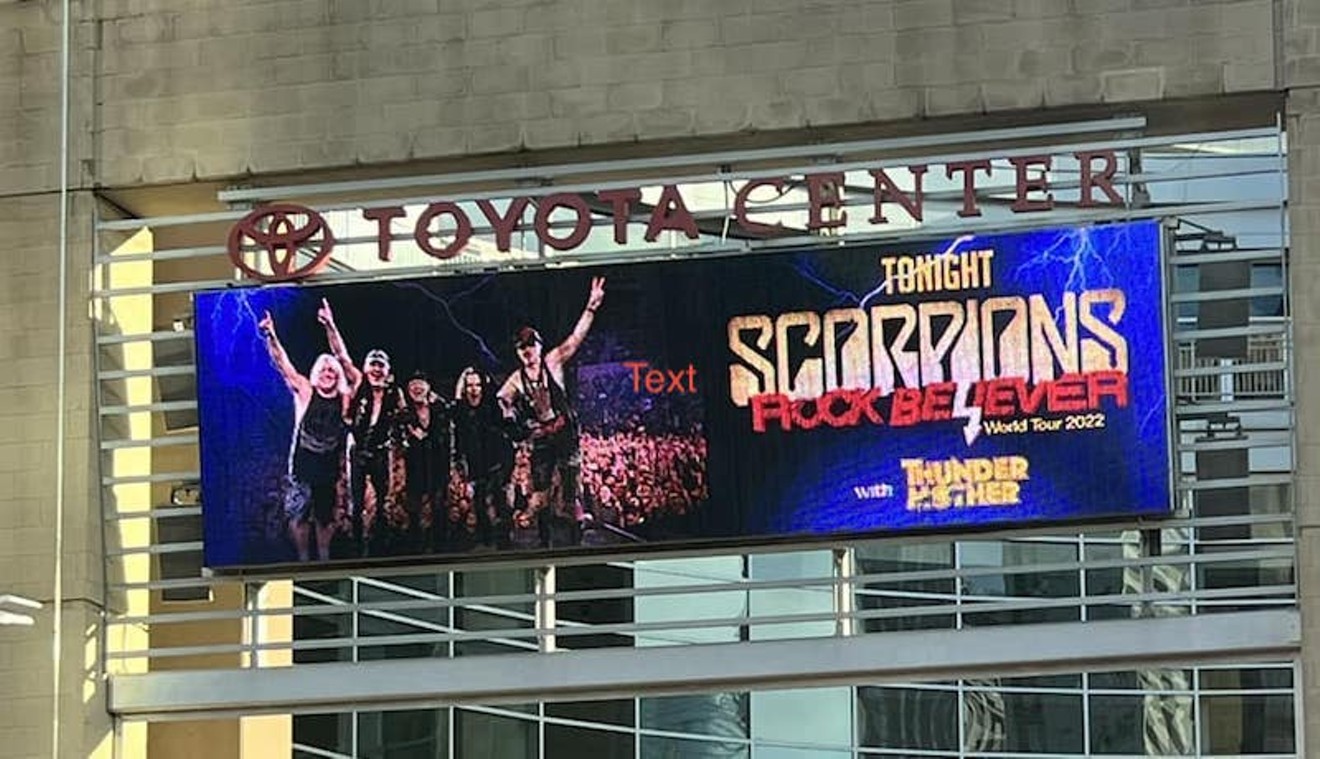 As long as you think Scorpions have been around, it's probably longer than that. Founded in 1965 by guitarist Rudolf Schenker as a psychedelic-adjacent combo. Current vocalist Klaus Meine joined in 1970, and — after a brief breakup (and the departure of Schenker's brother Michael for UFO) — the band regrouped in the mid-1970s, honing their signature sound and eventually ascending the heights of hard rock royalty.

Though they may have been more notorious during their early period for the albums covers for Animal Magnetism, Lovedrive, and Virgin Killer (don't Google that last one at work), band members still claim the record company was behind those, which seems disingenuous until you see them live. For it's in a concert setting that Scorpions' cartoonish machismo and earnest need to please combine into ... whatever the German equivalent of spicy jambalaya is. Sauerkraut soup, maybe.

Last night was the Houston stop of Scorpions' Rock Believer tour, celebrating their 19th studio album and the band's 57th anniversary as an ensemble. You know, it's not often that you get to hang out with your granddads. And that's basically what a Scorpions concert is, provided your grandfathers are still prone to dressing in black leather and throwing guitar picks at their offspring.

The latest album made up a good chunk of the band's setlist, kicking off with opening track "Gas in the Tank." It got the crowd off their seats, as could probably be expected. The title cut wouldn't make an appearance until near the end of the set, but by then the band had expertly bludgeoned the Toyota Center crowd into submission.

Meine remarked, "It's been a long time, great to be back" to Houston, which ... look, I love his stubborn lack of English comprehension as much as anybody, but let's not kid ourselves into thinking that wasn't a generic salutation from the septuagenerian singer.

That's right: Meine (and Schenker) are both 74, and guitarist Matthias Jabs is a mere 66. By contrast, current bass player Paweł Mąciwoda and drummer Mikkey Dee (formerly of Motorhead and Helloween) are the babies of the group, at 55 and 58 years of age, respectively.

So I'm happy to report that Meine was still in fine voice throughout the show, especially with the songs requiring maximum wailing ("Peacemaker," "Big City Nights," among others). Was he a little slower in trotting up and downstage than Schenker and Jabs? Perhaps, but Schenker is a freak. 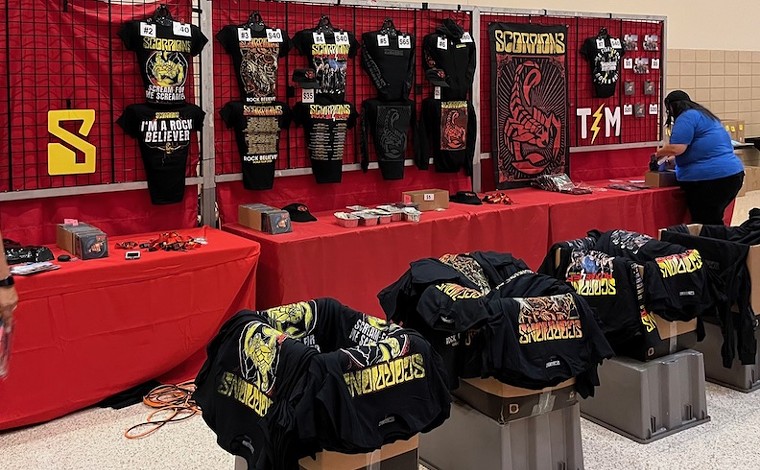 Merch you like a hurricane.
Photo by Pete Vonder Haar
The biggest reactions came for the bands early '80s heyday cuts ("No One Like You" and "Rock You Like A Hurricane" were the encores), including perhaps the band's most historically significant cut: "Wind of Change." In recognition of how the initial optimism of that song has utterly failed to pan out, Meine dedicated it to the people of Ukraine. Hey man, whatever helps.

But Scorpions gotta scorp, and going from wishing for peace in Europe straight to the unfortunate pole dancing backgrounds for "Tease Me Please Me" is pretty on-brand. It also mirrors the inappropriate lady graphics on display during "The Zoo."

Really though, this was a show for multiple audiences: classic rock devotees wishing to say a last farewell to their Teutonic compadres, old rocker dudes, and those last adherents of glasnost. At least “New Vision” allowed the new kids Mąciwoda and Dee a chance to strut their stuff while giving Schenke, Meine, and Jabs a breather before the final push.

But even for old dudes, Scorpions delivered. One of my favorite parts of the show was how Meine held the mic stand out to the crowd to sing — not because he was out of breath or otherwise indisposed (*cough* Vince Neil *cough*), but because "there's no one like Houston, Texas."

Thundermother drops the bomb.
Photo by Pete Vonder Haar
Yes, it's cheesy. Give them a break, they're German.

What About The Opener? THUNDERMOTHER (their name autocorrects to all-caps) brought the thunder, you mothers. Equal parts Vixen and Joan Jett, they were pretty damn great.
Personal Bias:

The Crowd: Enthusiastic, but also secretly gratified the show wrapped up before 10 o'clock.

Overheard In The Crowd: "Schenker is 74 years old! And he's jacked!"

Random Notebook Dump: "Is that a Mercedes Flying V?"

ENCORE
No One Like You
Rock You Like a Hurricane
KEEP THE HOUSTON PRESS FREE... Since we started the Houston Press, it has been defined as the free, independent voice of Houston, and we'd like to keep it that way. With local media under siege, it's more important than ever for us to rally support behind funding our local journalism. You can help by participating in our "I Support" program, allowing us to keep offering readers access to our incisive coverage of local news, food and culture with no paywalls.
Make a one-time donation today for as little as $1.