When doomsday goes down and you’re looking for heroes, who you gonna call? Ghostbusters? The police? The government? The government totally sucks, you motherfuckers!

The world could do much worse than turning to the Devil-battle-tested, Holy Grail of guitar picks-seeking, face-melters known as Tenacious D. That’s sort of the point of the band’s latest film/YouTube series, Tenacious D in Post-Apocalypto. The band is touring in support of the animated film and its music and made a stop at Revention Music Center last night. Right from the beginning, those in the near capacity crowd left little doubt they’d trust their end time fates to “The D.”

Jack Black and Kyle Gass have earned that trust over 25 years of performing together as Tenacious D, a quarter century of highlights like an HBO series that introduced the world to its brand of comedic but serious rock and roll, serious enough to earn a Grammy for Best Metal Performance. They’ve toured world over on their engaging and hilarious (albeit sophomoric) music and stage show. Tellingly, they survived Tenacious D in The Pick of Destiny.

So, they’ve got “The Metal” and the mettle, which is the plot (if there really is one) to Post-Apocalypto, which was featured in the first half of last night’s Revention show. A massive curtain served as an IMAX-sized screen for the Cliff Notes version of the film, condensed from over an hour to a brisk 40 minutes. The crowd cheered wildly once the set started with the film’s cartoonish animation – all hand-drawn by Black – and the cheering intensified once Black’s and Gass’s respective rotund silhouettes appeared against the screen. 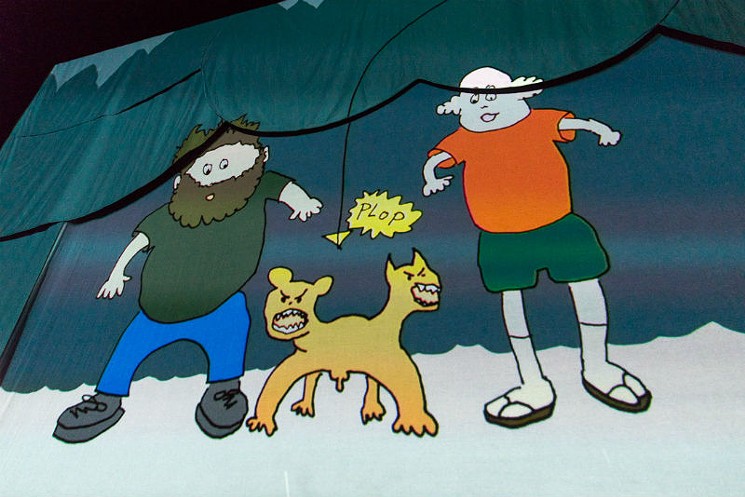 Our animated heroes and their dog, Hope
Photo by Jennifer Lake

It’s beyond this writer’s capacities to describe the story line in Post-Apocalypto, so you’ll just have to venture over to Tenacious D’s YouTube channel for a peek. It’s there for any and everyone interested to enjoy for free. A few characters from the film can be mentioned to urge (or dissuade) you. There’s a three-headed dog named Hope who is lost in an especially low part of the film. There’s a robot from the future who sings a touching ballad. The robot is named “Terminator.” There’s a revenge seeking creature dubbed “Daddy Ding Dong” and a badass clan of cave women who blame the apocalypse on men and their “obsession with penises.” It’s true, you’ll see more (animated) penises at a Tenacious D concert than you’ll see in the post game locker rooms of every Major League Baseball team combined (our way to sneak in a critical “Go Astros!” ahead of tonight’s ALCS game – Go Astros!).

The songs from the movie are standard definition Tenacious D, done in high-res at the live show. Some musical highlights from this part of the show included Black hitting the familiar metal high notes at the close of the song “ROBOT” and Gass singing the never-before-uttered words “fuck Yo-Yo Ma” during the song “FUCK YO-YO MA.” In short, you’d love the new songs if you also love the old stuff.

The old stuff was packaged into a “greatest hits” second part of the show and included many fun moments. Gass played the recorder on “COLORS” in the first half of the set, so Black one-upped him by playing whatever you’d call the instrument he brandished for “Sax-a-Boom.” He turned Revention into a dance party and admonished a single audience member who was not dancing by threatening to not return to the usual metal antics until everyone danced. There was a technical issue with Black’s microphone right before “Roadie,” which must not have been scripted if Black’s reaction was any indication. He called the moment “too comical” and, with a working mike in hand, launched into the paean to musical road staff everywhere. In fact, the entire Tenacious D crew got noticed at the end of the night, during the song “Double Team.” Each musician took a solo (Black’s was a vocal solo which included lines from Steely Dan’s ‘Hey Nineteen.’) The roadies were introduced and took a bow. The band’s security and sound engineers got a shout out. Even Dan, in charge of the stage lighting, got a solo. The lights dimmed and Dan went to work like Hendrix in his prime. 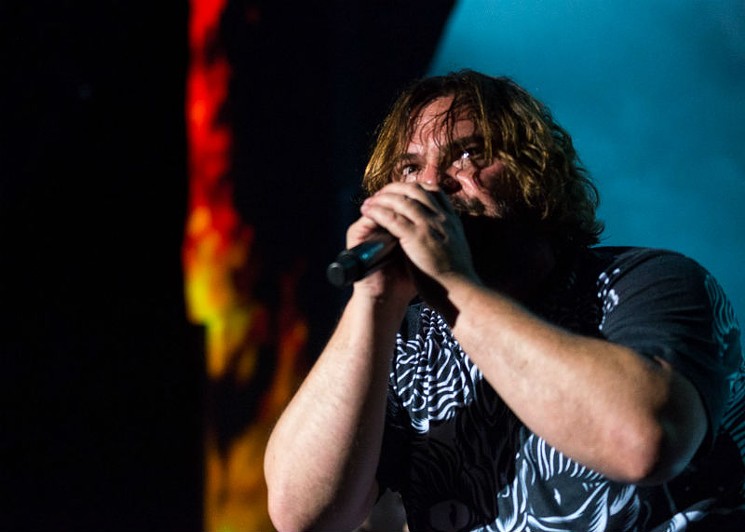 By then, the audience had heard plenty of favorites like “Tribute” and “Kickapoo” and was ready for its big sing-along. The crowd lifted its voice in unison for night-closer “Fuck Her Gently.” They sang as sweetly and as unified as those people in that Coca Cola ad about teaching the world to sing. It’s all rather silly, but if you think about the end of the world, who would you rather follow into the abyss? Some boring, self-important action hero or two dudes who shred guitar and can make you laugh effortlessly? We’ll take our chances with “Jables” and “Kage.”

The Opener: Wynchester started the fun promptly at 8 p.m. with an acoustic guitar instrumental throwdown. The band is a country duo with comedic undertones and is made up of Tenacious D guitarist extraordinaire John Konesky and lead vocalist Mike Bray from the Kyle Gass Band. They set the tone with opener “The Gospel of Good Times” and included some clever lyrical work atop their deft guitar pickin’. In “Two Man Job,” Bray attempts to convince a cheating heart that he’s man enough for her needs by likening himself to “a Swiss Army Knife of love.” The duo worked in some interesting covers, like Dio’s “Rainbow in the Dark” and a bluegrass rendition of Commodores’ “Easy.” They described themselves as a salad, there to prepare palates for the main course, and the crowd's response suggested they were a welcomed appetizer.

Personal Bias: If you even have a faint hint that you might spit beer out when laughing during a humorous show, don’t drink beer during the humorous show. My sincere apologies to the fellow who got sprayed by my craft brew mouthwash during the Post-Apocalypto “Cave” section of the show. 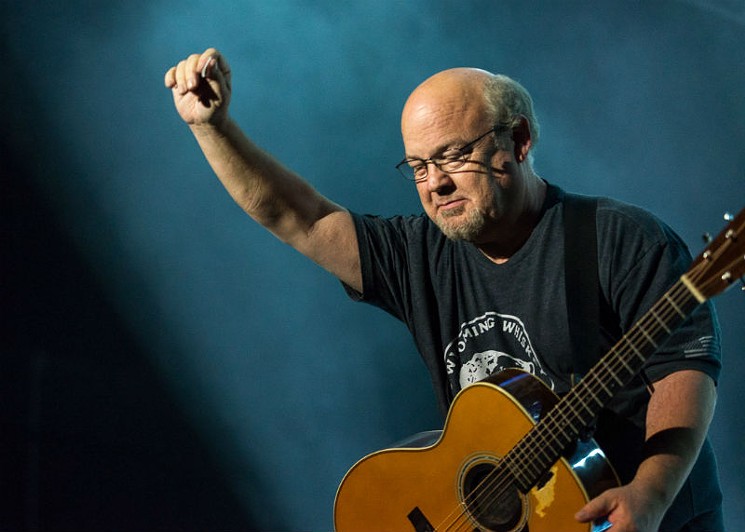 
The Crowd: Cheered heartily when the KKK, Nazis and Donald Trump Jr. were eradicated by the Terminator, so, you know, socially conscious. Also The Crowd: Bounced an inflatable penis around the auditorium for a solid five minutes during the show.

Random Notebook Dump: Shout out to the extra-dedicated smokers of Revention. Indoors, streams from vapes filled the air, as did the sweet smell of the sticky icky (so wonderful that you can still catch a whiff of marijuana at a rock concert, imo). Also, to all who gathered in a cloudy tobacco haze on the front porch of the venue to fill their lungs with Camel and Spirits smoke, props to you all, especially our new friends Cory and Jim , with whom we shared a few drags with between sets. Good luck Jim in your future adventures in Colorado, very happy to know Houston felt like home, if only for a little while. Cory, we’ll see you soon at a show.

TAKE US INTO SPACE 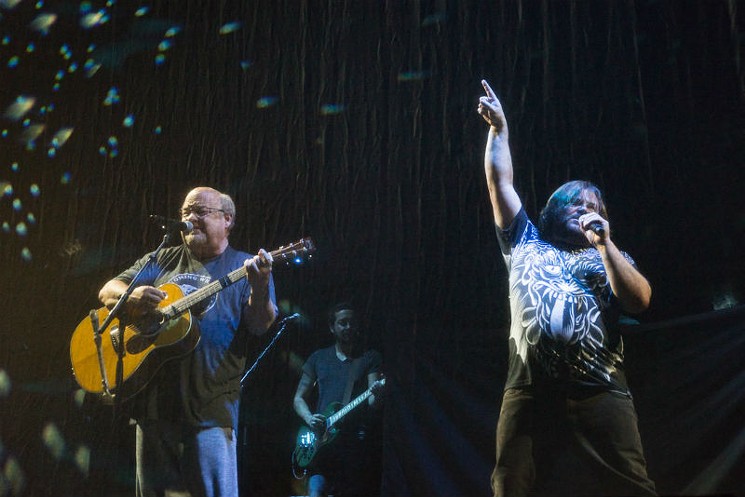 "The D"
Photo by Jennifer Lake

Rize of the Fenix

Dude (I Totally Miss You)

Fuck Her Gently
KEEP THE HOUSTON PRESS FREE... Since we started the Houston Press, it has been defined as the free, independent voice of Houston, and we'd like to keep it that way. With local media under siege, it's more important than ever for us to rally support behind funding our local journalism. You can help by participating in our "I Support" program, allowing us to keep offering readers access to our incisive coverage of local news, food and culture with no paywalls.
Make a one-time donation today for as little as $1.