The Distillers Brings a Vampire Circus to Houston 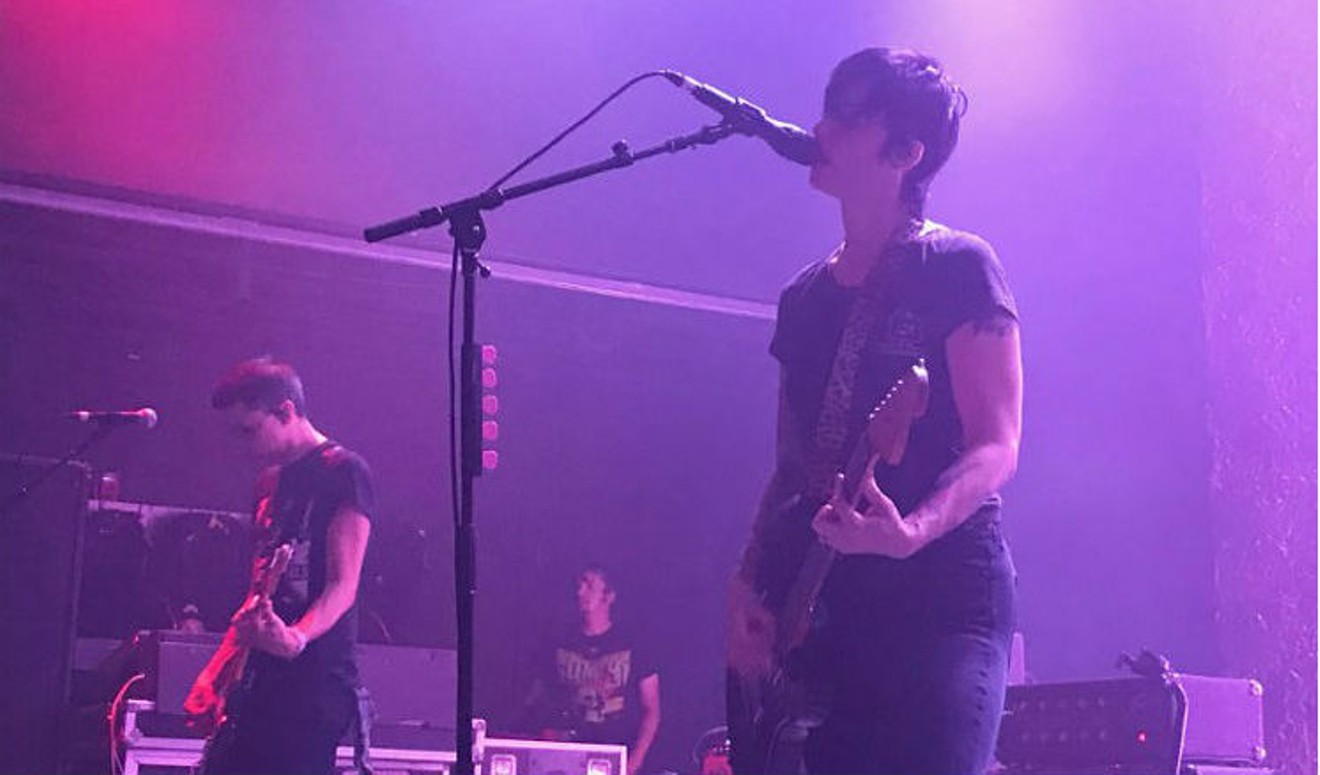 The Distillers Photo by Jesse Sendejas Jr.
I’m no Van Helsing, but I’m pretty sure Brody Dalle and The Distillers are vampires. My hunch comes from some of the titles of the band’s biggest hits, “Coral Fang,” “I Am a Revenant” or “Drain the Blood,” for example. While the veteran California punk band didn’t literally drain the blood of last night’s adoring White Oak Music Hall crowd, they did drain its energy with a riveting 90-minute set.

They’re not newfangled bloodsuckers, but instead come from the Old World, all the way back from the early 2000s when they rose to prominence on three strong albums; their self-titled debut on Hellcat Records, the follow-up, Sing Sing Death House and their major label release Coral Fang. By 2006, the band was done, its members off to chase down prey in projects like Spinnerette and Angels & Airwaves. Last year, the band’s hiatus ended suddenly. It released a new single, “Man vs. Magnet,” which was in last night’s 20-song set list and was well-received by the audience, which packed White Oak’s main room.

Fans waited a long time to hear favorites like “Hall of Mirrors,” “Beat Your Heart Out,” and “City of Angels.” Lots of Houston’s punk elite were in attendance and most said they’d never seen Distillers live and couldn’t recall the band’s last trek through Houston. When touring resumed last year, El Paso, Austin and Dallas got shows, but locals had to wait through other tour dates and injuries and illnesses the band braved to ultimately see them live. Researching the subject, it seems the Distillers' last run through the Bayou City was a December 2003 gig at the Engine Room.

A lot has changed in 16 years and it's evident that Dalle, the band’s front woman, has affected a generation of musicians who followed her. Songs like “Oh Serena” and “Seneca Falls” sound even stronger in the Me Too era and Dalle’s example as a rock and roll survivor is sure to benefit new artists like show-openers Death Valley Girls (more on them in a bit) and Billie Eilish, whose “All the Good Girls Go to Hell” was recently mashed-up with “Drain the Blood.” In a Tweet, Dalle approved the mix and claimed she’s an Eilish fan.

At last night’s set, Dalle cut an imposing figure, surrounded by longtime Distillers, bassist Ryan Sinn, guitarist Tony Bevilacqua and drummer Andy Granelli. Like Dracula, she lured listeners in with a husky voice that sounded as if it was prepped for the show with a fresh plasma gargle. The mesmerized were then attacked with the crunch of the guitar and banshee-like wailing. And the crowd loved it. They loved “Man vs. Magnet” because it sounded like their youth, which is to say it sounded like Distillers in their prime. They loved and sang along to “Gypsy Rose Lee,” all the while in wonderment that they’d ever hear that song performed live by the band.

Brody Dalle is a woman of few words. She tossed out a few hey Houstons and good to be back Houstons like so many used guitar picks. But the crowd wasn’t on hand for motivational speaking. They came for motivational music and inspiring moments and got them with the slowed-down “The Gallow is God” and by chanting "olé, olé, olé" at Dalles’s request.

To turn this belabored vampiric motif on its head, the crowd devoured it all greedily. The fervor for songs they’d waited ages to hear felt like that opening scene of the film Blade, where the nightclub full of bloodsuckers goes berserk when it's covered in blood. That frenzy was especially reserved for “Seneca Falls,” “City of Angels,” “The Young Crazed Peeling” and show-closers “The Hunger” and “Drain the Blood.” But, to hear many who chimed in on social media following the set, the desire was also propelled by being taken back to a time long ago when they were young and hearing the band in its first life. The nostalgia alone would have carried Distillers’ last night, but having risen from the dead and seeming deadlier than ever made the show an indisputable success.

The Openers: It’s Halloween season and keeping with the spoopy theme here, Death Valley Girls were bewitching in their opening set. Their influences are creeps like Black Sabbath and the Cramps and lead vocalist Bonnie Bloomgarden twirled in a black-as-night dress like Stevie Nicks’ dark alter ego. Its hard to pin down the band’s sound, but garage punk seems like the best, in-a-box description, with guitarist Larry Schemel doing inspired work throughout the band's 40-minute jaunt. Songs like “Disco” and “I’m a Man, Too” provoked more dancing than one is likely to see at an Ozzy concert and there were times when Bloomgarden seemed to be channeling Lene Lovich like a weird medium. It was all lots of fun. As Bloomgarden told the crowd, 40,000 thoughts go through our heads daily. Giving any of them over to a good time is never a bad thing.

Personal Bias: Although I am old enough to have seen the Ramones live on their first-ever tour, as dedicated readers (any of you out there?) know, I was a disco king back in the 1970s and missed punk’s whole first wave due to boogie-oogey-oogeying. When my son started paying attention to punk rock by playing all those Tony Hawk Pro Skater games, “Seneca Falls” was one of the favorites, from THPS 4. Now that he’s off doing his own punk music, I believe those games were as influential to a generation of listeners as the Beatles were, to rip-off a popular Reddit stream.

Random Notebook Dump: If you ever attend a Houston punk show and wanna know if you’re in the right place, you probably are if Cristina Frost is there. There were lots of regulars from H-town’s close knit punk community on hand last night, so it was no surprise seeing Frost’s friendly face. She’s been in drunken mosh pits with us at house shows and seen some of punk’s biggest touring acts alongside us, so when she’s in attendance we know we’ve chosen punk entertainment suited for one of the genre’s biggest Houston fans.
KEEP THE HOUSTON PRESS FREE... Since we started the Houston Press, it has been defined as the free, independent voice of Houston, and we'd like to keep it that way. With local media under siege, it's more important than ever for us to rally support behind funding our local journalism. You can help by participating in our "I Support" program, allowing us to keep offering readers access to our incisive coverage of local news, food and culture with no paywalls.
Make a one-time donation today for as little as $1.