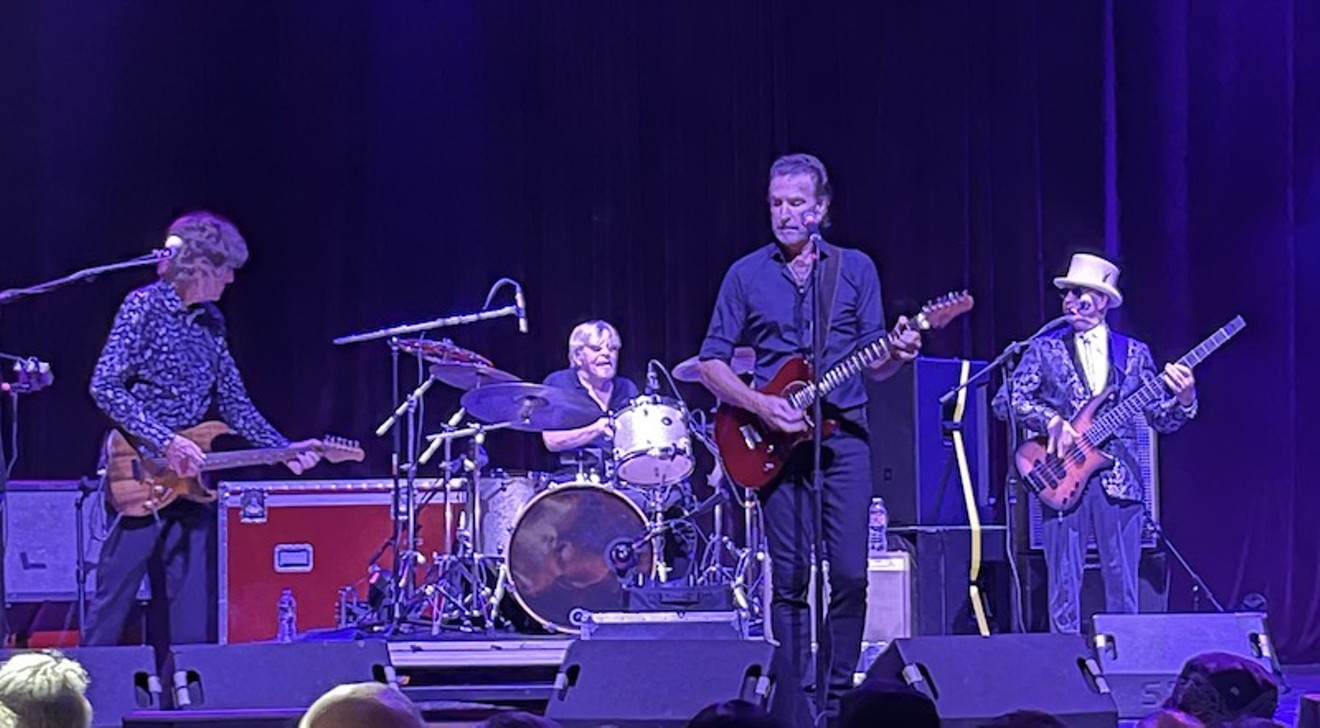 No red skies in sight. Photo by Pete Vonder Haar
The Fixx
House of Blues
September 1, 2022

You remember the Fixx.

It's not a question. Though perhaps never as high profile as their contemporaries, the band's music formed as much of the soundtrack to the 1980s as anyone's, with songs like "Saved By Zero," "One Thing Leads To Another," and "Are We Ourselves?" getting a decent portion of MTV's rotation not devoted to Madonna and Michael Jackson.

Singer Cy Curnin, drummer Adam Woods and keyboardist Rupert Greenall have been the core of the band since the beginning, joined by venerable guitarist Jamie West-Oram way back in 1980 and bassist Dan K. Brown after a decade or so hiatus.

Brown and Greenall are the two wearing hats, if that helps.

Every Five Seconds is the Fixx's first album in ten years, and — as befitting its status — formed the core of the band's setlist last night during a comfortably full House of Blues appearance. The opening song, "A LIfe Survived," suffered from PA issues, but follow-up "Closer" kicked an appropriate amount of ass with its timely references to "smart dumb phones" and technological alienation.

"Driven Out" came next, making an early appearance in what was perhaps an ironic acknowledgment that it might be one of the most recent song the audience would recognize (from 1989's Calm Animals). Fortunately, it's still a certified banger.

Curnin, clad in black jeans and a dark button-down, is one of those ageless rock dudes. Like a new wave Robin Zander (though perhaps more awkward) he led the crowd in singalongs and powered through some of the set's more experimental cuts ("Beautiful Friction," "Chase the Fire") before getting to the better-known cuts.

Because let's be honest, the Fixx's experimental sound always threatened to be hit and miss, especially with a Houston crowd more interested in bleating about the last time they saw them open for the Spin Doctors (or whoever, guy in the Hawaiian shirt behind me).

The Fixx is in.
Photo by Pete Vonder Haar
As for the hits, there were plenty to come. "How Much Is Enough?" made an early appearance, with Curnin lamenting that, more than ever, "the middle of the road is a fucking lonely place to be." That was soon followed by "Less Cities, More Moving People," which yours truly was gratified to see he wasn't the only fan of.

Meanwhile, "Are We Ourselves" (one of only two tracks from the underrated Phantoms) honestly felt like the first time West-Oram's guitar was working properly, because it rang out much more distinctly from that point on, especially during the solo to "Deeper and Deeper," which helped distract from whatever personal shit Curnin was going through during the song.

Cheap (Trick) rock star comparisons aside, it seemed like Curnin really wanted to connect with his audience. His is one of the more distinctive voices in new wave, and he exercised it quite a bit when emphasizing the need for human connection in songs like "Are We Ourselves?"

And lest any of you forget the impact of the Fixx, the final main set triptych consisted of "One Thing Leads to Another," "Stand or Fall," and "Red Skies," any of which are all-timers in the pantheon of Reagan era tuneage. And that's not even getting to the encore, which included "Saved By Zero" and "Secret Separation."

The Fixx remind me of Sid Hudgens's line about Pierce Patchett in L.A. Confidential: they ain't GenX nostalgia and they ain't current pop stars, but last night at the House of Blues they reminded us why their relevance shouldn't be questioned.

Personal Bias: The Fixx were always low-key one of my favorite bands, '80s or otherwise.

The Crowd: Lots of bald guys in glasses singing along with the Tears for Fears bumper music.

Overheard In The Crowd: "Oh yeah, I'm kind of a Fixx fanatic," said by a guy who went on to list two of their biggest hits then smile politely while his date (?) rattled off a dozen deep cuts from their '90s albums.

Random Notebook Dump: "How am I just now noticing that pantheistic HOB bullshit above the stage?"

SETLIST
A Life Survived
Closer
Driven Out
Chase the Fire
How Much Is Enough?
Take What You Want
Less Cities, More Moving People
Cold
Beautiful Friction
Are We Ourselves?
Deeper and Deeper
Wake Up
One Thing Leads to Another
Stand or Fall
Red Skies

ENCORE
Lonely as a Lighthouse
Saved by Zero
Secret Separation
KEEP THE HOUSTON PRESS FREE... Since we started the Houston Press, it has been defined as the free, independent voice of Houston, and we'd like to keep it that way. With local media under siege, it's more important than ever for us to rally support behind funding our local journalism. You can help by participating in our "I Support" program, allowing us to keep offering readers access to our incisive coverage of local news, food and culture with no paywalls.
Make a one-time donation today for as little as $1.