The Who Ended Its Houston Set Last Night After Eight Songs 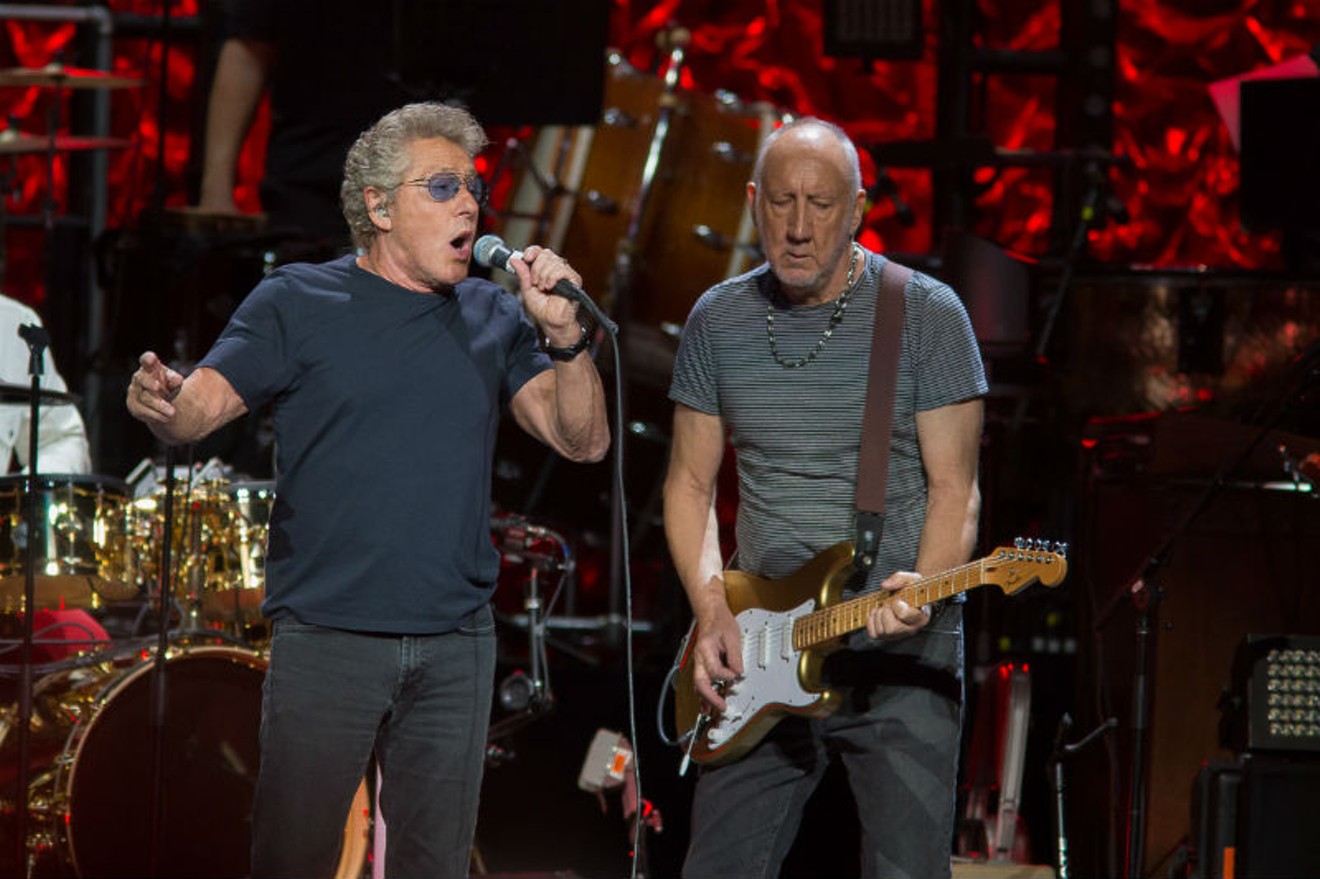 The Who Photo by Eric Sauseda

Houston’s no stranger to concert cancellations or postponements. There was a whole slate of scrapped shows just last week thanks to our ongoing struggle with tropical rainstorms. And, any time Morrissey is on the bill, one must prepare a plan B for the evening.

When a show ends after it’s already begun and seems to be going pretty well, it’s a weird thing. The sort of weird thing that happened to Houston music fans last night at Toyota Center, fans who gathered for classic rock giants The Who. Less than an hour into the set, the band’s legendary vocalist Roger Daltrey called it a night. He was unable to sing thanks to ragweed allergies. So, it’s not just torrential downpours which affect shows here, friends, it’s also our uncontrollable pollen count.

Daltrey and Pete Townshend took the stage around 8:30 p.m., the last to arrive after a 50-piece backing orchestra and supporting players like drummer Zak Starkey (Ringo Starr’s son and a Keith Moon disciple) and guitarist Simon Townshend (Pete’s younger brother) took their places. Somewhere in time, the duo wore ruffled shirts and Matador boots, but they dress for comfort these days, in jeans and T-shirts and they seemed relaxed and ready to go.

“I wanna warn you, it’s a slow start,” Townshend quipped, and they were off, into the Tommy section of the set, which began with the rock opera’s overture and folded into “1921,” “Amazing Journey,” and “Sparks.” By the time they reached “Pinball Wizard,” Daltrey was thrilling the audience with familiar microphone twirls and Townshend had broken out his famous power move, the windmill.

Daltrey was in good form until he wasn't.
Photo by Eric Sauseda

Things seemed to be going well until “Who Are You,” the seventh song in the set. At the start of that crowd favorite, Daltrey missed a few lines and Townshend jumped in while Daltrey gathered himself. When it ended, the audience heard Daltrey bemoaning a trip to Houston during ragweed season and Townshend urged the crowd to rally behind The Who’s singer. Townshend sings lead on “Eminence Front,” the next song in the set, so Daltrey had time to assess his situation. Once the song ended, he’d advised his bandmates and the audience he couldn’t continue performing. Townshend followed him offstage and a few minutes later returned to tell fans the show was over and offer apologies.

He told the crowd they wanted to press on, but “this is Roger’s show, this is Roger’s vocal show” and there was no moving on without him. Even as he swore the band would reschedule and urged fans to hang onto their tickets or to call Live Nation with concerns, cheers and applause arose. Townshend had just encouraged the audience to support Daltrey. They showed support and a lot of class by rallying behind Townshend as he delivered the rough news of a show postponement. The show ended about 45 minutes from its promising start.

The Opener: Reignwolf offered a trickling-in crowd some serviceable blues rock. According to my man “Classic Rock Bob” Ruggiero, they’ve supported some diverse and legendary acts, like Black Sabbath and Wu-Tang Clan, so they were up to the occasion of preparing fans for The Who. The songs sounded familiar but not necessarily stunning from our distant seats. The band deserves a listen on a stereo, with the volume jacked to the max, since Toyota Center seemed to swallow some of its sound.

Personal Bias: “Baba O’Riley,” which remains in a teenage wasteland of classic rock songs I’ve not yet heard live. According to the posted set lists from the previous tour dates, it’s the show closer and was a long way off when The Who called it a night. It’s even further away now, but like every other fan who’s hopeful for a rescheduled date, I’m rooting for Daltrey’s quick recovery and am certain I’ll hear this one someday soon.

The Crowd: When the set abruptly ended, you might think at least one drunk fan would have booed. Didn’t hear any boos or catcalls, though there was a lot of concerned confusion. With sudden free time on their hands, they left their seats and lined up for T-shirts and coffee mugs at the merch table.

Overheard in the Crowd: We channeled our inner Billy Eichner to do a little “man on the street” reporting after the show and got takes on the evening’s events from some Who fans.

“They did well up until that point,” said Alex, who was game-planning his next move with friends when we approached. “I thought it was a WWE chapter where they’re staging some B.S. It just sounded real fake. I’m like, ‘What?! They can’t do that,’ and then I saw the orchestra get up.”

We asked Alex if he’d ever seen The Who before and he said, “Negative. Not since Woodstock,” which evoked a round of raucous laughter from his young friends.

We caught up with Edward and Maria, who have seen The Who before, as recently as last month in Maria’s case. They expressed some doubts, which don’t seem far-fetched given the sometimes rocky relationship between Daltrey and Townshend.

“I guess he was having a little difficulty breathing and he made a comment about that. And then Pete Townshend made a comment about, ‘Well, folks, I don’t think it’s a big deal,’” Edward said. “He wasn’t specific about what he was talking about and it sounded to me like Roger Daltrey got pissed off after he said that.”

“We don’t know,” Maria intervened, but added “Here’s the thing, you can’t get contentious at this point and start a fight that ends a tour. You have so much into the tour planning, the tour merchandise, all the promises that you made to the venues, to the advertisers, to Live Nation, to Ticketmaster, to AXS, to whatever it is. He would crucify himself as a human at this point if it proves to be anything other than health.

“He may have just thrown a temper tantrum, he may have thought he didn’t sound good and that was the end of the night,” she suggested.

Random Notebook Dump: Shouts out to Allison and Cory Garcia, who sat next to us and tried to help us wrap our heads around the show’s swift end. Be looking for Cory’s assessment of it all today online, fellow readers. And a final shoutout to Brian and Tim, two mega-fans of The Who, who we met at Dirt Bar before the show. It was Brian’s fifth time to see the band and Tim’s third. Once, at a show in Pittsburgh, Brian held a sign asking Townshend for a guitar pick and the Rock and Roll Hall of Fame guitarist threw picks at him until he nabbed one. They were understanding but disappointed about last night’s show and just chalk it up a la Forrest Gump. When you see The Who, you never know what you’re gonna get.
KEEP THE HOUSTON PRESS FREE... Since we started the Houston Press, it has been defined as the free, independent voice of Houston, and we'd like to keep it that way. With local media under siege, it's more important than ever for us to rally support behind funding our local journalism. You can help by participating in our "I Support" program, allowing us to keep offering readers access to our incisive coverage of local news, food and culture with no paywalls.
Make a one-time donation today for as little as $1.