Given two and half hours of stage time, most bands could play a few dozen songs. But not Tool.

Everyone knew an encore was coming — as evidenced by a countdown that emerged onscreen — but a cursory glance at the evening's set list might have left the average concertgoer feeling swindled.

For better or worse, Tool is a band that takes patience. The iconic-prog rockers don't write short songs, and many of their hypnotic, ominous outings are best appreciated after multiple listens. Which can serve as a rich experience for ardent fans and as a frustrating roadblock for anyone trying to figure them out.

But in every track - from the 11-minute opener "Fear Inoculum" to the charmingly titled "Hooker With A Penis" — there were moments on Friday when even the most casual fan had an opportunity to appreciate what Tool does so well. From the the group's musicianship to their set design and artwork — never mind the rabid fanbase — there was plenty of entertainment to be had, even if the set list seemed thin at first glance.

On the road for the first time since the COVID-19 pandemic delayed their last tour, Tool's visit to Houston was the 15th stop on a 54-date tour spanning across the United States and into Europe. The band hasn't released any new material since, but the crowd's collective energy on Friday was as high as it was two years ago when Fear Inoculum — their first record in 13 years — had just come out. 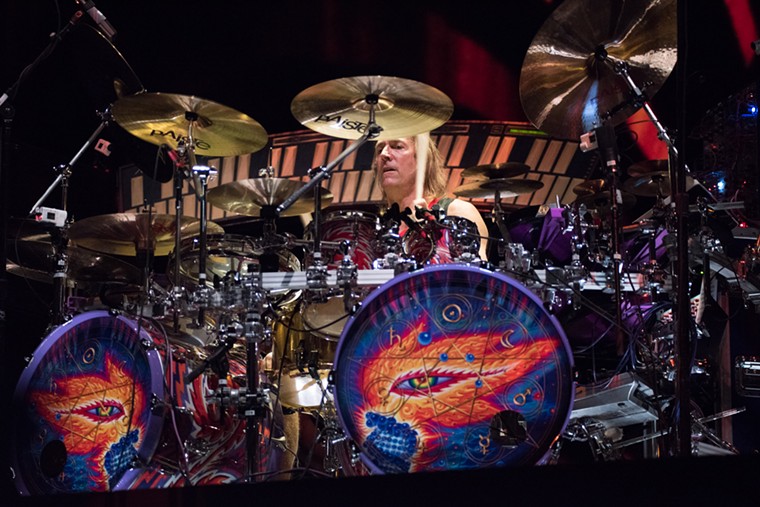 Danny Carey
Photo by Jack Gorman
Keenan kept a low profile for most of the show, sticking to the shadows while Carey and his drum kit held center stage, flanked by Jones and Chancellor. Keenan's voice was nearly drowned out by more than 18,000 screaming fans singing along to the likes of "Sober," "The Pot" and "The Grudge," but his band mates' instruments couldn't be muzzled.

Ten songs may not seem like much, but it's a different story when those songs feature multiple time signatures and range from five to 12 minutes in length. And when the encore finally came, fans were treated to an extended drum solo from Carey before confetti was released from the rafters during an intimate performance of "Culling Voices" and an energetic rendition of "Invincible."

So yes, Tool takes patience. This is, after all, an outfit that has only released five studio albums since 1993. But patience eventually pays off. And as Keenan himself sang in "The Patient," "If there were no rewards to reap, no loving embrace to see me through this tedious path I've chosen here, I certainly would've walked away by now."

ENCORE
Culling Voices
Invincible
KEEP THE HOUSTON PRESS FREE... Since we started the Houston Press, it has been defined as the free, independent voice of Houston, and we'd like to keep it that way. With local media under siege, it's more important than ever for us to rally support behind funding our local journalism. You can help by participating in our "I Support" program, allowing us to keep offering readers access to our incisive coverage of local news, food and culture with no paywalls.
Make a one-time donation today for as little as $1.