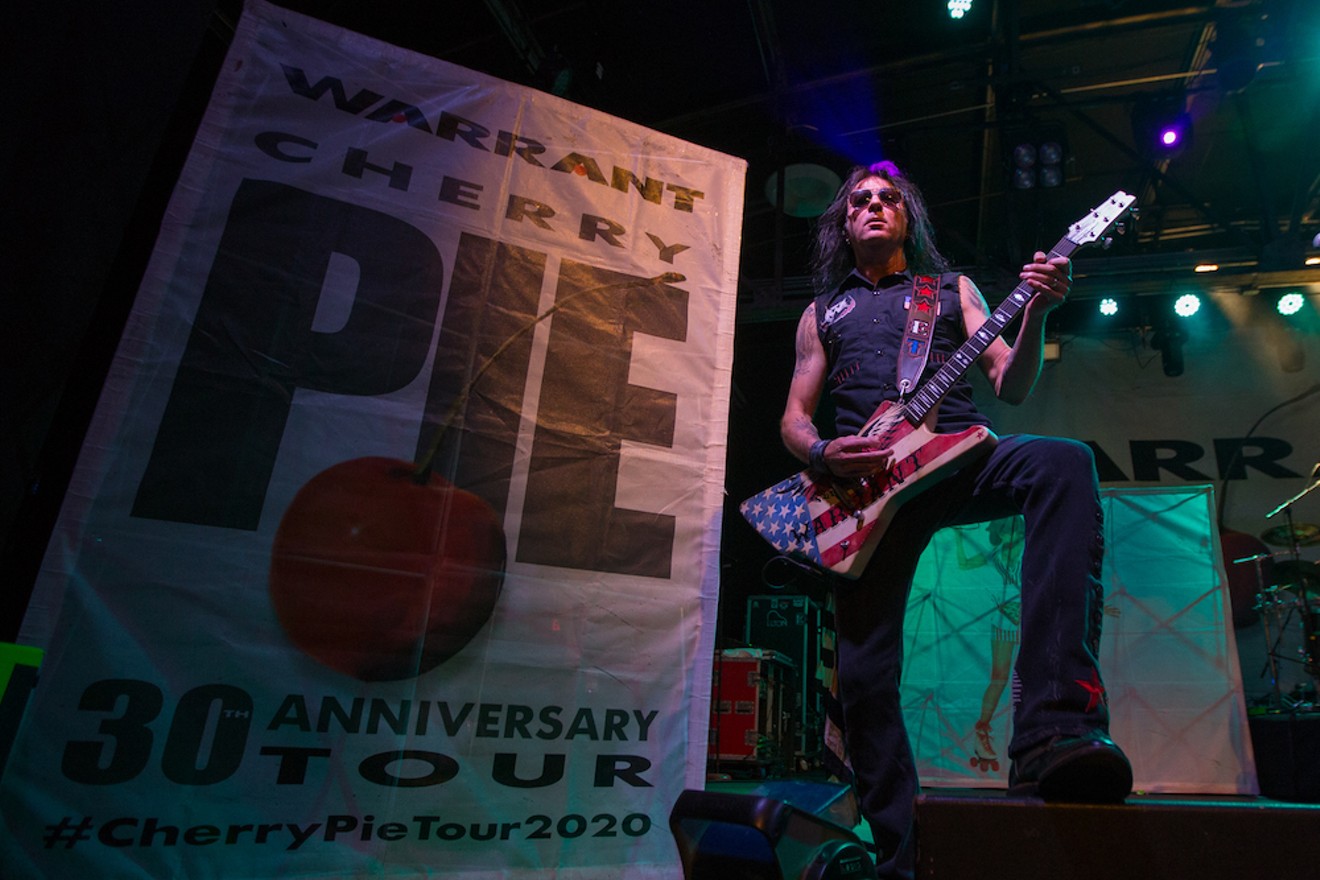 Jani Lane, Warrant's original lead singer, said in a 1995 interview with Musician magazine that he knew the writing was on the wall for hair metal when he saw a huge poster for Alice in Chains' Dirt hanging in the office of the president of Columbia Records.

Lane, who passed away in 2011, never lived to see that nothing's ever *really* over when it comes to music. Disco never died, after all, and while hair/glam metal may have fallen out of favor for a time, as long as there are fans with disposable income, those spandex and Aqua Net dreams will live on a little longer.

Robert Mason, the band's current singer (since 2008), said as much Friday night, crediting the band's fans for carrying them through years of grunge and pandemic and coming out on the other side. Warrant and everyone associated with the 30th anniversary of the band's release of Cherry Pie enjoyed a great deal of post-COVID goodwill, some of it more "warranted" than others.

Warrant  headlined a triple-bill including Lita Ford and BulletBoys, with the whole shebang perfunctorily hosted by Eddie Trunk of SiriusXM and That Metal Show fame. It was clearly an attempt to leverage each group's '80s glam bona fides, but if we're talking pedigree, Lita Ford stands alone. And I'd say that even if she hadn't called Houston one of her favorite places. 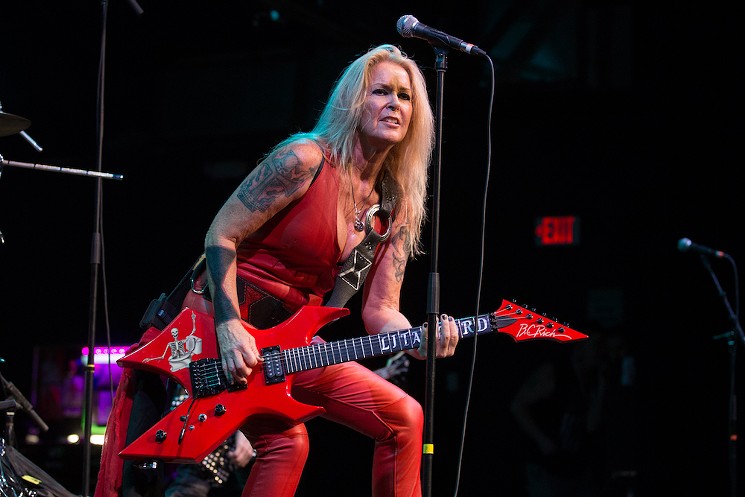 Disney is missing out on this Black Widow cross-marketing opportunity.
Photo by Eric Sauseda
A member of the legendary Runaways alongside Joan Jett and Cherie Curie, Ford was likely best known to last night's crowd as the artist behind such '80s glam metal hits as "Kiss Me Deadly" and "Close My Eyes Forever," her duet with Ozzy Osborne. And the sheer tonnage of phones produced to record said songs would appear to bear that out. Regardless (and disregarding some early vocal mix issues), she brought the house down.

That goodwill carried over to Warrant, who wisely rocketed through their set with a minimum of navel gazing or banter. Mason said he didn't want to talk too much, and to that end he led the band through an efficient (and almost reverse chronological performance) of their best-selling album, plus a smattering of other hits ("Sometimes She Cries," "Machine Gun").

And they were fine, really. Warrant's core team — Joey Allen (guitar), Erik Turner (guitar), Jerry Dixon (bass), Steven Sweet (drums) — know the drill by now. If there was a technical complaint to be made, it's that Mason, a more blues-rock style vocalist, doesn't sound a hell of a lot like Jani Lane.

It brings up a different issue. By all accounts, a lot of Lane's depression could be chalked up to his being identified as "the 'Cherry Pie' guy." It weighed on him that the song became the band's signature instead of "Uncle Tom's Cabin," and I have to wonder how he would've handled a stage festooned with banners blaring the album's misogynistic artwork.

Because while some album anniversaries make sense, thanks to their lasting cultural significance, it'd normally be hard to believe anyone was nostalgic for an album widely considered the nadir of the hair band era. Last night's crowd at Warehouse Live would appear to refute that. Whether it was due to Lita Ford's pedigree, Warrant's temerity, or just getting the hell out of the house, we'll take it. 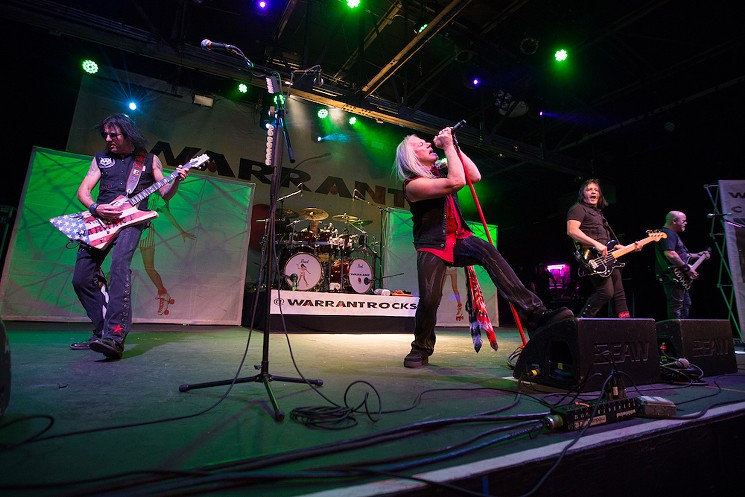 The Down Boys, circa 2021
Photo by Eric Sauseda

Personal Bias: Nobody in Warrant complained about "Cherry Pie" when they were cashing checks.

The Crowd: The Down Boys were surprisingly polite. It won't last.

Overheard In The Crowd: [when Trunk was onstage]: "Who's that guy?"

Random Notebook Dump: "Do people still give a shit about drum solos? Apparently."

LITA FORD SET LIST
Gotta Let Go
Larger Than Life
Hungry
Playin' With Fire
Can't Catch Me
Cherry Bomb
Black Leather (Sex Pistols cover)
Only Women Bleed (Alice Cooper cover)
Close My Eyes Forever
Kiss Me Deadly
KEEP THE HOUSTON PRESS FREE... Since we started the Houston Press, it has been defined as the free, independent voice of Houston, and we'd like to keep it that way. With local media under siege, it's more important than ever for us to rally support behind funding our local journalism. You can help by participating in our "I Support" program, allowing us to keep offering readers access to our incisive coverage of local news, food and culture with no paywalls.
Make a one-time donation today for as little as $1.