Unfazed by the Hype, Wet Leg Delivers a Day at the Beach

At a house party recently, a friend and I were marveling over Wet Leg, arguably the buzziest band on the planet. This was weeks ago, a good month before the band touched down at The Secret Group last night to perform another in a string of sold-out shows in the States. My friend was thrilled that the British indie rock band, which highjacked music last summer with the ridiculously infectious tune “Chaise Longue,” was headed to the intimate venue. Their sudden prominence and the excitement surrounding it reminded him of another all-time favorite band, Nirvana.

My friend wasn’t necessarily comparing the bands sonically, but he’s a Nirvana acolyte and remembers the vibe that built around the band in the weeks ahead of Nevermind and its tour and he said that’s what he sees happening with Wet Leg. Although they’re off and running, Wet Leg has yet to release its debut album. That won’t happen until April 8. A series of singles have been building the buzz, all led by the cheeky earworm “Chaise Longue.”

A moment from last night’s show represented how the band’s momentum is building: in the song, which was the final tune of an early night, vocalist/guitarist Rhian Teasdale calls and guitarist/vocalist Hester Chambers responds with “What?” several times. The audience sang along and each time the “What?” line arose they turned up the volume until finally were shouting the lyric at the top of their lungs, which brought a smile to Chambers’ face. That’s been Wet Leg’s journey in less than a year’s time, growing steadily from a murmur to a frenzy.

The live show, of course, is the place to see if the band can live up to the hype, hype driven by music periodicals like Rolling Stone which called Wet Leg’s SXSW turn last Friday the entire event’s “hottest ticket.” It's a buzz spurred by American television appearances on NBC late night shows. A Sunday night show in a small room on the heels of playing one of music’s premier gatherings made things ripe for a letdown but the gathered left happy and sated by about a dozen songs delivered in just under an hour.

Chambers (L) and Teasdale were as relaxed onstage as a day at the beach.
Photo by Jesse Sendejas Jr.

The music started right around 8 p.m. with Atlanta’s Lowertown delivering a nice half-hour of melodic, lo-fi rock to a room packed with early birds. Vocalist Olivia Osby was engaging and shared that the band was on its first-ever tour. They moved through their set of songs from 2020’s Honeycomb, Bedbug and its follow-up, The Gaping Mouth, stopping occasionally to remark on how nice the audience was. Even during it’s time, the Wet Leg hype machine was in gear. Lowertown guitarist Avsha Weinberg told the crowd, "We’ve toured with them for eight shows now I think, and they are absolutely amazing every single fucking time. You're in for a treat."

It’s the sort of thing that happens at shows all the time, the opener priming the crowd for the headliner, but even that simple, commonplace concert act felt different as applied to Wet Leg. When it was time, the band delivered a set that had the capacity crowd affirming Weinberg’s take. The show opened without a hello, how-ya-doin’-Houston, just “Being in Love,” the first of 14 songs mostly sung by Teasdale. High up the set was “Wet Dream,” the lively follow-up single to “Chaise Longue,” another wry, catchy song and one that the crowd sang along to word-for-word.

Teasdale and Chambers hail from the Isle of Wight off the south coast of England and met in college years ago and the comfort they have with one another flows out into the audience, even when the song’s lyrics pose the biting question, “What makes you think you're good enough to think about me when you're touching yourself?"

Besides a moment when Chambers and Teasdale engaged in some loosely choreographed twirls together, they reserved most of their onstage interaction for glances between each other, with Chambers posted stage right and Teasdale across the way, speaking without a word the way trusted friends do. There wasn’t a whole lot of patter with the crowd, either. The obligatory words of thanks to the crowd didn’t come until two-thirds of the way through the set when the band finished its cover of Ronan Keating’s “Life is a Rollercoaster,” a highly apropos tune that advocates riding out the adventure.

With a buzzworthy band, the fear is the moment becomes too big to handle. How would your band fare being compared to Nirvana? A good indication that Chambers and Teasdale are taking the whirlwind in stride is that they both carried bottled Corona onto the stage, taking sips between songs the way you or I would sitting on a vacation beach. A tour far from home with all sorts of high expectations is no vacation, but Wet Leg seemed relaxed on a beach of its own, toes dug firmly into the sand to remain grounded. 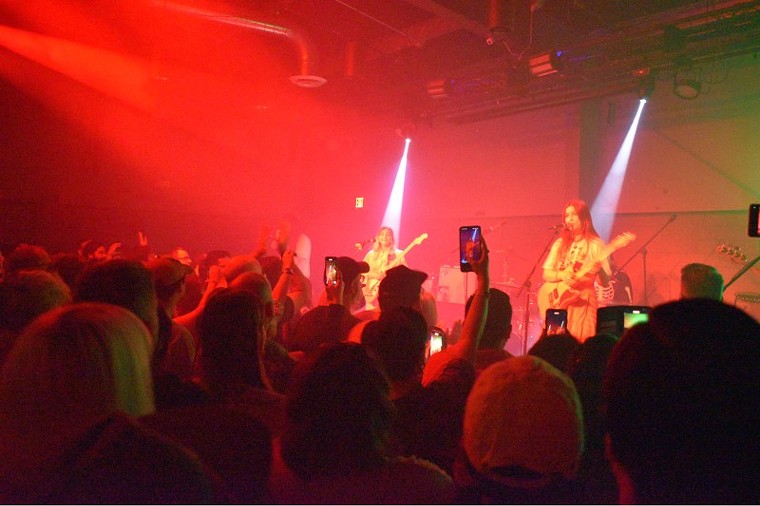 The crowd was enthusiastic and thrilled to catch Wet Leg in an intimate setting.
Photo by Jesse Sendejas Jr.

When the crowd responded with a roar midway through “Too Late Now,” Chambers shot a look over, a smile and a raised brow, something that silently indicated to Teasdale she hadn’t expected that reaction. During one song near the end of the set (“Ur Mum” maybe? Look, we don’t even have a full album yet, so sue me if it wasn’t) Teasdale let out a banshee’s cry and the crowd howled too and attempted to out-wail her as she held the note. When she exhaled, so did Chambers and the audience, a symbolic act shared by everyone who understood in that moment that there was never any worry. The hype for Wet Leg is entirely deserved and they are ready for the ride.

Personal Bias: “I went to school and I got the big D.”

The Crowd: A lot of people old enough to have seen Buffalo ’66 on its original release and a healthy dose of younger-thans who’ve Googled or rented it since it was referenced in “Wet Dream.”

Overheard in the Crowd: “I love your earrings!” shouted an audience member to Lowertown’s bassist, which prompted the band again to thank the crowd for being so nice. Good vibes and a lot of love, it was that kinda night.

Random Notebook Dump: It's been a good week to catch upstart female-fronted rock acts in Houston. Last week, we got a surprise introduction to L.A. punk act Niis (sounds like "Nice") at a Trip Six show with New Jersey ska punk vets Public Serpents. Niis was a revelation, with front woman Mimi SanDoe nearly blowing the leaky roof off the venue with energy and vocals that had Houston’s piñata-bashing young punks moshing and some old timers invoking Plasmatics and X. Wet Leg was sandwiched between them and Egg Drop Soup. That L.A. trio was featured here not long ago and returns to Houston Tuesday as part of SXSW spillover. If you're into riffs that crack craniums and nestle in the hippocampus like that one uncle  who showed up one weekend and lived in the family guestroom for two years, catch them at Continental Club.
KEEP THE HOUSTON PRESS FREE... Since we started the Houston Press, it has been defined as the free, independent voice of Houston, and we'd like to keep it that way. With local media under siege, it's more important than ever for us to rally support behind funding our local journalism. You can help by participating in our "I Support" program, allowing us to keep offering readers access to our incisive coverage of local news, food and culture with no paywalls.
Make a one-time donation today for as little as $1.