Smart Crowd Gives Thanks for the Gift of Willie Nelson

Last week, we reserved an entire day to show gratitude to those who’ve made lasting and favorable impressions on our lives. When Thanksgiving Day ended, we started searching for gifts to celebrate those we honor. Getting to see Willie Nelson perform live last night at Smart Financial Centre was the perfect holiday season mashup. It was a chance for an appreciative crowd to thank the man for six decades of music. It was also a gift for many in the audience to see the legendary songwriter and his band perform live.

Nelson’s uniquely familiar visage was first visible to the audience at 8:20 p.m. and it earned him a standing ovation before he ever played a note. He beckoned everyone to be seated, then tossed his jacket off with abandon and grabbed his guitar, Trigger, whose place in music history is as entrenched as Nelson’s. The show opened with “Whiskey River” and everything to follow flowed quickly as a rushing stream. Nelson packed 20 songs into a set which ended promptly at 9:20 p.m. and it was an hour Nelson’s Houston fans would forever cherish.

The show sped along because there wasn’t much stage banter between Willie and the crowd. He didn’t offer extended monologues on all he’s experienced in a legendary music career or uncommon personal life. After all this time, what more is there really to say? Everything anyone needed to know was in the music and in the exchanges of thanks the artist and audience shared between songs.

The backdrop was a Texas flag, broad as the entire stage, there just in case you forgot where you were, which was impossible. Maybe “Good Hearted Woman” put you two-steppin’ in a honky tonk. Perhaps “Mamas Don’t Let Your Babies Grow Up to Be Cowboys” recalled the time you and your buddies warbled it on the tailgate parking lot before the team from Dallas lined up against your Houston Texans. Did you recall a tender moment when Willie sang “You Were Always on My Mind”? Whatever memories the songs retrieved, those memories all sounded like they took place in Texas. 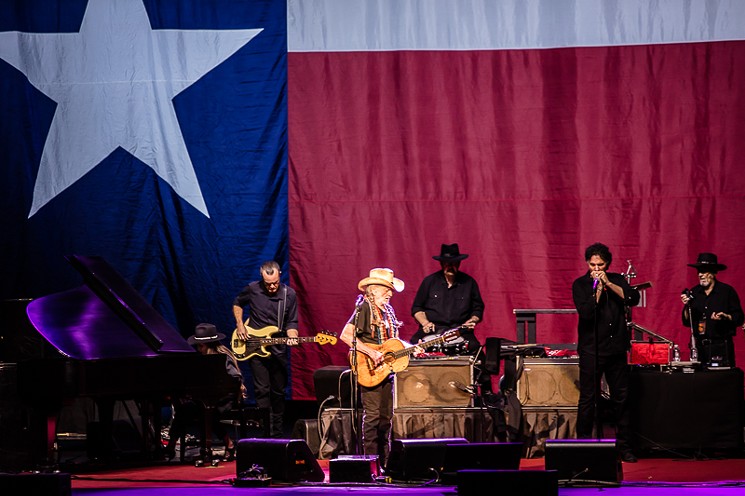 Nelson’s voice sounded fine. Before the show, lots of folks warned he doesn’t sing so much as he recites his lyrics these days. He did go the narrative route on a tune or two – particularly “On the Road Again,” on which the audience did much of the heavy lifting. But, he also sang a lot. His voice was eloquent on a moving rendition of “Angel Flying Too Close to the Ground” and he was downright jazzy on “Still Is Still Moving to Me.”

The show was definitely a country show, but Nelson’s lifelong affair with jazz was evident all night, if not so much in song arrangements then certainly in his playing. He and his sister, Bobbie (whom he proudly introduced as a recent Texas Music Hall of Fame inductee) moved from the honky tonk to a backwoods juke joint for Django Reinhardt’s “Nuages.” On that one, he let Trigger roam around a bit and everyone in the crowd was treated to the guitar’s one-of-a-kind tone. It was as signature a moment as Nelson playing something like “Crazy” or “Blue Eyes Crying in the Rain” – neither of which made last night’s set list. If omitting those meant more time for the Nelson siblings to trade jazzy inflections on their instruments of choice, the trade was absolutely worth it.

The end of the set was reserved for songs that outright spoke to the notion lots in the crowd were thinking – will this be our last chance to see Willie? At 85, he looked in good health and spirits last night, but he’s had ailments recently and, to paraphrase his own words, his touring pace would kill a normal man. If most of the set was a remembrance of victories past, then the end of it was Nelson’s promise that his future would be fine and we should all be comforted by songs like “Roll Me Up and Smoke Me When I Die” whenever he actually does. He went straight from “Still Not Dead” to “Will the Circle Be Unbroken?” and “I’ll Fly Away,” which featured a little interpolation of “I Saw the Light.” The songs moved the crowd to sing along for a fitting, celebratory end to the evening.

The Opener:  From right down the road in Katy, Hayden Baker got the crowd primed with a half-hour set of original country western tunes. Well-crafted songs and good looks can't hurt the local kid's chances at more opportunities like these down the line. His album Born in the Wrong Generation is due December 7. He was appropriately grateful to be sharing the stage with a legend, at one point saying, "Y'all feeling good out there tonight?  It's the best Sunday night I've ever had."

Personal Bias: As someone who regularly tosses AARP membership applications into the trash (denial – it’s a helluva thing), I’m of an age now where I should have already witnessed my first Willie Nelson show long before last night’s. I admit, I had not, but I jumped when the chance arose to correct this travesty and finally see Willie onstage. I knew I wouldn’t be seeing the man in his prime, but I also knew it would take something terrifically egregious on his part for me to leave the show feeling anything close to disappointment. Seeing Willie live is just something you do as a Texan, like visiting the Alamo or singing/clapping on cue to “Deep in the Heart of Texas.” I can scratch it off my “Texan-Til-I-Die” bucket list.

Also, there’s “On the Road Again,” which I’ve always loved, but was never my favorite Willie song until a decade ago when my own kids started pursuing music. Since then, they’ve trekked all over the globe playing music for folks, just like this Texas legend. Our family has met and housed a lot of touring and traveling musicians over that time, and they all live by the song’s credo of loving a life of making music with one’s friends. Experiencing all that has been one of the blessings of my life. To hear its soundtrack performed live by the man who wrote it was a thrill.

The Crowd: wore Cowboy hats and trucker caps, Beto for Senate tees and bandanas emblazoned with marijuana leaves. They’ve been to the Alamo. They know the words to “Deep in the Heart of Texas.” They may have even tried Amarillo’s Big Texan 72-ounce steak challenge as they heavy-heartedly left Texas or gleefully returned. And they’ve all seen Willie Nelson live in concert.

Random Notebook Dump: If you came here only for the photos of the show and not this one guy’s narrative, this one guy wouldn’t blame you a bit. That’s because the photos you’re viewing here were shot by Violeta Alvarez. If you’re mostly a Willie fan who was lured here to check on last night’s show and you’re not necessarily someone who follows the local music scene, you may not know that Alvarez is one of the best concert photographers anywhere, and she resides in Houston. Her work has appeared in music-centric magazines like Rolling Stone and Spin, as well as broadly-published titles like Entertainment Weekly.

Alvarez’s photos have long brought to life some of the shows Houston’s been lucky to host from artists across genres. Recently, she curated on the Instagram page of The Photo Ladies, a group of women photographers from all over the world, and she frequently displays at art exhibitions. If you want to see more, like the amazing shots she took of Christina Aguilera last month at Smart, or pics of everyone from Snoop Dogg to Alice Cooper, check out her web page. Recently, she told me that one of the first gigs she ever got was shooting photos of Willie Nelson. I’m glad she got back around to him last night.

Still is Still Moving to Me

Beer for My Horses

Mamas Don’t Let Your Babies Grow Up to Be Cowboys

Angel Flying Too Close to the Ground

On the Road Again

Always On My Mind

Roll Me Up and Smoke Me When I Die

It’s All Going to Pot

Georgia On My Mind

I Been to Georgia on a Fast Train

Will the Circle Be Unbroken?

I’ll Fly Away/I Saw the Light
KEEP THE HOUSTON PRESS FREE... Since we started the Houston Press, it has been defined as the free, independent voice of Houston, and we'd like to keep it that way. With local media under siege, it's more important than ever for us to rally support behind funding our local journalism. You can help by participating in our "I Support" program, allowing us to keep offering readers access to our incisive coverage of local news, food and culture with no paywalls.
Make a one-time donation today for as little as $1.