The one and only Willie Nelson Photo by Jack Gorman
Willie Nelson
NRG Stadium
March 4, 2020

Willie Nelson is one of a kind.

For nearly 60 years now, he has been one of country music’s most beloved icons, capable of bringing audiences to the brink of tears with melancholic tunes like "Always On My Mind" only to swiftly lift their spirits moments later with playful ditties like "Still Not Dead."

On Wednesday night, the Red Headed Stranger made his 11th appearance at the Houston Livestock Show and Rodeo in front of tens of thousands of fans. And while he didn't exactly reinvent the wheel this go-round, he and his band - The Family - gave the crowd more than enough reason to thank their lucky stars they were in attendance.

The show began with "Whiskey River," a longstanding favorite and staple of Nelson's live performances. Recorded nearly 50 years ago and eventually released on 1973's Shotgun Willie - one of the best of his 100-plus albums - the track told an all too familiar story of attempting to outrun heartbreak by way of liquid comfort.

From there, the man of the evening hopped back and forth between classics like "Mamas Don't Let Your Babies Grow Up To Be Cowboys" and newer, lighter cuts such as "Roll Me Up." A few Hank Williams covers were thrown in for good measure, and Nelson's son Lukas regaled the crowd with a soulful rendition of Stevie Ray Vaughan's "Texas Flood" just 15 minutes into the show. 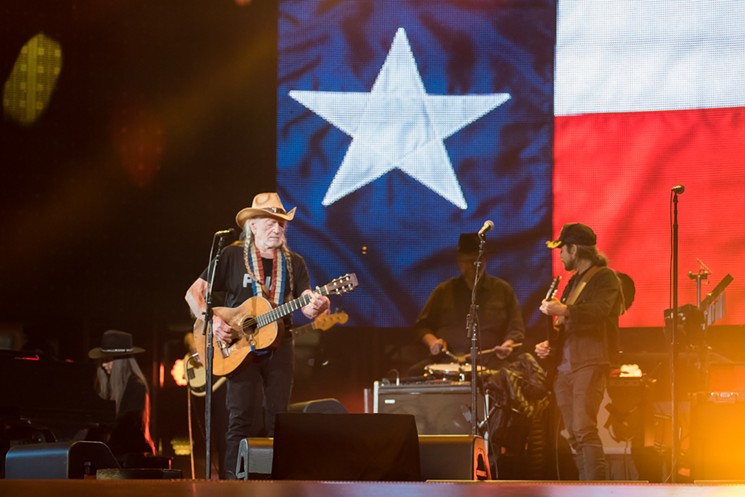 The Red Headed Stranger and The Family
Photo by Jack Gorman
Breezing through nearly 20 tracks in just over an hour, the so-called "ambassador of weedville" delighted the crowd with humorous tunes, heartfelt ballads and plenty of fan favorites. Throughout the performance, he dedicated tracks to longtime friends and collaborators who have passed away - namely "Good Hearted Woman" to Waylon Jennings and "It's All Going To Pot" to Merle Haggard.

Wednesday's set ended with "Will The Circle Be Unbroken," after which Nelson took his time leaving the stage while The Family continued playing. He walked slowly from end to end, waving at attendees and flashing a big grin for the cameras before finally making his exit.

At the risk of sounding like a broken record - because Nelson's retirement has been speculated on for the better part of two decades now - it was hard not to wonder if this would be the last time the 86-year-old singer-songwriter would perform at RodeoHouston.

But that question left our minds almost immediately, quieted by the crowd's roar as Nelson waved goodbye. So instead of pondering the end, we reflected on the Texas-born artist's greatness. His honesty and wit have inspired countless other musicians and will continue to do so long after he hangs up his touring boots. So for as long as we've got him, fans should take every opportunity to celebrate the musician-turned-author-turned-activist.

Because Willie Nelson is one of a kind.

SET LIST
Whiskey River
Still Is Still Moving To Me
Beer For My Horses
Good Hearted Woman
Texas Flood (Stevie Ray Vaughan cover)
Mamas Don't Let Your Babies Grow Up To Be Cowboys
It's All Going To Pot
Roll Me Up
Still Not Dead
Jambalaya (On The Bayou) (Hank Williams cover)
Hey, Good Lookin' (Hank Williams cover)
Move It On Over (Hank Williams cover)
Angel Flying Too Close To The Ground
On The Road Again
Always On My Mind
It's Hard To Be Humble
I'm The Only Hell (Mama Ever Raised) (Johnny Paycheck cover)
Will The Circle Be Unbroken