For Years, Young Fan Dined with the Rolling Stones at the Beggars Banquet 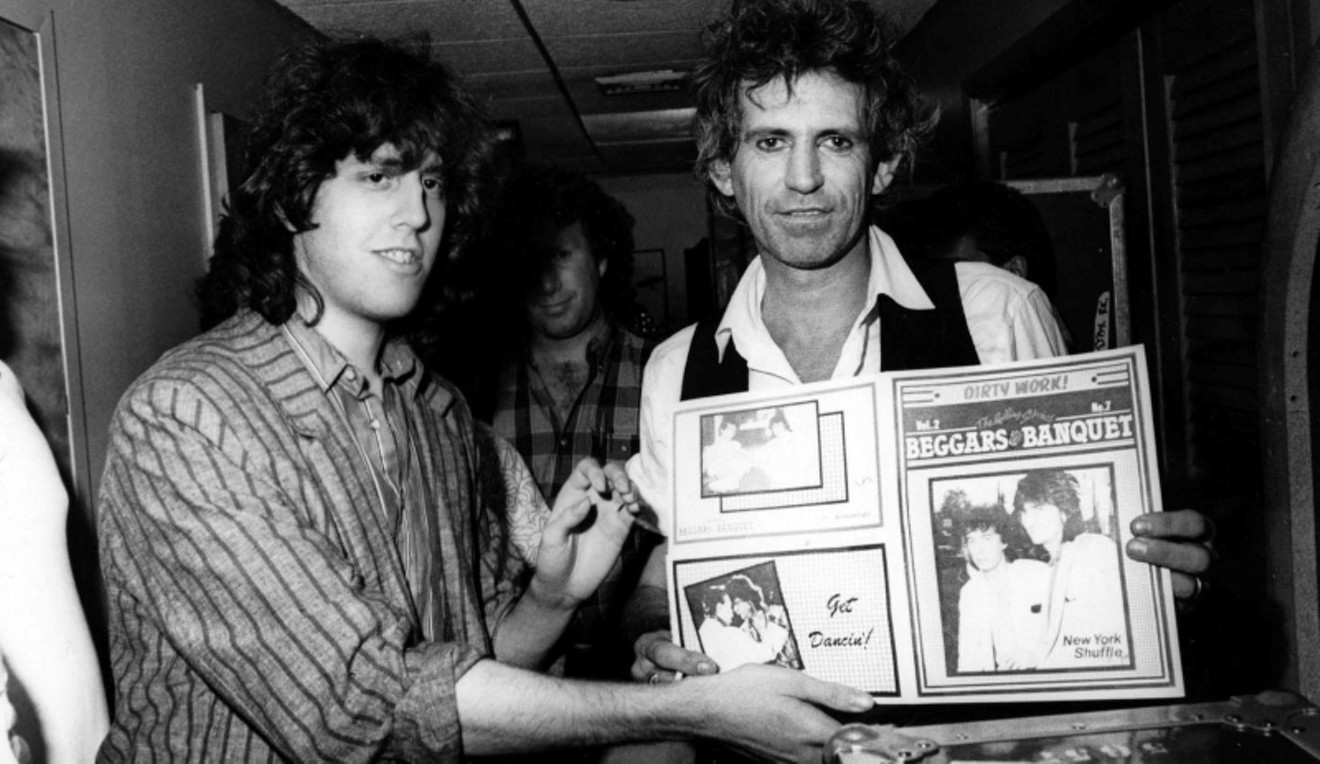 Bill German and Keith Richards with a copy of Beggars Banquet, a fanzine that German began publishing when he was only 16. Beggars Banquet Archives
How big of a Rolling Stones fan is Bill German? There are many examples which attest to German’s steadfast allegiance to “The Greatest Rock and Roll Band in the World,” but one stands out in particular. That would be the time when German put off losing his virginity to a willing and enthusiastic young lady, opting instead to go buy the last copy of a new Stones bootleg at a nearby record store. Now that’s dedication. Or stupidity, depending on your point of view.

By the time he was in his early 20s, German was hanging out with the Rolling Stones on a regular basis. And not just chatting with the lads backstage at concerts. No, young Mr. German was welcomed into the homes of Rolling Stones guitarists Keith Richards and Ronnie Wood. Invited to come over and have a few drinks and a snack. Maybe listen to some records or watch television. 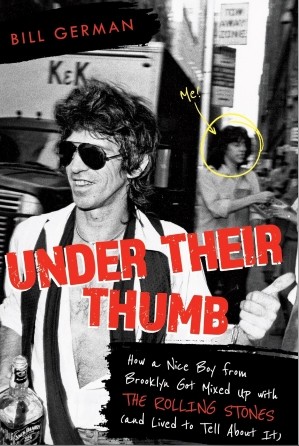 Book Cover
For any Stones fan, it sounds like paradise. But, as many have learned, turning a passion into a profession can be fraught with peril. Such was the case with German, who began publishing the Rolling Stones fanzine Beggars Banquet in 1978 when he was 16, sneaking in to use his school’s mimeograph magazine to (literally) crank out each issue. Within a couple of years, German managed to get copies of his creation (by then professionally printed) into the hands of several Stones.

By the time it was all over, German had spent well over a decade following the band around the world and grown to realize that he had become “a 30-year-old man whose course in life had been charted by a 16-year-old Stones fan.” Hence the title of his memoir, Under Their Thumb: How a Nice Boy from Brooklyn Got Mixed Up with the Rolling Stones (and Lived to Tell About It) (Backbeat Books, 396 pp. $29.95).

The first edition of the book was published in 2009, and a just-released update fills readers in on what German has been up to since then. He folded Beggars Banquet in 1996 but has remained in touch with the Stones world. So what motivated him in the first place?

“The music, first and foremost,” German says, speaking via Zoom from his girlfriend’s apartment in New York. “But it’s the rebelliousness, obviously. So when I was a 10-year-old kid and heard them for the first time, it was like the wildest music, the wildest lyrics I had ever heard. Then you start seeing pictures of them, and they are the wildest-looking guys. And then you start reading up on them, and you think, ‘Wow, I’ve got to find out more about these guys.’ They could beat up the Monkees or the Beatles!”

Two weeks after his high school graduation, German finally came face to face with his idols. “I met a bunch of them at the same time, and that was June 26, 1980,” German says, fondly recalling the date. "I had met people who had met them, because they were living in New York at the time. Or at least the ‘sociable three,’ Mick [Jagger], Woody, and Keith. They were out and about in New York, and I knew a lot of people who would see them. So in some ways, I felt it was inevitable that I would meet them. Then I found out that they were having a party for Emotional Rescue when it came out, and I said, ‘I’m just going to show up at the club.’ I knew people who were invited, and they told me exactly when and where."
“So I showed up with my fanzine,” German continues, “and I saw them walking in. Charlie [Watts] didn’t come to that party, but the other four did, and I decided that, on their way in, if I give them a copy of the fanzine, they’re just going to lose it or destroy it or trash it, so I waited for them to come out. And Mick came out first, and he kind of gave off a vibe like ‘Don’t fuck with me. I just want to get into my limo.’ And the other three came out, and they’re gonna share a limo – Keith and Woody, and Bill Wyman. And Keith was the total opposite [of Jagger]. He was willing to meet fans, because at that point there were 20 or so people waiting for them to come out of this party, including me. Keith was surrounded, and Bill Wyman was signing something, and I said, ‘I’m just going to go up to Woody and hand him an issue of my fanzine.’ Like a process server! So that’s actually captured on the cover of the book.” Sure enough, one can see the teenaged German standing behind Richards, the young scribe's head circled in yellow, accompanied by the helpful legend “Me” and an arrow pointing in his direction.

Author Bill German passed up a chance to lose his virginity in order to score a copy of the first bootleg from the Rolling Stones' 1978 tour.
Album Cover
The Stones liked what they saw, and German began to regularly travel in their orbit. Though sometimes members of the Stones’ management team tried to restrict German’s access to the principals, the Stones themselves — particularly Wood and Richards – stuck up for him and made sure that he had plenty of information for each new issue of Beggars Banquet. “Ultimately what happened was that they started approaching me, like, ‘Hey, come to this party.’ They knew I wasn’t going to steal their cocaine, I wasn’t going to steal their silverware.”

Still, it wasn’t always sweetness and light, particularly so far as Jagger was concerned. On several occasions, the Stones’ lead singer took German to task for revealing too much about his activities on both the financial and romantic fronts.  More than once, Jagger got in German’s face, as depicted in artist Ward Sutton’s illustrations. Check out the panel in which Mick looks as if he’s turning into the Hulk (“I don’t like what you wrote!”).

German lived the life that most Stones fans could only dream of, following the band on tour, hanging out with VIP’s in dressing rooms, and even watching shows from a “cubbyhole” on stage, where family members and close friends were seated. But as time went by, German began to encounter more logistical obstacles, most having to do, directly or indirectly, with Jagger’s obsessive quest for additional millions.

German was tired of his existence, despite all its perks. “The band’s machinery had beaten the enthusiasm out of me,” German writes. “I realized that my high school history teacher was right: ‘The problem with mixing hobby and profession is that it’ll make your work feel like fun, but it’ll eventually make your fun feel like work.’”

In time, German started to resent the situation. At a party, Richards told German that, with the Stones on tour, he would have plenty to write about in the coming year. German was not in the best of moods, having been dumped by his girlfriend moments before, after refusing to dance to a disco record with her. “I snapped at him,” German writes. “’Oh yeah,’ I asked sarcastically. ‘Like I haven’t given you enough of my life? I been writing about you for 15 years!’ I smiled as I said it, but he must’ve sensed the edge in my tone. He looked me straight in the eye and went, ‘Hey, man, I didn’t ask ya to. No one’s makin’ ya.’”
Though Richards’ words may seem harsh, German viewed his statement differently. “He was absolving me and telling me I was free to go. When he made his comments, he half-smiled and put his hand supportively on my shoulder.”

And what of German’s bootlegus interruptus? “It was literally the first bootleg to come out from the ’78 tour,” German says, the excitement still in his voice after 40-plus years. The young lady was enthusiastic, but German was, shall we say, rather single-minded. “She was really gung ho –‘Hey! Woo hoo!’ – and she was the aggressor. The phone rang, and I thought it could be a family emergency. And I picked it up, and it was a friend, standing outside Zig Zag Records on Avenue U in Brooklyn. He said, ‘You better get down here. They got 10 copies in, and there’s only one copy left. I told the store owner to save a copy for you, but he said you’ve got to get down here in, like, 20 minutes.’ And I said, ‘OK, I’ll be right there!’” Fortunately for German, his female admirer did not hold a grudge. “Ultimately,” he says, “it worked out!”
KEEP THE HOUSTON PRESS FREE... Since we started the Houston Press, it has been defined as the free, independent voice of Houston, and we'd like to keep it that way. With local media under siege, it's more important than ever for us to rally support behind funding our local journalism. You can help by participating in our "I Support" program, allowing us to keep offering readers access to our incisive coverage of local news, food and culture with no paywalls.
Make a one-time donation today for as little as $1.