Samantha Fish is "Confident and Full of Swagger"

Guitarist Samantha Fish will perform at the Heights Theater on Saturday, January 22, in support of her new album Faster. Photo by Kevin & King
Samantha Fish has gotten to where she is by doing things her own way. And that includes maintaining her surname. More about that later.

The fruits of Fish’s individualism will on display when she appears at the Heights Theater on Saturday, January 22. As is the case with many artists (the Rolling Stones being an obvious example), the blues remains central to her musical identity, but Fish has eagerly brought extra-blues influences into the mix, creating a unique sonic style.

When she started to gain a bit of national recognition, Fish was tagged as a “blues prodigy,” much like young guitar slingers Joe Bonamassa, Kenny Wayne Shepherd, and Johnny Lang. And at the time, the label was not inaccurate. 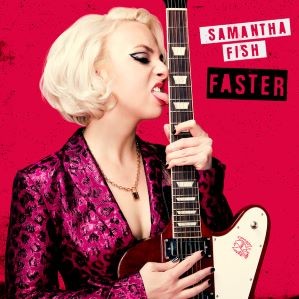 Album cover
During her formative years growing up in Kansas City, Fish began sitting in at weekly blues jams held at Knuckleheads, a local music hotspot. While still in her teens, Fish put a band together and began cold calling bars, clubs, and any venue that might book live music. Momentum built quickly, and soon Fish had a record deal, playing concerts and blues festivals throughout the United States and Europe.

Fish has always been a voracious student of music – blues and everything else. “I came up in the age when you could just go online and type in anything, and there it was. The music I would consume as a kid, it was all over the place. I feel like I am a blues artist, but I like to reinterpret, put my own spin on it, and say something different with it. There’s a lot of purists who have the stance that the blues is a very specific thing. The artists that I grew up loving, like Howlin’ Wolf, Mississippi Fred McDowell, Skip James and R.L. Burnside, they said what they said so perfectly that I can’t recreate it.

“I have to say something new. You take what really inspires you and moves you, and you put it into your music. When I go out and perform, I try to bring the people that were important to me and inspired me to the forefront of what I do. But as much as I am interpreting the blues in what I’m doing, somebody else interprets it completely differently, and that’s the beauty of it.”

Her latest album, Faster, backs up Fish’s assertion that she is anything but a purist. The badass guitar playing is always there, but soul, r&b, trip-hop, new wave, and even a taste of rap (courtesy of fellow Kansas Citian Tech N9ne) have been included in the mix. On paper, this might sound like an ungodly mess, something of a “kitchen sink” approach. The album ranges far and wide, but Fish and producer Martin Kierszenbaum (Lady Gaga, Sting) maintain a sufficient amount of thematic unity to prevent it from sounding like the Spotify Playlist from Hell.

Speaking by phone from her home in Louisiana, Fish explains that the album’s title track was written with fun in mind. The lyrics, which portray Fish as the aggressor in a romantic situation, recall — at first listen — some of the so-called “cock rock” from the ‘70s, though flipped around to feature a female perspective. “Come here, right now/‘Cause I’ve got an inclination/Let’s fight and make up/Like a story in a movie/One night, break up/Role play like a groupie.”

“It’s a tongue in cheek song, sort of fun and playful,” Fish says. “When we were working on this record it was such a heavy time, the middle of the pandemic, 2020, and I wanted to write something kind of uplifting light-hearted, and fun. Confident and full of swagger.”

"I love old-school rock and roll fashion. I love anything glam."

Fish is certainly not lacking in swagger, both in terms of music and fashion. Her visual style is dynamic and constantly evolving, but creating a distinctive, striking look has been something of a double-edged sword.

“My fashion icons – I love Prince, I love Elton John, I love the Rolling Stones. I love old-school rock and roll fashion. I love anything glam. I love the fashion, the style, but sometimes I feel like that gets sexualized. And obviously women are held to a different standard than men are when it comes to our attire, how we present ourselves onstage. It’s a paradox, because I actually do enjoy that part of it. So does that mean I’m ‘selling it’ if I enjoy it? It’s just part of my aesthetic from top to bottom. To me, it’s show business.

“If you want to see an example of sexism, just go to the Facebook page and see what people are saying. It’s alive and well, not only in the industry, but with some of the fans as well. What’s happening now is that it’s not left in the shadows. People are calling out this inequity, and that’s going to spur some change. I think if we keep pushing it in the right direction, if we keep talking about it, it will get better generation to generation. But we’ve got to keep calling it out.”

Unfortunately, some members of the media have not helped the situation. “I had one guy ask me, on a live radio interview, ‘Are you going to be wearing a short skirt and high heels for the men in the audience tonight?’ We had done a lovely interview, the whole band in the room with me, and I remember feeling humiliated, thinking, ‘Is this what I’m boiled down to?’ It made me feel like we weren’t there for the music. I’m there pushing music and art, and this guy’s trying to sell tickets for some other reason. Is this a question Bonamassa would get? Or Kenny Wayne Shepherd? Empathically, ‘No.’”

Heretofore, much critical attention has focused on Fish’s formidable guitar chops, but Faster shows that her vocals deserve equal consideration and admiration. Has singing always come naturally to her? “No. No. Hell no.” Fish says.

Her initial singing experiences were in church, where several of her relatives were standouts in the choir. “I grew up around people who would really belt it out. And I was always super shy and introverted, and I was like, ‘Oh my God! Why are you singing so loud?’”
When Fish first sang in public – always a daunting experience - she received a vote of confidence from an older musician who was part of the blues jam. “He told me, ‘You have the voice.’ He heard a potential in there, a tone. So I’ve taken vocal lessons. I work on it. When I have time off, I try to hit the ‘vocal gym.’”

And what about her name? Has anyone in the industry suggested a change? A nom de stage? “Yeah. It wasn’t even too long ago. That’s why it didn’t happen, because I’m already kinda in this with this name.” As it turns out, her last name was not the object of contention. “They wanted me to shorten my first name to ‘Sam.’ Sam Fish.”

“People ask if it’s a stage name all the time, and I’m like, no, do you think I would’ve gone with that? We put our heads together and we came up with ‘Samantha Fish?’ If I change my name at this point, it’s going to be something bizarre…bonkers…silly!”

Samantha (not Sam!) Fish will perform at the Heights Theater, 339 W. 19th, on Saturday, January 22, at 8 p.m. For information, call (214) 272-8346 or visit theheightstheater.com. $28.
KEEP THE HOUSTON PRESS FREE... Since we started the Houston Press, it has been defined as the free, independent voice of Houston, and we'd like to keep it that way. With local media under siege, it's more important than ever for us to rally support behind funding our local journalism. You can help by participating in our "I Support" program, allowing us to keep offering readers access to our incisive coverage of local news, food and culture with no paywalls.
Make a one-time donation today for as little as $1.