Scarface supports his son Chris Jordan as he accepts a donation from Adam Ross for the Chris Jordan Quality of Life Foundation. Photo by Juan Carlos Zermeno
“Hey Brad! Let’s try this one,” exclaims Adam Ross, as he walks across the room with a tie in his outstretched hand.

As Brad takes the tie and makes a few more adjustments, Ross watches on and directs the photographer to snap another set of pictures. As he looks, Ross speaks out loud to himself.

“See this…this is what it is all about. I see a lot with customers, and of course we’re selling clothes, but this is a moment that shows you what it’s all about. Moments between a father and a son."

The father being spoken about is legendary MC Brad Jordan better known as Scarface. His son is Chris Jordan who recently created the Chris Jordan Quality of Life Foundation, an organization dedicated to spreading awareness to youth about the importance of kidney donations to family members in need.

The first major donor to the organization is Adam Ross, who goes by the moniker The Suit Boss on social media. They all came together at Adam Ross Customs a day before World Kidney Day, a global campaign aimed at raising awareness of kidney importance, in the middle of March, this country’s national kidney month. It’s a story that starts with Scarface but shows how the focus on health can bring people from all walks of life together.

The three men sit down and discuss music, food, health and more.
Photo by Juan Carlos Zermeno
“People don’t know the full story,” sighed Scarface as he sits down with his son and Ross later in the day. “I heard through the grapevine that [the doctors] didn’t even want to work on me because they felt like I was going to die.”

While the mood has been playful and festive as the three men discuss suits, family, food, and music, things were starkly different two years ago. The world was reeling with news of a new virus affecting the world in a way that hadn’t been felt in almost a century. The Houston community, as well as the Hip Hop community in general, was shocked to hear news that Scarface, an MC who started his career with the Geto Boys and further solidified his place in the genre with an arguably unmatched solo catalog, was suffering from complications due to COVID.

During an interview with fellow Geto Boy Willie D in the early months of 2020, Scarface described developing pneumonia and the start of problems with his kidneys. Now in better health, he looks back and describes a situation that the general public might not have taken as seriously as they needed to at the time.

With him during this process was his son and, as he watched his father’s condition get worse, Chris stepped up to make sure needs were handled. He quickly found bigger decisions would need to be made.

“In the beginning when he first got sick, I think he just needed a blood transfusion,” Chris recalls. “Then sometime around March of 2020 we realized he was going to need a kidney. I just thought, if he needs it, I’m going to be there for him.”

As his father started to deal with kidney failure, Chris began his journey of being a possible kidney donor. It was an experience neither one of them was familiar with and the two immediately saw they needed guidance. According to the CDC, chronic kidney disease is estimated to affect 15 percent of U.S. adults or roughly 37 million people, with 9 in 10 adults not even knowing that they suffer from the condition. The two most common causes of kidney disease are diabetes and high blood pressure, diseases that are often described as silent killers.

That silence was broken two years ago as Scarface, and many other Americans, came to grips with the effects of coronavirus. For some, the virus was mild causing symptoms similar to a slight cold, but for others long term debilitating conditions began to develop including kidney failure. As Chris went through the process of organ donation, he found himself reaching out to others who had gone through the same ordeal. The comfort he received from their counseling is something he wanted others to feel as they went along the same journey.

“Our foundation wants to help improve the quality of life for dialysis patients and anyone else going through kidney failure while at the same time bringing awareness to living donors,” says Chris. “I don’t want people to be afraid of donating a kidney because it is not going to affect your life in the way that many people think. I know a girl that gave her father a kidney and talking to her really eased my mind. Having advocates that have actually been through the process really means a lot.”

Two years later the two men sit in a custom suit shop after being directed there by a friend who wanted the two to celebrate Scarface’s improving health after the transplant surgery. The owner of the shop, Adam Ross, became interested in the story because of his family’s history in the medical field.

“My mom works for LifeGift organ donation, the biggest organ donation clinic in the United States,” explains Ross as he looks at his two new clients in their suits. “She would call me up randomly and make sure I wasn’t doing things like drinking and driving because she was constantly seeing the negative results. She would see young kids come in after dying in tragic accidents and was a part of the team making sure their organs were harvested, packed in dry ice, and sent out to people that were in need. What she witnessed and the stories she took home affected myself and my whole family. I’m an organ donor. My entire family are organ donors. I’ve had family members that have received organs. So, when my friend tells me about the Jordan’s story I had to reach out.”

Ross did more than reach out, dedicating a portion of sales from one month of the business to help Chris launch his foundation. It’s a relationship that all three men plan to continue, with Ross promising that his will not be the last donation and the Jordan’s letting him know that he has two new clients for life.

For a disease that can affect so many, putting a face to the story is already showing Chris Jordan he is moving in the right direction. After reports surfaced that he was donating a kidney a stranger reached out to him to ask questions about his own impending surgery. 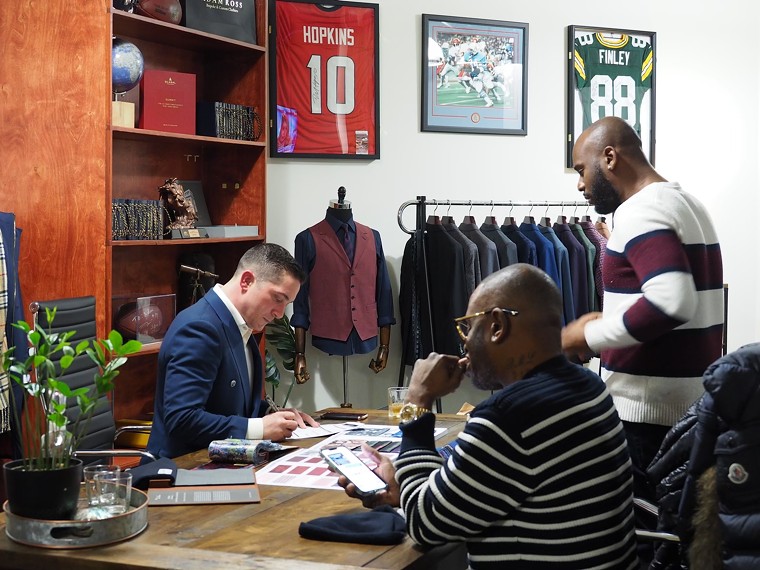 Adam goes through the fitting process with Chris Jordan and Scarface
Photo by Juan Carlos Zermeno
“I get up early to run so around four in the morning I get an Instagram comment from a guy who was about to give his dad a kidney. He saw my story and had questions. I immediately reached out to him, and we just had a conversation. He gave me all his concerns and it was the same concerns that I had. Going from not ever having to go under the knife to intentionally going under the knife is a different thing. But I’m happy to say he donated a kidney to his father in the beginning of March.”

While the foundation is new, Chris knows he’s on the right track because of the response he’s getting from the community. He’s starting off with clear and concrete goals making sure the foundation is on the pathway for growth so that it can help the more and more people. Right now, the goal of the foundation is to get two to five people off the transplant list per year. While he is happy with the future of the organization, it's evident that he’s even more pleased with his father’s progress. And while Scarface sarcastically takes jabs at him regularly, it’s impossible for him to hide the overwhelming pride that he has for his son.

“He’s my hero. He saved my life. He had to push me in wheelchairs, help me get off the floor, and help me get in and out of bed. When I needed him, he just told me not to worry about it. He’s got me.”
KEEP THE HOUSTON PRESS FREE... Since we started the Houston Press, it has been defined as the free, independent voice of Houston, and we'd like to keep it that way. With local media under siege, it's more important than ever for us to rally support behind funding our local journalism. You can help by participating in our "I Support" program, allowing us to keep offering readers access to our incisive coverage of local news, food and culture with no paywalls.
Make a one-time donation today for as little as $1.