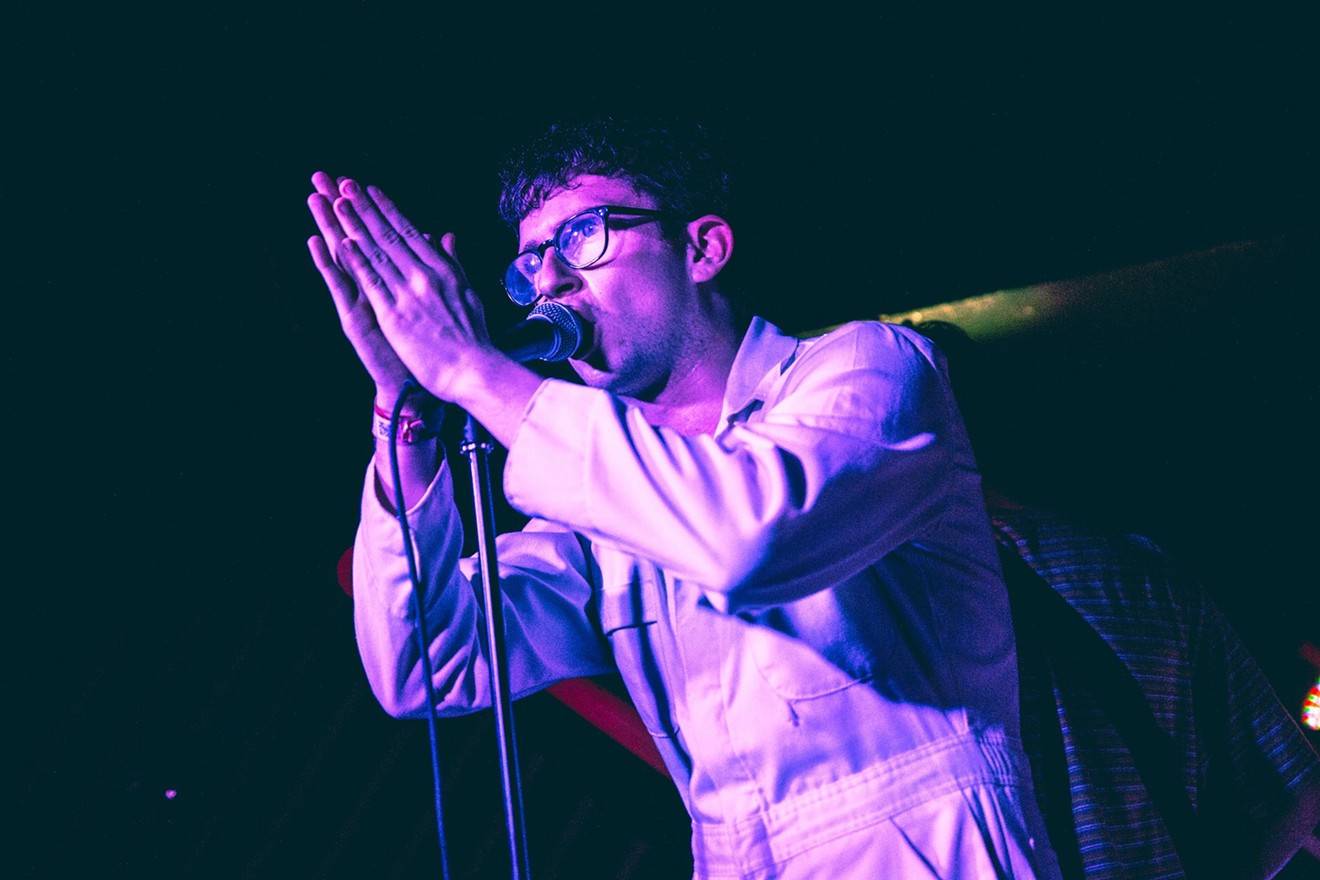 Shame held the audience in the palm of their hands last night. Photo by Derek Rathbun
A Friday night in Houston can typically mean that there are plenty of local and touring bands rolling through town. Last night, because we're in the midst of SXSW in Austin, the beginning of a slew of acts to come rolling through began at Satellite Bar. With an opening performance from Bat Fangs, a support slot from Baltimore's Snail Mail, and a headlining performance from South London's Shame, three of the best bands at SXSW came and played on the same show, and it was truly fantastic.

For starters, it should be noted that the crowd was really receptive to all three sets, and behaved admirably for all three bands.  Bat Fangs began and brought their debut release Bat Fangs to life in a loud and emphatic nature. The album is full of '80s-tinged rock songs that sounded pretty amazing inside the small room. While tearing through the set, Betsy Wright also of the band Ex-Hex wailed on the guitar like she was born to do so.  While their set wasn't incredibly long, it was sweet and to the point, leaving the audience wanting more after about thirty minutes.

Snail Mail had no problem breaking out new songs.
Photo by Derek Rathbun
Snail Mail hopped up next and played a set of primarily new songs for their time slot. While I was more than happy to hear the new tracks, the album not being out yet meant that the crowd was listening and watching as intently as I'd seen a crowd watch an act in years. Snail Mail seemed to play to the largest amount of people, and they admitted that they don't write out a set list after they played, so the song titles were unknown. 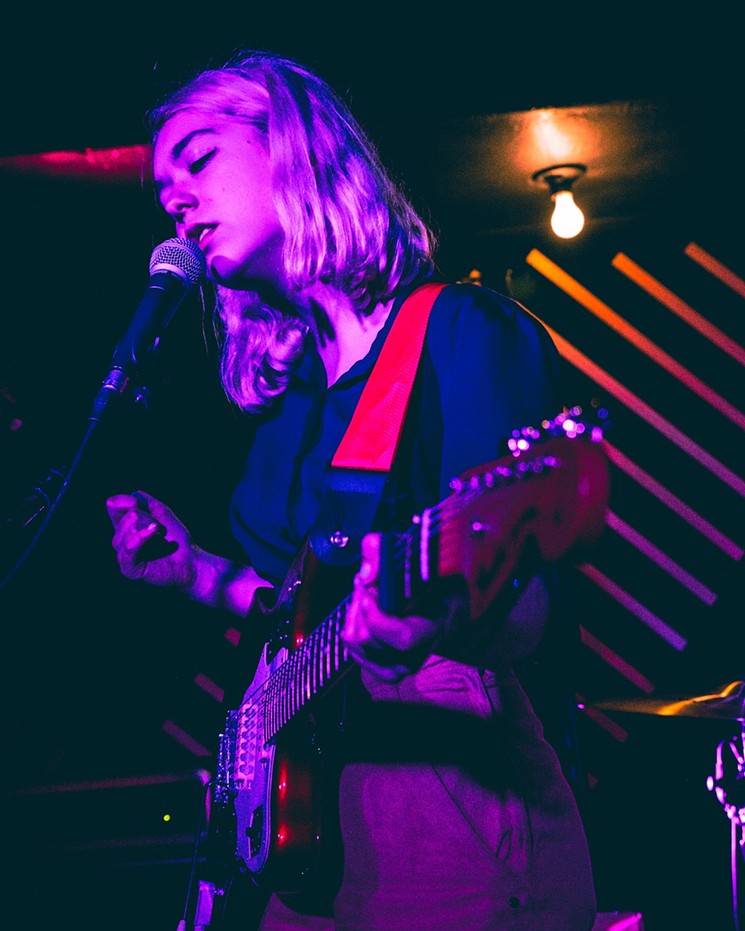 Singer Lindsey Jordan sang with all her heart during Snail Mail's set.
Photo by Derek Rathbun
That being said, the band performing now as a four piece sounded better than the last time they came to town. Opening their set, the crowd watched in awe as Lindsey Jordan of Snail Mail sang with all of her might.  This continued into the second track, also a new song, where those in attendance seemed to hang onto to every note that dripped out. The third song, "Thinning" off of the band's debut E.P. Habit, sounded more revived and worked better under this new addition on guitar.  The next three tracks were all new, the first with an added shaker worked and really seemed to keep the audience's attention. The second had a more upbeat tone while the third had a nice groove and gave everyone watching some new tracks to chew on before the band's new album gets released. 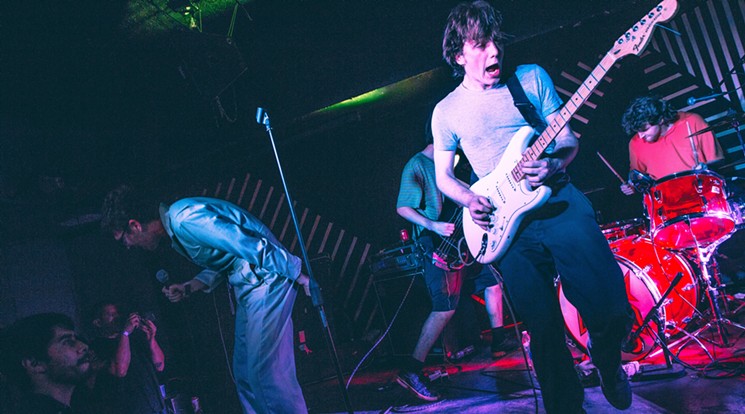 Shame proved their post-punk prowess at Satellite Bar.
Photo by Derek Rathbun
Of course, this was all before Shame took the stage to annihilate the audience in a whip of fury and energy. Before the band went on, vocalist Charlie Steen says that the band had been on the road since January 26, five weeks of which are here in the United States and that they'd performed just that morning in Austin, one of nine shows in just four days. While the band has been trekking across the country and playing every city that will have them, they didn't seem tired in the least when they took off like crazed jackals stealing food in the night.

Charlie Steen captivated the crowd in Houston like he owned the world.
Photo by Derek Rathbun
Opening with the track "Dust On Trial," the band quickly burned through the song as if they were ready to prove their strengths as one of the best new live bands going. They followed this up with "Concrete," and while the stage at Satellite Bar was a little too small for the five piece, they had no problem moving around, often jumping up as they played the track like the world was coming to an end. By the time they began the opening notes of "One Rizla," the room had become too steamy for singer Charlie Steen who began unzipping his jumpsuit top. The crowd was enthusiastic with each song, and began jumping to the beat and getting rowdy like you'd expect at such a show.

Before the start of "The Lick," Steen remarked "smile, this is entertainment" before stripping off his jumpsuit top, performing shirtless. The talk sing nature of the song meant that the groove heavy bass thumped along like the band were performing in a slow motion disco. When the snappy drums of "Tasteless," began, it was obvious that the band was ruling the crowd like a king who was more gracious than needed. The band's energy was unmatched as they began to whip up a frenzy of animated moves as they ripped through the song. Allowing audience members to sing along on the mike, I was shocked to see how many people in the crowd actually knew the lyrics of the song. 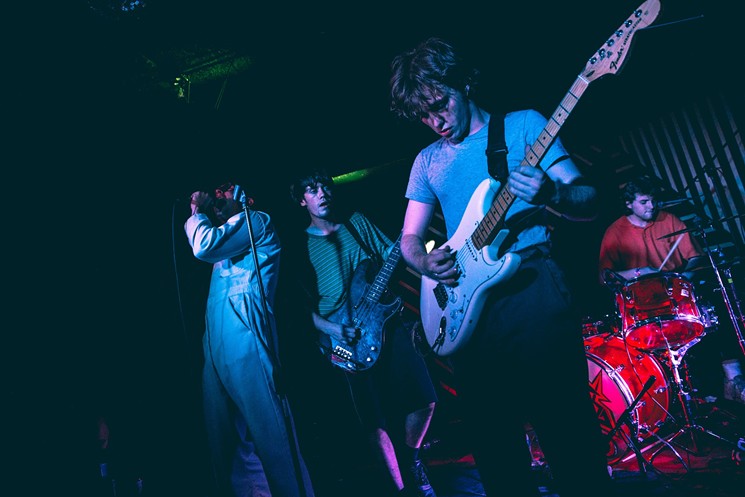 Shame ruled the Houston audience throughout their blistering set.
Photo by Derek Rathbun
Before the beginning of the song "Friction," Steen stated, "this is a dance song, and it's dedicated to that woman pushing back her hair."  The way the band performed the head bopping pace of the song was nothing if not sheer magic. With plenty of intense energy, it was as if the band hadn't been as exhausted as they stated. The band remarked "we don't tolerate abuse at our shows, we want a healthy environment for everyone, now smile; don't take this so seriously."

The ferocity of the song "Lampoon" just added to the crazed energy that the band used up while on stage. As the band played and danced around, sweat dripped from them like a faucet before they launched into a rousing rendition of their song, "Gold Hole." Shaking and quaking with each note, Steen found his way into the audience, singing and moving around while placing an audience member's hat on his head. The energy of the room and the band performing felt like the walls were shaking, before they closed the show off with a crazy and dynamic blast.

Afterward, talking to people after the show, many remarked that the Shame set was the best they'd seen so far in 2018.  It was apparent from start to finish, Shame came with something to prove, and they proved that they were just as intense as we'd all heard.  In just under 45 minutes, Shame made Houston feel lucky enough to witness their energy, while Snail Mail and Bat Fangs set the stage for the incredible night that was to come.