Sum 41: From Past to Present

Tom Thacker, Jason "Cone" McCaslin, Deryck Whibley, Dave Baksh, and Frank Zummo of Sum 41 Photo by Ashley Osborn
Even if you weren't into punk-rock back in the 2000s, there's a good chance you've heard some of the genre's most catchy hits. With the pop-punk scene on the rise early in the decade, ear-candy tunes were not only being played on the radio, but also being used in other forms of media such as the video game Tony Hawk's Pro Skater, as well as a slew of comedy movies like the American Pie series. (Some fans even dubbed the tuneful, signature sound as "American Pie-core")

With the added hype boosting the band to the forefront of punk, Canadian rock group Sum 41 was able to get to No. 10 on Billboard's Top 100 with “In Too Deep” and position themselves at the No. 1 spot with notable anthem “Fat Lip,” both from their 2001 release All Killer No Filler. But the band hasn’t always stuck to the bright, pop punk sound most casual listeners would know them for.

With their latest release, Order In Decline, we get to hear a more finely tuned and much more aggressive Sum 41. The band will be performing on October 23 at White Oak Music Hall in support of their latest album as well as the 15th anniversary of their 2004 album Chuck.

“Yeah, I do think it’s funny,” conveys longtime bassist Jason “Cone” McCaslin, “Because I feel like we’ve done more heavy stuff than poppier stuff in our career overall, but people still think of us as the band that did 'In Too Deep' and 'Fat Lip.' Which is fine, we still love those songs and love playing them, but I think overall we’re a heavier band now, and even those two songs are played heavier during live performances than they were on the original recordings.” 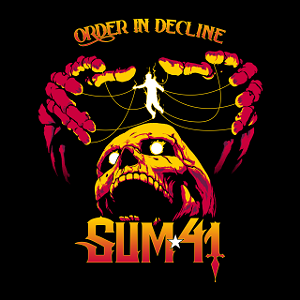 Order In Decline Artwork
Photo courtesy of Hopeless Records
Fast paced tempos and distorted guitar riffs have amped up the intensity of the new material and with the added production of dark tones and effects, the album pushes the band further in their hard-rock direction. Along with the added audible aggression, the group has also revisited its not-often-heard political voice for some of the new tracks. Without directly specifying that the song and lyrics are about President Trump, the single “45” off of the new release’s lyrics and music video imply that the group might not be the biggest supporters of their neighboring country's leader.

“I think lyrically, like on Order In Decline, the topics are heavy and darker, but musically, even if the world was a great place, I think our album would still sound heavy. We like and want to play more aggressive music but as far as the topics and lyrics, that will change from album to album depending on what’s going on in the world, for sure.”


Staying involved with current events around the world, the band has worked to support people in countries that have been struck with war and conflict. In 2004, prior to the release of their third album Chuck, the band traveled to the Democratic Republic of Congo with charity organization WarChild Canada to document the effects of the country’s civil war.

Within days of arriving, gunfights broke out close to the city where the band was staying. As the band members waited for evacuation the gunfights got progressively closer to their hotel with gunshots and mortar strikes going off within blocks of where they were staying. The band members were helped to safety by UN peace-officer Charles “Chuck” Pelleteir and upon returning back home, aptly named their next album after the officer.


“We had never been in an active war zone before,” explains Cone “You learn to understand how unpredictable a war can be. They just start up like that. Cause you know, nothing really bad happened at first, a little gunfight at the border and then it erupted into a full scale war and it just makes you understand what people go though on a day to day basis where they live and it’s terrible. I’ve actually been thinking about it more and more over the months because it keeps coming up in interviews, but there was a period of time where I wanted to not think about it at all because you know it was probably the worst time of my life. Back then I tried to block it out but now I can talk about it. It was a long time ago, but you know if I ever see videos it kind of still gives me chills.”

Before the release of Order In Decline, Chuck was regarded as their heaviest project. Most people attribute the change in sound and the added aggression to the events and experiences that took place in the Congo, however, Cone states that the album had already been completed with the exception of the single “We’re All to Blame.”

“No actually,” Cone clarifies, “we had already recorded the album, then ‘We’re All To Blame’ came out. That was the one song that was made after the Congo. I remember [guitarist and lead singer] Deryck had actually brought his acoustic guitar and was working on the chorus for the song while we where there.”

McCaslin himself credits the change in sound to the bands heightened skill after having toured constantly after their success and release of their first two albums. 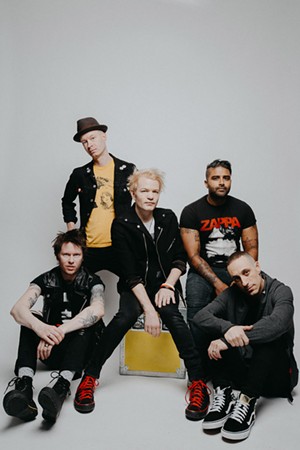 The members of Sum 41
Photo by Ashley Osborn
“I think it was a maturing point musically,” states Cone, “but I honestly think we got better. We had a couple albums by then and started touring the world a lot, so I think we were becoming better musicians. When All Killer No Filler came out we were 21, we recorded it straight out of high school, so I think at that time we were as good as we could be for being teenagers. But once you start going on the road and touring as much as we did, you just become a better band and better musicians, and I think that's why Chuck was how it was, because we had gotten better.

“We wanted to challenge ourselves and do different things. We wanted to add pianos and acoustic guitars, we wanted solos on songs, rippin’ solos! It's stuff we probably couldn't have pulled off three years prior on ‘Killer,’ we weren't that good yet.”

Cone was also recently involved with benefit project Artist for Sudan, being part of a supergroup of 40 Canadian musicians to record a cover of U2’s “Sunday Bloody Sunday” for the country as a protest song for the unheard voices of Sudan.

“There’s another foundation in Canada called Make Music Matter, I do a lot with them as well. They did a benefit song so I played bass on that for them.”

Make Music Matter is partnered with Healing In Harmony to continue the effort in providing aid to children who have been effected by the war in their country.

“Healing In Harmony and War Child, they're pretty active, they go and do it! They go and build schools and anything necessary for the children and teenagers that have gone through war and been through conflict and try and help and rehabilitate them to try and get back to a somewhat normal life and move on.”

Further enforcing their heavy influence, Sum 41 will be bringing two metalcore bands with them along their upcoming tour. Australia’s The Amity Affliction and Ohio's The Plot in You. One dollar from every ticket sale on the tour will go towards War Child in support of their efforts to provide aid to children in countries that have been effected by war.

Sum 41 headlines The Order In Decline Tour at 6 p.m. October 23 at White Oak Music Hall, 2915 N. Main, with The Amity Affliction and The Plot In You. For more information, contact whiteoakmusichall.com or sum41.com $33.50, $38 day of show.
KEEP THE HOUSTON PRESS FREE... Since we started the Houston Press, it has been defined as the free, independent voice of Houston, and we'd like to keep it that way. With local media under siege, it's more important than ever for us to rally support behind funding our local journalism. You can help by participating in our "I Support" program, allowing us to keep offering readers access to our incisive coverage of local news, food and culture with no paywalls.
Make a one-time donation today for as little as $1.