Just in Time For the Super Bowl: Ten New Sports Anthems From the Last Ten Years 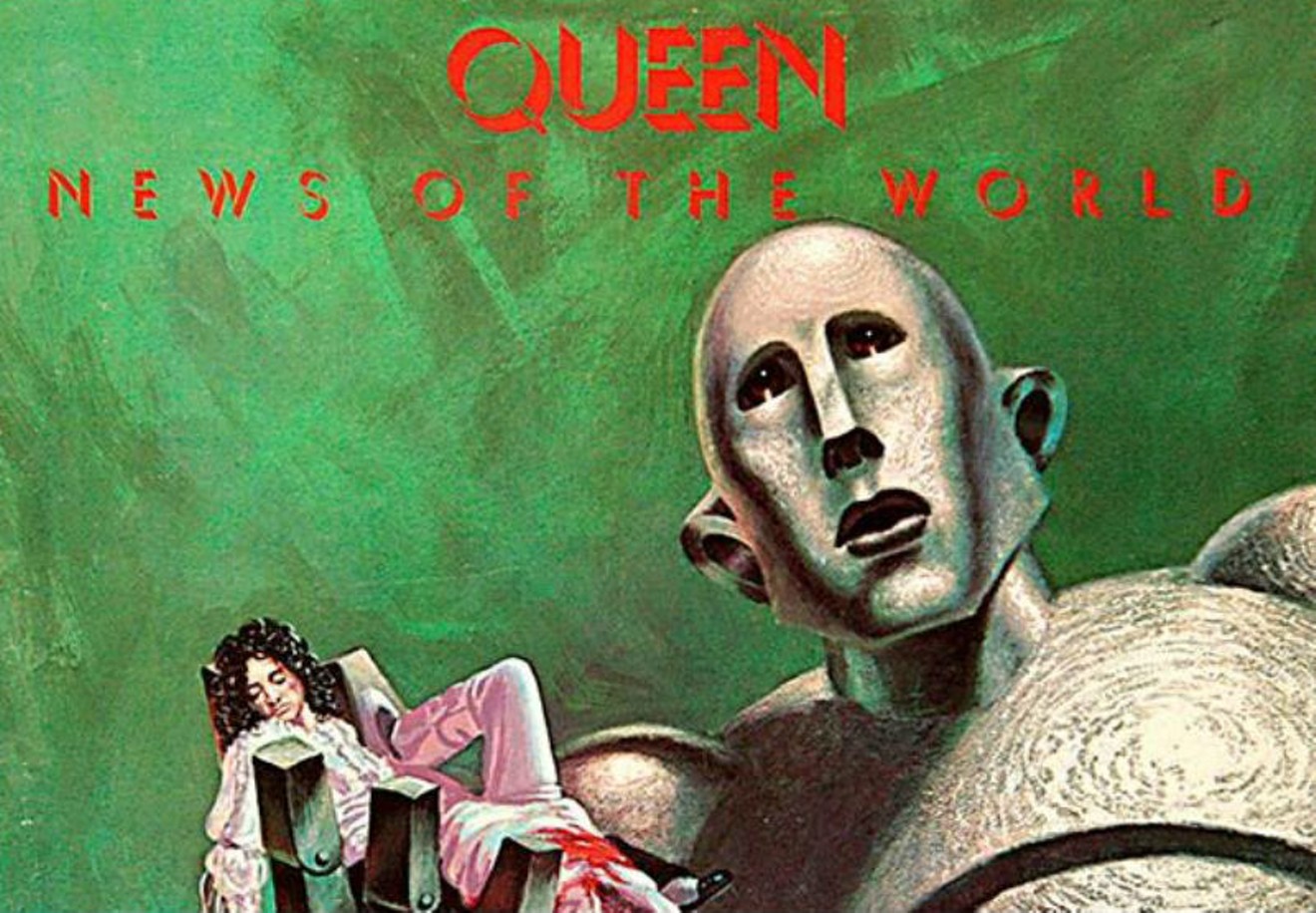 "We Will Rock You," from Queen's News of the World, is the standard stadium anthems aspire to and needs to be retired. Album cover art

We now know the participating teams in the approaching Super Bowl and despite the wailing and gnashing of teeth by football fans who feel caught in a Groundhog Day-like hell, it's once again Tom Brady's New England Patriots representing the AFC. They'll be pitted against the Los Angeles Rams who are very deserving, depending on whom you ask and whether they live anywhere near the Pelican State.

In light of the zany championship games which thrust these squads into the big game, there's no telling what will happen when these combatants square off next Sunday, but we do know this: people in the stands at Atlanta's Mercedes-Benz Stadium are going to cheer and when they do there will likely be music soundtracking their rally cries. And, especially in a year that saw Queen enjoy a resurgence in popularity, expect to hear lots of "We Will Rock You." It's long been regarded the greatest stadium anthem of all time, and rightly so. But just like pro football needs a new dynasty to replace the Pats (sorry, Tom), we need some fresh musical choices for cheering. We reached back into the recent past (last ten years) to see what songs might be the next "Rock 'n' Roll (Part 2)", the replacement for "Seven Nation Army," the future "We Will Rock You." Here are some candidates:

Cardi B is the hip-hop artist of the moment, but does she have a timeless stadium hit with "I Like It"? Maybe. The Rodeo Houston-ready star had an instant classic with this trap/salsa banger which extrapolates a familiar refrain from a 1960s song. The titular line repeats itself in that "We Will Rock You" fashion fans love and the sentiment is uber-appropriate for big plays and game-winning drives.

The song is about doing your best for personal pride and not for a shiny prize at the end of the endeavor and the whole point of team sports is pursuing a cup or a belt or a trophy which forever immortalizes the group's dominance. In this argument, the lyrics are toss-away anyway because the main reason to play "Trophies" at a football game is to hear that trumpet hook, a sound that makes you puff your chest out a little and dig in a little harder. It's perfect for a pro football setting because it sounds as if it was lifted straight from those old NFL Films recaps.

Fitz and the Tantrums, "HandClap"

You only need a little imagination for this one, so picture this: your favorite wide receiver (let's call him DeAndre Hopkins) nabs the ball one-handed between three defenders for a huge gain; or, maybe your favorite NBA star (let's call him James Harden) makes a sick, ankle-breaking move that leaves his defender on the hardwood as he swoops to the hoop; or, possibly your favorite footballer (let's call her Rachel Daly) bends it like Beckham for a go-ahead goal. Who among any of these athletes would not wish to hear the whole stadium handclap on Fitz and the Tantrums' command to honor their athletic brilliance? A no brainer.

This new track from longtime Swedish heavy metal act In Flames (headed for House of Blues Houston February 12) features the band's trademark gnarly riffs, soaring solos and melodic vocals, plus lyrics about not backing down and joining the fight, the kind of stuff coaches love to pin to team bulletin boards. All of that is sandwiched between an opening and closing chant of "This is the fight, the fight for our lives, Scream out loud, this is our house!" making it the perfect song for the home team.

Los Angeles ska band The Interrupters (slated for a March 2 show at Warehouse Live) released a breakthrough album last year and its title is Fight the Good Fight, so it's no surprise that a couple of songs from it play like Knute Rockne telling his team to "win one for the Gipper." The standout in that vein is the opening track, "Title Holder." Vocalist Aimee Allen implores listeners to "stand like a champion" and "live like a warrior." These cheers are set to that heavy, heavy monster sound that could get face-painted football fans skanking in their appointed stadium rows.

We're not going to paste together a list of anthemic songs and not include K.Dot. Lamar's moving songs inspire and maybe deserve better than to serve as background music for belligerent football fans who had too much Fireball on the tailgate parking lot ("Pour up, drank" to quote Lamar). But "Alright" would be a good choice for those moments when it's uncertain the championship trophy will actually make it to your favorite team's planned parade. The chorus, "We gon' be alright," is assuring, especially when the game is coming down to the wire.

"Can't Hold Us" is the one song on this list we are sure is already in play at stadiums everywhere and it's a sports anthem if ever there was one. The urgent beat sounds like 70,000 fans thumping their stadium seats in unison, all to motivate their sports heroes. It's got inspirational sing-along lines like "this is the moment" and "we'll fight 'til it's over." You can hardly get more sis-boom-bah than that (side note: the line about how the ceiling can't hold us makes this song inappropriate for Houston Texans use, as the roof at NRG Stadium is eternally sealed shut and firmly in place).

This catchy tune from obscure (and defunct?) Pennsylvania ska punk act No Service Project fits the bill for many reasons. For one, the chorus is a chant of "Kick, kick, kick,..." that rises like cheering fans from their appointed seats. Also, the song is about reaching for and achieving your dreams, a.k.a winning. Three Super Bowls have been decided by game-winning field goals and with two scoring juggernauts competing, we may have a fourth next Sunday. "Kick" would be the perfect song to accompany the game-winning fireworks and confetti in that instance.Also, it'd be a great replacement for those "olé" chants at soccer stadiums world-over.

SonReal's "No Warm Up" is replete with braggadocious (and clever) lines like "I'm David Blaine on mushrooms,
so this shit right here, this gon' make me levitate right 'bove you" and "I can't miss, so I'm putting with my five iron" (a nice line for Pebble Beach, we suppose). The Canadian rapper's ode to the extra-confident is perfect for those athletes who can do it all, "First try, no warm up."  There are some oh-oh-oh's for fans to sing along to from the seats, too.  Watching the video for "No Warm Up" shows SonReal doesn't take himself too seriously, a lesson some pro athletes and many, many sports fans could learn from.

Lots of one-time NFL fans turned their backs on the league in the aftermath of the Colin Kaepernick saga; but, legendary Houston rapper Z-Ro did more than that by penning this vitriolic call-out of the football organization and systemic racism. The song would never get clearance to erupt over any pro football stadium's loudspeakers, but it would be a Vesuvian eruption were someone to go rogue and played it for an arena filled with unsuspecting fans. They might be lured in by the repeated "Kneel Down" chorus, which suggests sports dominance and never know they were listening to a protest song.
KEEP THE HOUSTON PRESS FREE... Since we started the Houston Press, it has been defined as the free, independent voice of Houston, and we'd like to keep it that way. With local media under siege, it's more important than ever for us to rally support behind funding our local journalism. You can help by participating in our "I Support" program, allowing us to keep offering readers access to our incisive coverage of local news, food and culture with no paywalls.
Make a one-time donation today for as little as $1.