Thanks to the efforts of producer John Lomax III, sessions recorded by guitarist Rocky Hill in Houston in 1977 have finally been released as Houston Blues Throwdown. Detail from Texas Shuffle album cover
Shoulda, coulda, woulda.

That pithy phrase accurately summarizes the career (and life) of guitarist Rocky Hill. Seemingly destined for fame, he blew multiple opportunities and ended up only a memory in the minds of those who frequented Texas blues clubs decades ago.

Hill didn’t record much, but a newly released album, Houston Blues Throwdown, helps to explain why he was considered by many to be the Next Big Thing. Recorded in Houston in 1977 and produced by his then-manager John Lomax III, the sessions were never really intended for release. Rather, they were a warm-up for an album that was eventually released in 2012 as Lone Star Legend. 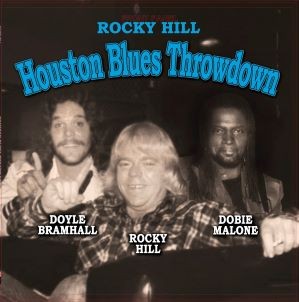 Album cover
Born and raised in Dallas, Hill began making a name for himself in the late ‘60s with American Blues, which included his younger brother Dusty Hill on bass and Frank Beard on drums. The band’s gimmick was to dye their hair blue. It has been said that the latter two musicians found their subsequent teaming with Billy Gibbons in ZZ Top to be an attractive prospect tonsorially as well as musically, after months of turning pillowcases, chairs, car seats, and clothing a distinctive shade of indigo.

Following the breakup of American Blues, Hill soldiered on, backing blues masters Lightnin’ Hopkins, John Lee Hooker, Freddie King, and Jimmy Reed, later attempting a solo career in fits and starts. Years of excess left him in poor health, and Hill died in 2009 at the age of 62.

“The sessions that resulted in Houston Blues Throwdown were actually just for me to just to see if Rocky was together enough to go up to Dallas and for me to rent a 24-track studio and pay these high-dollar session guys and all that,” Lomax recalls. “I just wanted to see if he was straight enough to pull it off.”

Lomax booked two nights at Houston’s Bickley Studios, a facility that would later become the Red Shack Recording Studio under the ownership of Rock Romano (Dr. Rockit, The Natives, The Fun and Games). At the time, Bickley was an 8-track facility and more affordable than a 24-track studio. Doyle Bramhall, a drummer and songwriter who later penned some of Stevie Ray Vaughan’s hits, played drums, and the rhythm section was rounded out by bassist Dobie Malone, whose claim to fame was his appearance on the hit single “Tighten Up” by Archie Bell and the Drells.

The sessions went well, and it was off to the Dallas / Fort Worth metroplex (specifically Garland, as things turned out) and Autumn Sound, a studio where Willie Nelson had recorded Red Headed Stranger a couple of years before. After a bit of personnel shuffling, members of Delbert McClinton’s band were recruited, and work began in earnest. All seemed to be going well. Until it wasn’t.

Dusty Hill, Frank Beard, and Rocky Hill were American Blues. After the band split up, Dusty and Frank joined Billy Gibbons to form ZZ Top.
Public Domain
“He was just determined, somehow, to fuck his own career up. It’s so sad, because his talent was monumental, but he had very little common sense. There were stories from all over the country about people he had screwed over at one time or another,” Lomax says.

“We got eight sides recorded and threw up a rough mix,” Lomax remembers, “and then Rocky bolted and dumped on us and left us holding the bag. He went off and signed a new deal with Bill Ham (then manager of ZZ Top), who he said he would never work with again. If I’d have had any sense at all, I would have told Rocky to screw himself and hired on with Doyle Bramhall instead, who was not nearly so crazy.”

“He was just determined, somehow, to fuck his own career up."

At the time, Lomax was also managing Texas singer-songwriter Townes Van Zandt, an artist whose character could be (charitably speaking) just as mercurial as Hill’s. So Lomax knew crazy. Did he feel betrayed by Hill’s sudden departure?

“I was furious,” Lomax says. “He just dumped us. Not only that, he stole the master tapes! I never did get the masters back. We made Lone Star Legend from a rough-mix cassette. That’s all we had to work from.” 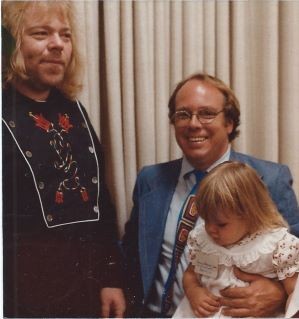 Rocky Hill, John Lomax III, and Amanda Margaret Lomax during happier times.
Photo courtesy of John Lomax III
Ultimately, Lomax’s associations with Hill and Van Zandt did not end well, at least for Lomax, whose inexperience may have worked against him.  “It was a sad thing for me, because my career would have gone in a different direction had that all not happened,” Lomax says. “I didn’t know shit about managing people. I just loved their music and thought other people ought to hear it.”

During that wild and wooly era, it was not uncommon — and many would say that it’s still not — to encounter behavior in the music industry that might be considered ethically questionable if not outright illegal. “Huey Meaux? Hello?” Lomax chuckles, recalling the infamous record producer (known as “The Crazy Cajun”) who worked with The Sir Douglas Quintet (“She’s About a Mover”), Roy Head (”Treat Her Right”), and Freddy Fender (“Wasted Days and Wasted Nights”) among others. “He knew all the tricks,” Lomax recalls. “Huey said something to me once, he said, ‘I don’t know why they’re all after me. All I did was take a teenage crack whore across state lines. Who has not?’”

It wasn’t until years later that Lomax was able to return to the Houston sessions recorded in 1977. “The reason this sat for so long was that I was angry with Rocky, and because I didn’t realize Houston Blues Throwdown was as good as it was. For a long time, I couldn’t find the 8-track masters. I finally found them and got them digitized and listened back and went, ‘Oh, this is all right.’”
Hill’s actions may have frequently been questioned, but his talent rarely was. What does Lomax consider Hill’s greatest attributes as a guitarist? “Strength,” he said. “And skill. He got his tone and his signature technique from brute strength. He would use really, really, really thick strings and run them high up off the neck. So he had more string play than most people, plus he was strong enough to bend these things. And he had this knowledge of the blues that was just staggering, that he had sort of absorbed over the years."

Lomax continues, “He had this whole encyclopedia of blues licks built into himself, and then he added his own style, and he put that all together with this ability to create sounds that most people couldn’t make without having all sorts of pedals and effects.”
Working with Bill Mecke, the owner of Record Town Music in Fort Worth, Lomax has successfully shepherded the recent release of Houston Blues Throwdown, now available on vinyl in a variety of colors. Listeners wishing to return to those thrilling days of blues yesteryear can order the album through the Record Town website and see what the fuss was all about.
KEEP THE HOUSTON PRESS FREE... Since we started the Houston Press, it has been defined as the free, independent voice of Houston, and we'd like to keep it that way. With local media under siege, it's more important than ever for us to rally support behind funding our local journalism. You can help by participating in our "I Support" program, allowing us to keep offering readers access to our incisive coverage of local news, food and culture with no paywalls.
Make a one-time donation today for as little as $1.