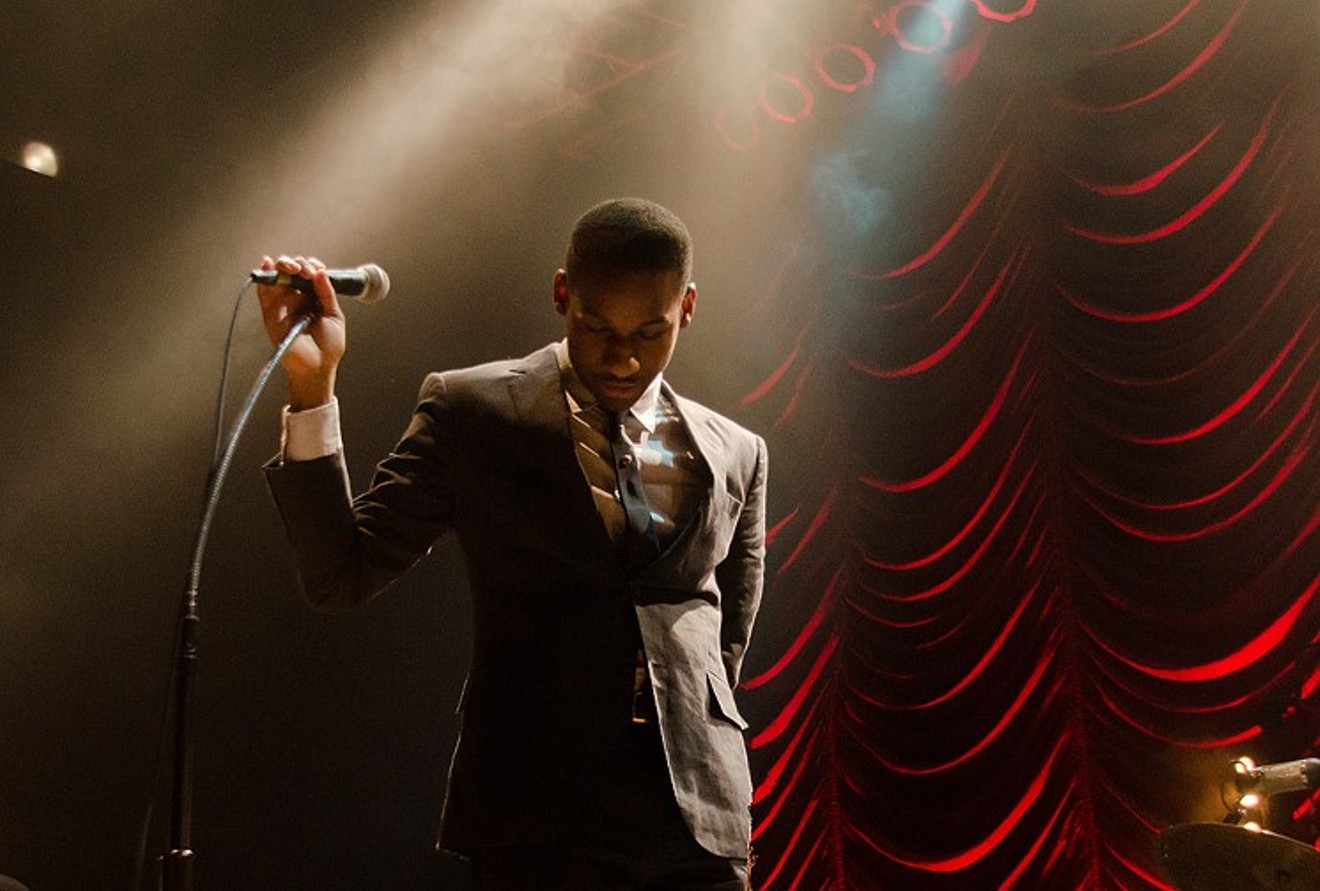 You damn right we're excited to see Leon Bridges at the Rodeo. Photo by Christi Vest
If the first weekend of 2018 is any indication, Houston’s concert future looks bright. With the power duo of Big Freedia and Boyfriend opening things up and Carly Rae Jepsen (who was kind enough to take Katy Perry on the road with her) shutting them down, it was a mighty fine time for Houston music fans. Those good times are going to continue over the rest of the year.

As time goes on, more shows will be announced, tickets will be purchased and waits will begin. There will be plenty to freak out about. For now, these are the shows I have circled on my calendar.
Giant Kitty
January 26, House of Blues
Giant Kitty one of the best acts in Houston, in addition to being a former Best of Houston winner for Best Band Name. This show celebrates the release of their new album Rampage, which we have high hopes for, and has a killer undercard featuring Only Beast and Miears, with Nyx Laraye playing host for the night. If you’re looking for 100 percent, take-no-crap riot grrrl release, Giant Kitty is your band.

Anytime Eric Prydz graces Houston is a reason to celebrate. One of the best DJs in the world, Prydz has been in the game for nearly 20 years, and is a master of not just crowd control but drawing real emotion out of a dance music set. There’s a lot of EDM in store for Houston this year, but this show may plant its flag as the best early in 2018.
Garth Brooks
February 27/March 18, NRG Stadium,
It’s not just Garth Brooks, it’s not just Garth Brooks returning to Houston, it’s Garth Brooks returning to RODEOHOUSTON. Listen, tickets for both these shows sold out in under an hour, and unless something completely unexpected and mind-blowing gets booked out of the blue these are going to be the concert events of the year. Plus, the second show features the RODEOHOUSTON Super Shootout. Show up early, enjoy some rodeo, sing “Friends in Low Places.” It’ll be a good day.

Leon Bridges
March 2, NRG Stadium
Can you believe that there are people upset that Leon Bridges is headed to RODEOHOUSTON? One of the most talented musicians in the state, Leon Bridges might have a throwback sound, but he just proves that some sounds, in the right hands, transcend the era they were born in. Be mad that RODEOHOUSTON didn’t book someone you wanted to see, but don’t look like a fool by hating on Leon.
Lorde
March 19, Toyota Center
The wait is over: Lorde finally returns to Houston after her FPSF set was cut short due to Houston weather doing Houston weather things. While between then and now she’s found herself in a little bit of controversy, I suspect that her fans are still in her corner and looking forward to finally jamming “Green Light” live.

In Bloom Music Festival
March 24, Eleanor Tinsley Park
March starts with a rodeo and ends with a festival, making it easily the biggest music month of 2018. Lots of people have lots of feelings about In Bloom, and I expect there to be plenty of think pieces spinning out of the festival and what it means to the city once it happens… if the weather places nice, of course. Independent of everything else, you’ve got to admit the local artist section of the lineup is stacked.
Foo Fighters
April 19, The Cynthia Woods Mitchell Pavilion
Do you remember the last time Foo Fighters headlined a touring show in Houston? That’s not a setup for a joke, I’m genuinely curious because it feels like it’s been forever since Dave Grohl and company arrived in town on a tour of their own. Think of all the hits the band has yet to play in Houston. It will also right the wrong of Nickelback being the last band to play “Everlong” on the Pavilion stage.

The Residents
May 1, Warehouse LIve
Listen, I know, the world is full of performance artists and art collectives that you don’t care about, but by God, any time you get a chance to see a group like The Residents you take it because you never know if you’ll ever get the chance again. There’s no way you see a weirder show this year.
Harry Styles
June 7, Toyota Center

2018, like every year, is full of pop stars big and bigger hitting the Toyota Center with their touring extravaganzas. That said, I’m not sure there is one with a better lineup this year than the duo of Harry Styles and country wonder Kacey Musgraves. Styles, formerly of One Direction, could have padded the lineup with acts that no one cares about, but that he’s introducing his legion of fans to quality music makes him an even bigger star in my eyes.

Taylor Swift
September 29, NRG Stadium
As much as I would love to talk about so many other shows, including that potentially very interesting “Weird” Al deep cuts tour, it would be irresponsible of me as a music writer to ignore a show by the best selling artist in the county. Yes, Taylor Swift returns to Houston bigger than ever with a show hopefully to match. What do you think the odds are that she plays “All Too Well” on this tour? I’ll be keeping my fingers crossed until then.