There's always something to press play on here. Image by David Garrick

The second installment of Singles Club this year is here and it's a doozy. Aside from the fact that two of the tracks listed were released this year, it's also a list of bangers that are as eclectic as our city itself. Starting off with a new banger from Guilla featuring Sobe Lash, a pop jam from Jerk, a chillwave gem from Get A Life, an intense tune from Le Chien Freud, and a soulful rocker from The Side Charms. While we appreciate you reading up on these artists as well as subscribing to this playlist, we remind you that purchasing their music and paying to see them perform will keep the great songs coming.

Guilla is back stronger than ever with multiple releases this year.
Photo by Michael Starghill
When you look to artists who put in plenty of hard work, Houston's Guilla is one who definitely fits that description. Ever since hearing his release Rap, Trap, and Drums, his inventive style and strong mike skills have only gotten better. The rapper has really taken his high energy skill set to new places on the new track "Sorry." Featuring a vocal from Sobe Lash, Guilla proves he can keep the party going strong while dropping a jam that has plenty of pop without overshadowing what he can do with a microphone. You can purchase Guilla's music in record shops throughout Houston, at his live shows, or through his Bandcamp page.

If you're going to make an album where you play all of the instruments, you can't get much better than Houston's Jerk. Led by Austin Smith, this band proves that there's plenty of snap with how some artists make their music. On their debut self-titled release Jerk, the three piece take the chill jam to a whole new place. While every track on the album is amazing, the song "Accidents" might be the best foot forward. Full of Smith's relaxed vocal style with plenty of pop overtones, the song makes you want to get down whenever you play it. You can purchase Jerk's music directly from them at their Bandcamp page.

The Mind of Chase DeMaster isn't wasted with Get A Life.
Photo by Daniel Jackson
The Houston music scene is made up of many players, but there isn't one who has as much going on as Chase DeMaster. Owner of the label Very Jazzed, member of multiple groups, and classically trained musician, DeMaster fronts this tongue in cheek group called Get A Life that's worth checking out. With a "who cares" attitude, the band takes everything that millenials are known for, and throws that into their music. Their song "What You Deserve" is a true banger from start to finish that mixes electronica and rock like you've never heard, and makes you excited for their full length due later this year. The song takes twists and turns while holding your attention from the start, which is something few bands of this style can do as easily as they do. You can purchase music from them through the Very Jazzed website, or through the group's Bandcamp page.

Bands get on our radar that might not be the most popular ones, but have some of the most inventive music that's coming out today. That's how it goes with Le Chien Freud. Named after Dr Freud's son, this Houston three piece makes music that's a little abrasive, disjointed, and chaotic without losing your attention. On their album Sarcasm Is Trying, they mix the intensity of acts like Bring Back The Guns and the math sounds of June of 44 to craft their own sound. This is most present on their track "I Don't Think Bryan Is Going to Be in the Band Anymore," where they take what you thought you knew about crazed sounds and make them catchy. You can purchase their music from them when they play a set, from most record shops throughout the city, or from their Bandcamp. 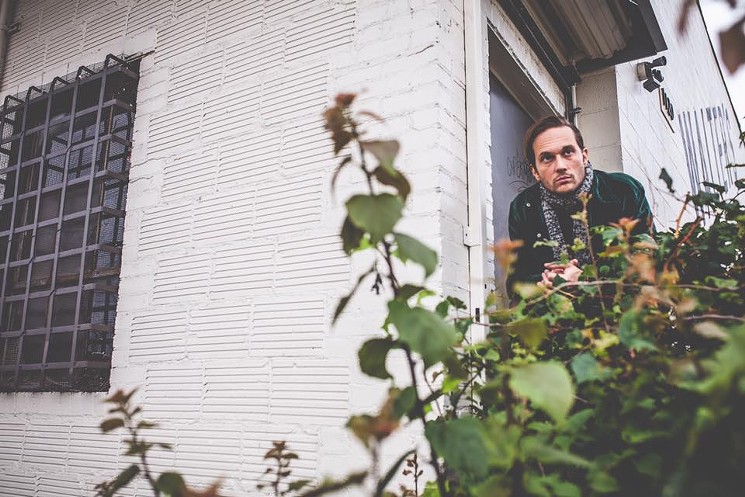 Houston's Chase Hamblin leads new group, The Side Charms.
Photo by Daniel Jackson
You probably don't know the new band The Side Charms, because they literally just started playing. What you should know is that before leaving Houston for New York, local mainstay Chase Hamblin put this group together to show off his newest songwriting style. What's emerged is a sound that's hard not to like with their lead single "Going On." While you could say that Hamblin can write music for a funeral and it'd still sound amazing, it's easy to see why he's one of the best songwriters around with this track. Taking the soulful sounds of the past and mixing them with electronics and guitar hooks, Hamblin and company give you plenty of hope for what they have in-store in the future. You can purchase music from The Side Charms on all digital platforms, including through their Bandcamp page.

That's what's in the club for this week. Please remember that this week's additions begin with track number 46, and to subscribe to this playlist so you can hear these songs as soon as they're added.