The Art Car Experience Welcomes Houstonians back to an Eclectic World

“Houston! You got to give us some time because we are fucking rusty,” says a laughing Felipe Galvan as he stands, beer in hand, center stage in front of the crowd. People scream as he leads his band, Los Skarnales, into the next song of the night. The music starts and the audience, some dressed as different characters from fantasy novels and movies, jump in approval.  A man in a silver metallic suit reaches inside of his pocket and flips a switch causing his whole body to illuminate with blinking Christmas tree lights.

“Hey! Everybody stop! This is important!” yells Galvan as everyone quiets down to listen to his serious tone. “It is every parent's responsibility to make sure that ALL children know The Ramones!”

The crowd erupts into dance as the lights flash and the band plays while in the distance people walk amongst rows and rows of eclectic automobiles.

The Art Car Experience powered by the Orange Show Center for the Visionary Arts kicked off Friday with Tomar & The FCS and Bayou City Funk and continued Saturday night with The Suffers and Los Skarnales. The four acts headlining two nights welcomed Houstonians back to live music and entertainment. The first two days, divided up into Art Car Experience by Day and Art Car Experience by night, had fans of the 34-year-old festival marveling at the eclectic vehicles and art pieces.

Due to COVID the parade did not occur this last year so instead, artists and fans walked past rows of cars and paused as huge pieces of art walked past them. Whether it was Art Car Classics like the Roachester, a car built to look like a giant roach, or newcomers like the Saint Arnold’s caddy and The Black Panther fans of the festival got to see art and ingenuity on display.

Los Skarnales shook off the cobwebs and got crowd members on their feet.
Photo by DeVaughn Douglas
Ken Hoge, who created the piece “Rhinestone Catboy” is just happy to be out among people again.

“I was privileged enough to include my art car for the third year and if we can’t parade at least we get to display our cars at this beautifully organized event. After a year of very carefully following CDC guidelines, because I believe in science as well as art," he winks as he laughs and looks around the festival. "It’s good to get out and see all of your friends and family.”

The day had attendees eating from food trucks on site and walking through the maze of art pieces.  At night the sky lit up with the flashing lights found in many of the cars. Many of the artists displayed work that had been waiting for well over a year to see the light of day. It’s an opportunity that Mark “Scrapdaddy” Bradford has been waiting for given the cancelation of last year.

“I’ve been doing this for well over 30 years and it really gives artists a chance to showcase their work. It’s been three years since I drove this piece,” he exclaims as he points at the hulking metallic artwork with elements of a bicycle and a spider. “I’m just happy we can finally get out again and I’m thankful for the opportunity."

While the parade didn’t happen in its usual way, The Orange Show was able to create an experience on its campus located off the Gulf Freeway and there are plans to bring even more events to the area. 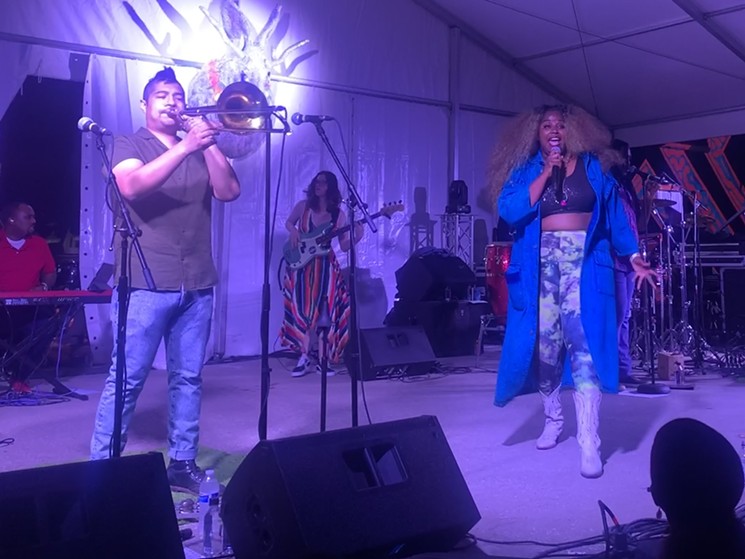 The Suffers debut new music for fans that came out to the Art Car Experience at Night
Photo by DeVaughn Douglas
“When my father died in 2000, they wanted to name a park after him and that’s where we are standing now. This is Smither Park,” says Ashley Smither Langley as she points at some of the sculptures and murals that adorn the park. “Right now, a lot of it is shale but soon we will break ground and expand the artwork to go all around the park. There are over 300 artists that have been involved in the creation of the art her and there are going to be a lot more. There is going to be a lot more events and a lot more art.”

If Saturday was any indication, Houstonians have a lot to look forward to with the crowd jumping to their feet as The Suffers closed out the night. Kam Franklin commanded the stage as the band ran through a few hits and then went into tracks from their upcoming, unreleased album.

“How many of y’all have been waiting to get back out and just be drunk and dance,” she laughed as the band cued up the next song. “On the count of three I want you to yell the first place you’re traveling to once thigs get back to normal. One…two…THREE!”

The Suffers played into the night as concert goers yelled out a mix mash of destinations into the night sky.
KEEP THE HOUSTON PRESS FREE... Since we started the Houston Press, it has been defined as the free, independent voice of Houston, and we'd like to keep it that way. With local media under siege, it's more important than ever for us to rally support behind funding our local journalism. You can help by participating in our "I Support" program, allowing us to keep offering readers access to our incisive coverage of local news, food and culture with no paywalls.
Make a one-time donation today for as little as $1.