These Songs Perfectly Sum Up Your World Champion Astros 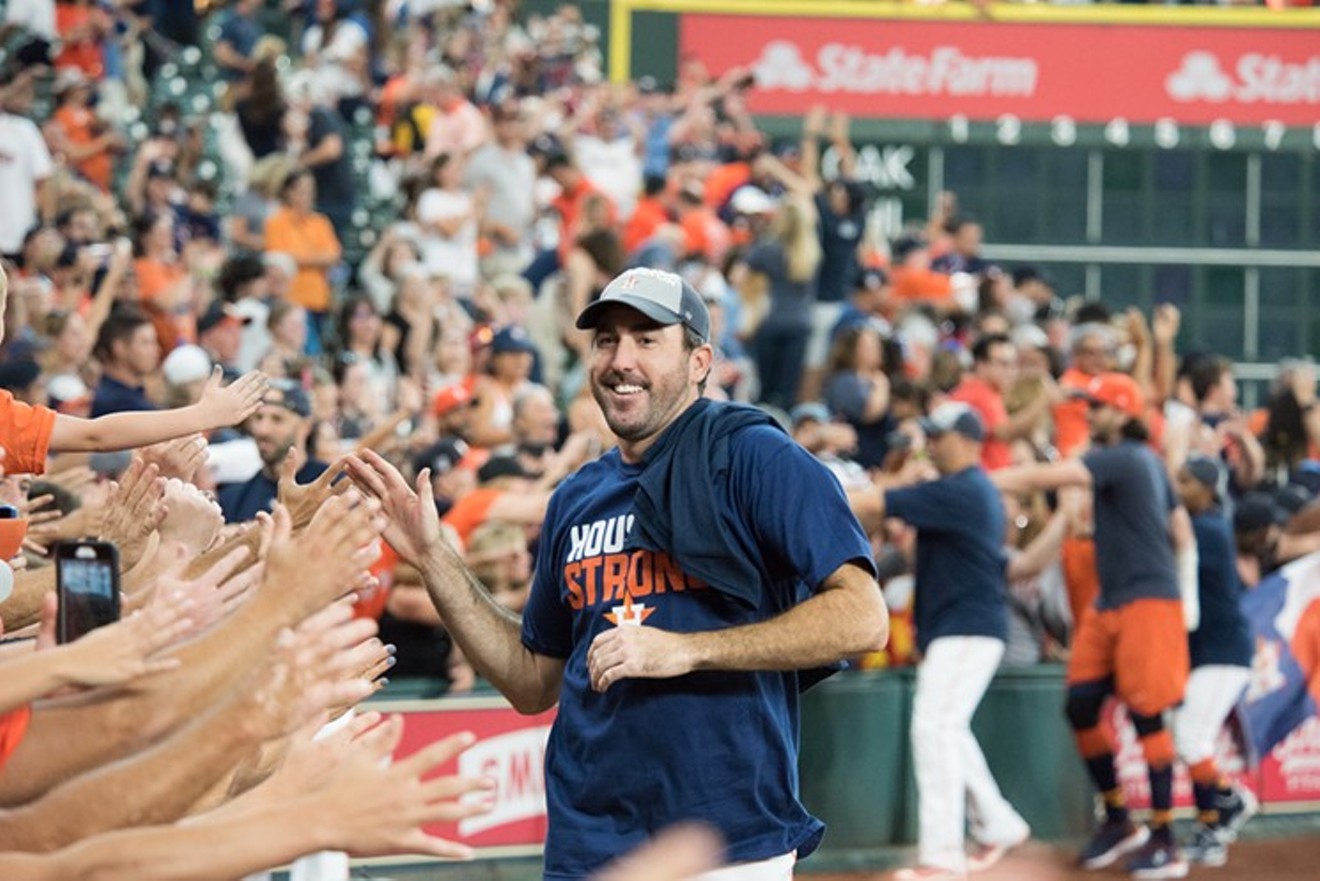 Some music appropriate for the champs. Photo by Jack Gorman
It’s a great time to be a Houston sports fan. Not only do the Rockets hold the best record in basketball, but the Texans – assuming DeShaun Watson returns to full health – may very well make some noise this upcoming season.

Most importantly, however, is the fact that Houston is home to the world champion Astros, who reeled off one of the more thrilling postseason runs last fall en route to the franchise’s first World Series title. The Astros unveiled their world championship pennant during last night’s home opener, and the team will be presented its championship rings during tonight’s game against Baltimore.

Now, it stands to reason that music will play during the proceedings involving the presentation of the championship rings. With that in mind, we have a few suggestions as to which songs should play as Altuve, Correa, Verlander and the rest of the World Series champions get their rings.

DAVID BOWIE, ‘HEROES’
The term “hero” gets thrown around all too frequently, particularly as it pertains to the world of professional sports. But this Astros team, man, this team was different. In the wake of Hurricane Harvey, the Astros gave Houstonians something to believe in. No, the franchise’s first World Series championship didn’t diminish the impact of Harvey, nor did it magically fix the billions of dollars in property damage, which will impact Houston for years to come. However, for a few weeks in October, the Astros provided something that was quite necessary in the aftermath of Harvey – a welcome distraction.

DRAKE, ‘STARTED FROM THE BOTTOM’
Remember the 2011-2013 Houston Astros, aka, the Carlos Lee era? If so, you’ve probably tried to forget a team that won a grand total of 162 games over a three-year span (for perspective’s sake, last year’s Astros team won 112 games, including playoffs) and finished no fewer than 37.5 games out of first place. Hell, the franchise was so bad that when the Astros finished 70-92 and 28 games out of first in 2014, this was considered marked improvement. But it was all by design, under the leadership of GM Jeff Luhnow, who took the job in late 2011. Luhnow shed high-priced contracts and stockpiled draft picks, which resulted in the likes of Carlos Correa, Lance McCullers and Alex Bregman, all of which played a crucial role in last season’s world championship run. Started from the bottom, now we here? Yes, indeed, Houston.

EMINEM, ‘LOSE YOURSELF’
Not only does this track simply amp the hell out of people, making it fitting for a championship ring celebration, but it aptly sums up what it’s like for someone to make the most of their one opportunity. After all, for all the talent this Astros team possesses, there’s no guarantee they’ll ever get back to a World Series. Instead, this team full of young studs (and Justin Verlander, a veteran stud) got their shot at the title and made the most of it. Need proof? Just watch the replay of World Series Game 5.

TRAVIS MEADOWS, ‘UNDERDOGS’
It's likely this is the only song on this list with which you’re unfamiliar, and that makes sense, since Meadows – who has worked with the likes of Eric Church and Jake Owen – is more known for his songwriting than his singing. But, seriously, give this song a listen and tell me it doesn’t sum up both the Astros and the city from which they came. Hardscrabble. Tough. Relentless. That’s Houston, and that is the Astros.

‘NEW YORK, NEW YORK’/’I LOVE L.A.’/ANYTHING BY DROPKICK MUPRHYS
It could be argued that the three biggest “name brand” franchises in Major League Baseball are the Boston Red Sox, New York Yankees and Los Angeles Dodgers. So it was all the more satisfying that the hometown team took out those three proud, storied organizations in succession – including a pair of seven-game thrillers – on their way to a World Series title.

QUEEN, ‘WE ARE THE CHAMPIONS’
Is it generic? Yes. Is it played out? Oh, without question. Nevertheless, as this song played throughout bars across the city on the night of November 1, 2017, it’s doubtful anyone decked out in Astros colors really cared much at all.