Styx Continue Their "Mission" into the Future Styx today: Chuck Panozzo, Ricky Phillips, Todd Sucherman, Tommy Shaw, James "JY" Young, and Lawrence Gowan. Photo by Rick Diamond/Courtesyof ABC-PR
There have been hundreds of classic rock hits over the years. And some of them have even been smash hits. But only a handful could be considered Real Anthems. Think “Stairway to Heaven,” “Freebird,” “Hotel California,” or “Comfortably Numb.”

Another member of that exclusive club is “Come Sail Away.” The lead single from Styx’s 1977 album The Grand Illusion is an instant stand-up-from-your-seat fist pumper and arguably their best known number. But as guitarist/singer James “JY” Young explains, songwriter Dennis DeYoung’s original lyrical trip was of a strictly nautical nature.

“Dennis was writing about a sailing ship. I have a degree in Mechanical and Aerospace Engineering from the Illinois Institute of Technology, and that came in [handy] when I suggested that it turn into a spaceship at the end of the song. Then we had the delightful irony and timing that it came out the same year as Star Wars and Close Encounters of the Third Kind. And that sort of ‘Year of Space’ helped propel the song.”


The band’s extraterrestrial theme has continued with their most recent album, 2017’s The Mission. A concept record about a manned flight to Mars and the crew that pilots the spacecraft, it was well-received by fans and at least two numbers (“Gone Gone Gone” and “Radio Silence”) still regularly appear in their set. NASA fan Shaw even consulted with people at the agency in writing the record.

“You want to slowly introduce the crowd to something you think they might respond to with new material. But it’s impossible today to get traction from radio for any new music from bands in our genre and age bracket,” Young says.

Styx will play a longer-than-usual set of big hits and deep cuts with two hour-long sets (with a brief intermission) on October 3 at the Smart Financial Centre. The band’s self-titled debut came out in 1972, and Young is the only member who has been there from Day One.

The current lineup also includes classic member Tommy Shaw (lead vocals/guitar), Lawrence Gowan (lead vocals/keyboards), Todd Sucherman (drums), and Ricky Phillips (bass). When his health permits, original/classic bassist Chuck Panozzo will frequently drop in to play on the last few songs of the evening. Young calls it “the best live incarnation of Styx to ever take the stage.” And he says that despite their decades-long run, every show includes a healthy selection of new fans.


“The amazing thing is that you’d think our audience is all past 50 and have seen us many times over the years,” he says. “But Tommy does an unscientific survey at shows for people who have never seen us before. And that number is growing, so people are discovering our music somehow. It’s all on social media, and you don’t have to hunt for things like you used to. But there are a lot of guys who used to work in record sales that are out of a job now.”

Of course, many of those older fans also saw the band with lead singer/keyboardist Dennis DeYoung. And though he was kicked out of the band more than 20 years ago, his presence still looms large. It got a little larger when the current lineup added the DeYoung-penned massive hit “Mr. Roboto” to the set list only last year.

The band and DeYoung traded fresh barbs and commentary about the move using Facebook, Billboard, and PR statements as avenues of communication. The 72-year-old DeYoung (who has consistently toured as a solo act) still holds out some hope for a final reunion live journey that the 69-year-old Young and 66-year-old Shaw have shown zero interest in pursuing. Some fans have also taken sides. 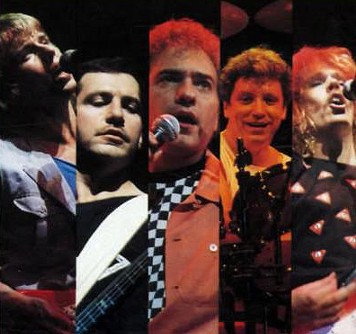 Classic Styx: Tommy Shaw, Chuck Panozzo, Dennis DeYoung, John Panozzo, James "JY" Young
Record cover detail
Young says the reason behind the addition of the song (for which opinions of range wildly) is simple: People wanted to hear it. And everyone from the band’s merch guy to their lighting director would report fans leaving the show voicing their disappointment at not hearing “Mr. Roboto.” Young had also recently heard some versions done by younger bands that toned down the synthesizers and turned up the guitar, which was literal music to his ears.

“That was a song and album [Kilroy Was Here] and project [the concept-driven tour featured band members with dramatic speaking roles] that sort of broke up the band with its lack of success after its creator thought it would take us to another level. It did – a lower level,” Young says unapologetically. DeYoung will probably offer contrasting thoughts in his planned upcoming memoir.

“Dennis had led the charge with some great writing and singing. And yes, he, I, and Tommy all made [each other’s] songs better. But Dennis really thought he had the answer to everything with this project, and it was the wrong thing. So we avoided playing ‘Mr. Roboto,’ because it left a bitter taste in our mouths.”

The irony of that song, Young offers, is that while “it alienated half our audience when it came out,” it was a hugely successful single. And it spawned the creation of a second generation of fans who were on the younger when they bought the 45.

Of course, Styx fans know “Mr. Roboto” is not the only song that has caused controversy over the band’s career. There was the “Satanic Panic” era of the early ‘80s when religious and parent groups claim to have found Messages to Mephistopheles hidden in all kinds of rock music. Styx was called out for their anti-cocaine song “Snowblind.” Written by Young (who sang lead) and DeYoung, its line “I try so hard to make it so,” when played backward, purportedly sounded as if an ethereal being was intoning “Satan moves through our voices.”


“It was a surprising shock to me. That came from people with entirely too much time on their hands!” Young – making a play on another song title - offers. “Anything played backward sounds Satanic to me! But it was free publicity. Maybe it turned some people off to us, but initially it made more people aware of us, and it certainly didn’t hurt!”

Young says that Styx is working on a new record, which he hopes to have out around this time next year. And finally, by any stretch, Styx is definitely on a list of bands who many think should be in the Rock and Roll Hall of Fame, but aren’t. At least yet. But you won’t hear Young pouting about their exclusion.

“It does not weigh on my mind in the least. There’s a lot of devilish politics involved and egos and personal friendships in the decision making process. I’m a huge NFL fan and I looked how [few] players actually get into the Hall of Fame there. It’s very subjective,” he says.

“What matters to me far more than that is having an audience come out and appreciate us in a live setting. If we get in there, we get in there. And if we don’t, we don't. But it doesn’t keep me awake at night. I don’t see how it would change my life in the least.”

For more on Styx, visit Styxworld.com
KEEP THE HOUSTON PRESS FREE... Since we started the Houston Press, it has been defined as the free, independent voice of Houston, and we'd like to keep it that way. With local media under siege, it's more important than ever for us to rally support behind funding our local journalism. You can help by participating in our "I Support" program, allowing us to keep offering readers access to our incisive coverage of local news, food and culture with no paywalls.
Make a one-time donation today for as little as $1.