Aly & AJ have included Houston on their 40-city tour. Photo by Parker Woods, courtesy of No Big Deal PR
A day off is a welcomed and not too uncommon occurrence in a routine work week. But for AJ Michalka, it’s sort of a rare commodity. Michalka is the busy actress who brings to life Lainey Lewis from ABC’s popular sitcom The Goldbergs and its spin-off, Schooled. She voices Catra on Netflix’s She-Ra and the Princesses of Power. She’s also half of Aly & AJ, the platinum-selling music duo she and her sister Aly Michalka formed more than 15 years ago. The band is in the middle of a 40-city tour, one that includes a stop at White Oak Music Hall this Saturday, supporting its latest release, Sanctuary.

Like AJ, Aly is an in-demand actress, whose CW series iZombie just premiered its fifth season. A day off seems a little improbable for these two we note while crashing one for a phone interview. AJ’s kind enough to spend some of hers talking about the new EP, which bowed May 10, and a special project she and Aly are raising money and awareness for on this two-month run of shows.

“Our work life is so complicated that we’re really simple people when we’re not working, so a day off for us is just self-care, whether it’s getting a massage, hanging out with our band, grabbing a great dinner. We’re big foodies — food is really important to us — finding a great restaurant in a random city,” AJ says of their down-time pursuits. “Taking time to read, catch up on a little TV. I just meditated. We’re staying at a beautiful hotel in Indianapolis on this gorgeous little suburban street. So, just finding the right place to stay and take care of yourself.”

Self-care is a lesson the sisters must have learned from successful careers that stretch back to their earliest work as Disney teen finds. They signed with Disney Music Group’s Hollywood Records in 2004 and their debut studio album Into the Rush went gold, which set them on course for a music career that’s included a platinum single, 2007's “Potential Breakup Song.” The music has had to timeshare with the sisters’ acting endeavors. Between them, they’ve had dozens of roles, in series like Phil of the Future, Hellcats, Two and a Half Men, The Guardian and Silicon Valley; and in films like Easy A and Grace Unplugged. They’ve been working more than half their lives, so we wondered what AJ recalled from a time before their days in the industry. 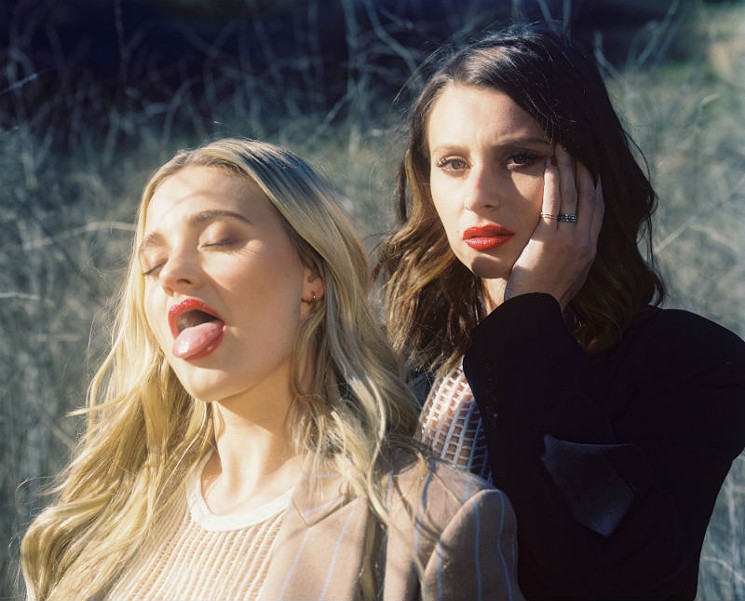 AJ Michalka and Aly Michalka have been working more than half their lives.
Photo by Stephen Ringer, courtesy of No Big Deal PR
“In some ways I feel like we’ve been doing this forever, you know; it’s been over 15 years and we’re only early 30s, late 20s. The days I remember before we hit the industry were days living in Seattle. We grew up in Seattle, Washington, we lived there for about seven years as kids,” Michalka recalls. “I remember the neighborhood well, I remember the school we went to, the friends we made, the bike rides in our backyard, the trails we would take to get to and from errands on our bikes. You know, it was a really simple time and that’s a beautiful place to grow up, so I do definitely recall a period of time when we weren’t in a professional industry. We definitely had a pretty normal upbringing, as weird as that sounds."

She says she’s really proud of Sanctuary, the five-song EP that released just weeks ago. The album’s synth-pop tracks have been largely hailed by critics, starting with “Church,” the record’s first single, which debuted in March.

“I’m excited. This is a big tour, it’s 40 cities in two months, we haven’t done that in a long time. Last year was about a month, it was like 20 dates, and we definitely got our feet wet again. Getting back in a live setting is really a specific aspect of our career that we weren’t used to, we had taken such a long break,” AJ notes. “Being back in it I’ve learned a ton in regards to how we want to dress onstage, in regards to how we want our lighting design to come off per song, in regards to what our band plays, what our set list consists of, and we’ve now figured out a really great rhythm.

“We play about 18 songs, we’re on stage for almost an hour and a half. We’re playing a collection of old songs, we’re playing music from the brand new EP, we’re playing music from the EP we released last year and I think between old and new we’ve got a really good rhythm paced out. And I think our fans are excited because they’re getting old songs that they’ve waited to hear for years but they’re also getting a taste of the new. The reaction between the old and the new has been really, really strong.

“You know, at first, Aly and I knew we had taken such a long break we kind of thought the fans would only care about the old music, you know, the hits that really kind of started our career,” Michalka continues. “But, as we’ve continued to play more and more shows, I see that that’s not really true. The new music seems to be really, really impactful. As soon as the EP dropped while we were on the road this month, fans knew the words. I mean, it was crazy seeing the reaction towards the new music. It’s neat to see that our fans are this engaged with the old and the new."

Their songwriting has long put them in a critically-hailed atmosphere some former teen pop stars never reach. AJ says she takes the reins on melodies and Aly focuses on lyrics. They work with some great collaborators, too, she notes, foremost Ryan Spraker, whom she considers the musical and production brain behind many Aly & AJ tracks. She says Yves Rothman is a collaborator on the new EP, “and I think he brought out some really great things in Aly and I.”

“I’m really proud of this music. I really think this EP, this collection of five songs, tells a beautiful story, not only when you listen to it on iTunes or wherever you play music, but also live. We start the set with ‘Church,’ which I think is a really strong song. I’m excited, we’ve played Houston before, but we’ve never played White Oak before and we have some great fans in Texas,” she says.

Aly & AJ have also teamed with The Trevor Project for this tour. The organization provides crisis intervention and suicide prevention services to LGBTQ young people and the sisters are helping raise awareness and funds during these shows.

Aly & AJ are teaming with The Trevor Project for this 40-show tour run
Photo by Stephen Ringer, courtesy of No Big Deal PR
“Aly and I have considered ourselves longtime LGBTQ allies and it’s really up to us every year to help make a difference and be a voice for our generation and we hope we can do that by teaming up with an organization every year like The Trevor Project when we perform,” she says. “Touring is such a wonderful, giving thing, but it can also be really selfish. Playing music every night, you’re on stage, fans are excited to see you – but, it’s a lot of me, me, me. And that gets old. Aly and I want to be actually giving back if we can. I think a way to do that, now that we’ve gotten older and understand what we believe in, where we lean politically, we really feel the need to team up every year with a nonprofit that we feel is doing incredible things for our community. The Trevor Project really rings true for us."

Michalka says Aly & AJ have many fans in the LGBTQ world and all fans who attend the concerts and make donations to the organization can win a chance to meet the sisters post-show, in a raffle of sorts.

“It’s kind of a cool incentive but it also proves just how wonderful young humanity still is. Our fans are so kind, they’re so wonderful and so driven to do good, it’s a really cool opportunity during the show where they get to donate to a great cause and have an opportunity to meet Aly and I backstage. We’ve raised a lot of money for [The] Trevor Project and I really believe in what they’re doing for LGBTQs as well as the allies surrounding them, and Aly and I are included in that.”

Aly & AJ seem to be included in all sorts of things. Staying so busy makes the odd day off all the more important. How does AJ plan to enjoy the day off, once we let her return to it?

“I’m actually hanging out on a hammock at the hotel and it's really beautiful out,” she adds.

Aly & AJ, Saturday, June 8 at White Oak Music Hall, 2915 North Main. Armors opens the all ages show. Doors at 7 p.m., $20-$25.
KEEP THE HOUSTON PRESS FREE... Since we started the Houston Press, it has been defined as the free, independent voice of Houston, and we'd like to keep it that way. With local media under siege, it's more important than ever for us to rally support behind funding our local journalism. You can help by participating in our "I Support" program, allowing us to keep offering readers access to our incisive coverage of local news, food and culture with no paywalls.
Make a one-time donation today for as little as $1.