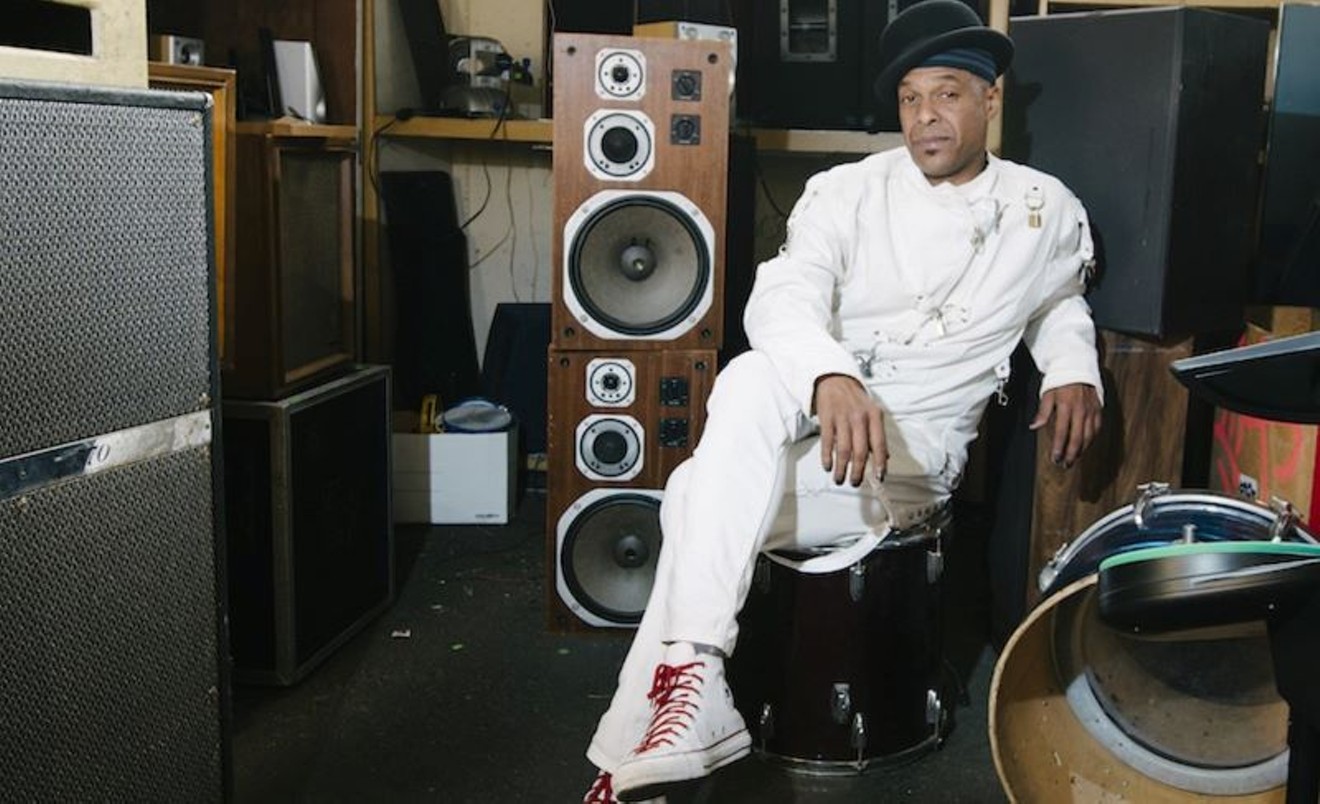 Angelo Moore and the Brand New Step will perform on Friday, May 20 at The Continental Club. Photo by Christine Zona
Everyone deserves a new opportunity in life. Just ask legendary frontman of Fishbone Angelo Moore. “Brand New Step has been a brand new step for me,” says Moore.

Angelo Moore and the Brand New Step will perform in Houston for the first time on Friday, May 20 at The Continental Club with Houston’s Swimwear Department and DJ Big E opening up the show.

“I can always say everybody deserves a brand new step, we all do but for me it's been a brand new step because it’s always good to have a different perspective of music and art,” says Moore.

“The Brand New Step is a different reason and perspective for me to play music aside from Fishbone, not to take away from Fishbone but sometimes I can't get certain things done there. It’s a whole 'nother genre of music. It’s dance music. It’s the disco ball in my life.”

Fishbone is known not only for Moore’s impressive and magnetic on stage energy that has made him one of the best frontmen of all time, but also for their ability to blend many genres ranging from ska, punk, reggae and metal all while spreading a socially conscious message.

“Fishbone is a lot more angry,” describes Moore. “Brand New Step is a lot more hippified disco. You got some bellbottoms, glitter and it's a lot more peace, love and hippie hugs going on.”

The project began in 2013 when Moore was approached by Austin-based Kris Jensen and producer Jim Greer approached him after a showing of the documentary Everyday Sunshine: The Story of Fishbone.

“I’ll try anything once and so I went up north to San Francisco and did some collaborations with those guys,” says Moore in his trademark, energetic and wholehearted way of expressing himself.

“It's one of those things where the band is spread out. It's not a local thing so when we do play, it's more of an operation than not to pull everybody together.”

Getting together physically isn’t the only challenge for the band. Moore describes how initially working with The Brand New Step was a creative challenge for him as the multi instrumentalist had never worked with samples and pre-made beats.

“I don't do that in Fishbone but it definitely put me in a place where I have to use a different perspective to appreciate the pre-recorded track because in Fishbone and the other stuff that I'm in, it's all real instruments and real musicians.”

Moore advises all of his collaborators to think about how those samples got created to begin with and to go ahead and learn the instruments needed to create the sounds they are seeking.

“I’m working to create the beats. Anytime I step into The Brand New Step I'm always coming from the school of play your instrument, do it well and make your own beats but if we are going to incorporate tracks into the music then it should be something like an accessory to the core thing,” he says likening it to getting ready for a night out where the outfit gets first priority over the details of jewelry and shoes.

“The reason why I play all these instruments that I play is because if the band that I'm in can’t manifest the idea for me. I don't want to be left out there not being able to produce a musical part because I’m depending on somebody else who isn't coming through for me so I gotta learn to play the instrument myself.”

Even though Moore plays a wide variety of instruments from saxophone, piano, organ, drums and the theremin, which will be a part of their live shows this week, it is his voice and lyrics that are the real show stoppers.

Moore, also known as Dr. Madd Vibe, is also a poet with three published books of poetry to his credit.  He's working on cataloging his lyrics online to give people easy access to his lyrics.

“Dr. Madd Vibe recommends that you arm yourself with a protective, prophylactic coat of consciousness,” he says smoothly.

“It’s to raise awareness,” he says. “I'm using words. You can get sound and intention out of a musical instrument, but you can't get the musical instrument to say a language and that's the first thing that people gravitate to or they recognize is the words.”

Even though Moore has been actively making music since ‘79, he has never lost his childlike enthusiasm and energy for making music and connecting with audiences. His life and work was recently documented in ForeverMoore; The Angelo Project set to be released on Amazon this summer.

“I’m thankful that I'm still playing music and making a living out of it since ‘79 man. I’ve only had two jobs, one was at McDonald’s and I got fired from that,” laughs Moore. “I always tell them don't grow up, it's a trap man.”

When asked what it was like to watch his life on film Moore says, “It’s a little trippy to look at me, people calling me an icon and a legend. I’m like, ain’t they usually dead when people talk about them?”

“I’m thankful. I’m going to do what I need to do to be able to stay here the longest and when it’s time for me to go, well then I’ll be out of this motherfucker but I’ll tell you, I’m trying to leave behind some really good stuff for the human race and the people on the planet to enjoy, learn from and smile throughout their lives.”

Angelo Moore and the Brand New Step will perform on Friday, May 20 at The Continental Club, 3700 Main. Doors at 8 p.m, $15-30.
KEEP THE HOUSTON PRESS FREE... Since we started the Houston Press, it has been defined as the free, independent voice of Houston, and we'd like to keep it that way. With local media under siege, it's more important than ever for us to rally support behind funding our local journalism. You can help by participating in our "I Support" program, allowing us to keep offering readers access to our incisive coverage of local news, food and culture with no paywalls.
Make a one-time donation today for as little as $1.